After a few years of effort, Advanced Micro Devices is finally shipping its ARM-based processor for data centers.

The Sunnyvale, Calif.-based chip design company hopes to fight the dominance of Intel with the AMD Opteron A1100 processor, formerly code-named Seattle. The chip represents the start of AMD’s effort to differentiate itself from Intel, which generates around $14 billion a year from the data-center server chip market, according to Gartner.

AMD acknowledged that the 64-bit ARM chip is coming out later than the company had wanted, but the feeling is, better late than never. In a press briefing, Dan Bounds, senior director of data center products at AMD, said that the company had to gather a full ecosystem of hardware and software partners in order to make the chip more useful for customers. That’s one reason the delay in the launch was both helpful and necessary, as those elements of the ecosystem needed to catch up. The chip is available in mass production quantities today.

“The core premise of ARM in the data center is to help drive lower costs,” Bounds said. “It’s not enough to provide choice. You have to provide choice that is tailored and right-sized for performance.”

AMD has customers in several segments, such as networking, storage, and web servers. And it has rounded up an army, albeit a smaller one than Intel commands, to get customers to buy the chip.

Analysts have a mixed view of AMD’s initial push into the data center with ARM. The initial chip, for instance, uses four or eight ARM standard Cortex-A57 cores, or brains, rather than a unique AMD core design. To really set itself apart, AMD needs to make use of its architectural license from ARM to create something more unique, said Gartner analyst Sergis Mushell, in an interview with VentureBeat.

“They will need a unique design for each market,” he said. “That’s the trick behind SOCs (system on chips).”

Linley Gwennap, principal analyst at the Linley Group, said, “The A1100 is not an exciting product. Its performance is no better than that of Intel’s Atom processor for microservers (Avoton), and it burns more power. It doesn’t support dual-socket (2P) servers. It uses a commodity Cortex-A57 CPU rather than a custom microarchitecture. AMD sampled the A1100 for more than a year but generated little customer interest. The chip may have better luck in embedded applications.”

He added, “CEO Lisa Su has refocused the company’s limited resources on finishing its next-generation x86 CPU, known as Zen, and de-emphasized development of the ARM-compatible K12 CPU. If Zen is successful, AMD will likely continue to focus on x86, as it is the only company (other than Intel) that can do so. If Zen is not successful, AMD probably won’t have enough money or time left to complete the K12 design.”

In an interview last week, Su said she was optimistic about 2016 and that there is a lot of anticipation around Zen. The ARM-based data center CPU project was started by Su’s predecessor, Rory Read. But AMD has been strapped for cash, leading to rumors that its K12 ARM-based processor (the more ambitious ARM project) has been de-emphasized.

Meanwhile, Patrick Moorhead, analyst at Moor Insights & Strategy, said that choice is good for the market. He said, “Long-term, AMD has a decent chance in the data center, given their historic strength and experience there and their unique ability to offer both x86 and ARM-based server solutions. I see AMD’s latest ARM-based solution as a ‘pipe-cleaner’ to get the needed experience in the nascent, ARM-based server market. AMD is targeting the right areas, too, [networking and storage], two areas that don’t necessarily need the raw horsepower of a custom CPU core. I am looking forward to larger server cores that could address an even wider variety of workloads.”

Tim Bajarin of Creative Strategies framed things in a similar light, “This processor has been in the works for quite a while and is part of AMD’s commitment to build on the ARM Cortex ecosystem and deliver high performance, low voltage chips for this part of the market. It should help AMD become a serious player in this area and gain new customers who value the price and performance of what AMD is offering.”

And Paul Teich, analyst at Tirias Research, weighed in, noting, “I think a solid goal for AMD over the next three to four years would be a half-a-billion-dollar-a-year business for ARM server processors. A billion-dollar annual run rate would be a stretch by 2020, but maybe attainable, depending on market conditions.” 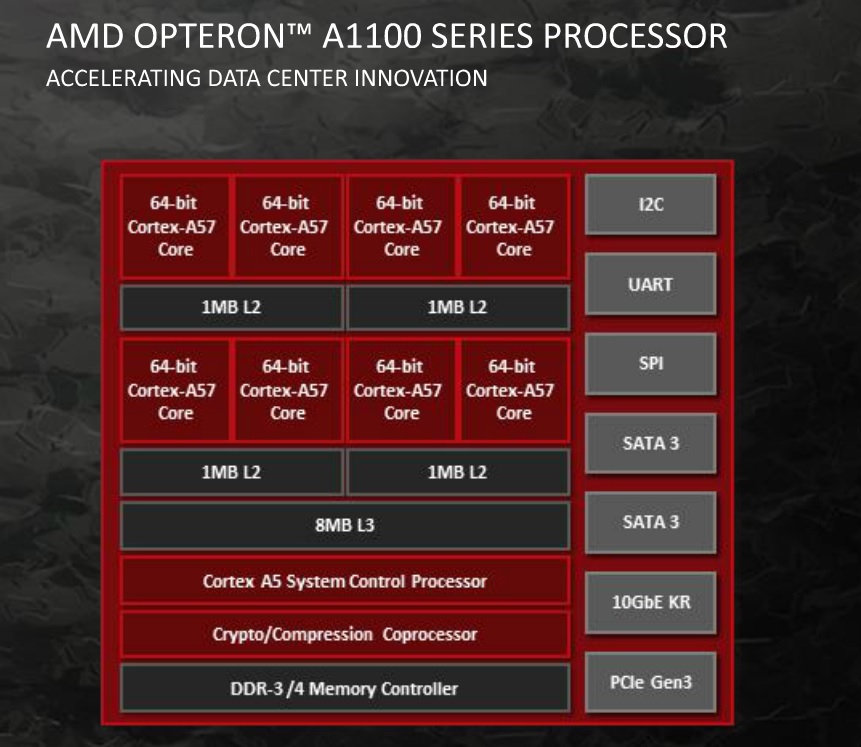 The focus on ARM architecture, at the heart of most low-power devices (such as smartphones and tablets), is a big switch for AMD, which, like Intel, has depended upon the PC-based x86 architecture for decades. But x86 generates more heat and consumes more power than ARM chips. ARM chips, meanwhile, haven’t historically handled the 64-bit software that is common in data centers, and it hasn’t handled the heavy-duty workloads that x86 processors are capable of handling.

Rather than take on the whole x86 server chip market, AMD is targeting the chips at networking devices, storage equipment, and low-end servers. (AMD continues to make its own x86 server chips, as well). The eight-core AMD 1170 chip operates on 32 watts, while the four-core AMD 1120 operates on 25 watts. The chips are priced at $150 and below.

As for the delay, Bounds at AMD explained, “There was some maturity in the silicon we had to work through. For the server space, it was the first time we brought to market an enterprise-class part using ARM. It took significantly longer than we intended. But the readiness of the ecosystem — a lot of that happened in 2015. We would have loved to have it much earlier. We are happy to have it in 2016.”

“Intel takes any competition seriously, but the ARM hype over the past 6-plus years has not met the reality when it comes to server deployments. Intel is not standing still though and believes ARM vendors will face an even greater uphill battle with the addition of the Xeon D SoC line and our ability to deliver custom silicon solutions to larger cloud providers. The x86 software ecosystem and consistency of architecture also continue to be a fundamental advantage that will make it difficult for any alternative architecture in the data center from a compute perspective.”

Other AMD rivals, including Applied Micro, Qualcomm, Amazon’s Annapurna, Tilera, and Cavium have also gone after data center revenues using the ARM architecture. But, so far, ARM’s presence in servers is tiny, at perhaps $10 million a year, said Mushell.

“It’s a nascent business,” he said.

Still, ARM’s own executives are excited to get a wedge into the data center in their wider war with Intel.

“The AMD Opteron A1100 processor brings a new choice in scalability across network infrastructure and data centers,” said Lakshmi Mandyam, director of server systems and ecosystems at ARM, in a statement. “AMD brings recognized expertise in the server and embedded markets, making them an ideal partner to deliver a 64-bit ARM processor with the impressive balance of performance and power-efficiency to address an increasingly diverse set of workloads.”

Partners and customers have been trying out the chip for several quarters.

Bounds said that the AMD chip will be used in enterprise hardware from SoftIron with its Overdrive 3000 system for developers, as well as in an upcoming lineup of software-defined storage solutions. SoftIron CEO Norman Fraser said the AMD chip is ideal for moving large amounts of data around quickly.

AMD is also collaborating with Silver Lining Systems (SLS) to integrate SLS’ fabric technology into innovative dense server designs that are targeted at streaming, web-page serving, and storage workloads for cloud and hyperscale data centers. Red Hat, maker of enterprise Linux operating system software, also expressed its support for the AMD effort, hailing it as a “major milestone to the ecosystem.”