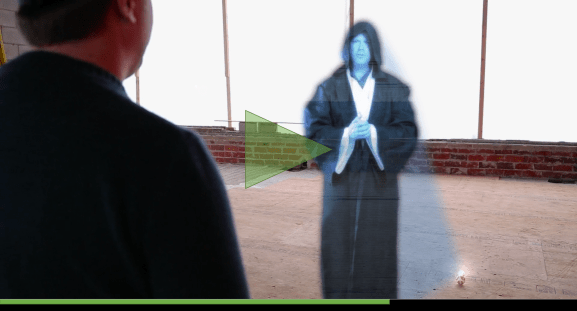 Vidyard, the business video platform, today announced it has closed a $35 million Series C round.

Vidyard’s platform hosts business video content for distribution to websites, and social channels. It tracks visitors based on their individual viewing history, and gives marketers tools for analyzing and optimizing video marketing to aid lead generation, and customer conversion. The company was founded in 2010.

And, in a move that can only be described as “eating its own dog food,” the company has announced the raise with a Star Wars-inspired video.

The round is led by Battery Ventures, with participation from existing investors Bessemer Venture Partners, Salesforce Ventures, OMERS Ventures, iNovia Capital, and SoftTech VC. Battery Ventures’ Michael Brown is clearly over the moon (of Endor) about the deal — he dresses up as a Jedi master in the announcement video.

What will Vidyard do with its latest round of funding, which takes the total raised to $60.7 million?

“Use of proceeds is a surprisingly straightforward answer,” Michael Litt, CEO and cofounder at Vidyard told me. “Firstly, in order to maintain 3x-plus year-over-year growth, you need to invest continuously in marketing, sales, and customer experience. Our customers are very direct with respect to how they’d like to see our technology develop in the future. Our challenge is converting those wants into broader needs.”

Video is one of the hottest trends in digital marketing, now accounting for 64 percent of all Internet traffic. Cisco predicts that number to rise to 80 percent by 2019.

As VB reports in its recent video content research report, Facebook announced in June that it was delivering over 4 billion videos daily. By September, that number had doubled to 8 billion.

And in B2B markets, video is becoming more important than ever. According to Social Media Examiner’s social media marketing industry report, 72 percent of marketers will increase their production of original video this year.

The funds won’t only go toward supporting growth.

“The more interesting use of proceeds surrounds what we do for video beyond marketing,” Litt said. “Look to see us tackle the entire business with video in the near future.”

Part of that challenge is in the measurement and understanding of video analytics, a complicated area for marketers to get their teeth into.

“We call video analytics ‘digital body language’ because you can learn so much more from a viewing session based on second-by-second insights,” Litt said. “Most analytics platforms can only track clicks or downloads (and most of those downloads are never opened or explored). We collect much more tangible and actionable intent.”

Intent data is a more complex area of focus than standard analytics, so what questions will this pose as Vidyard heads into that territory?

“With huge volumes of intent data comes massive responsibility,” Litt said. “How do you surface those trends and viewing sessions into actionable insights? How do you drive attribution and ROI to a single dollar? How can you use this information to surface the effectiveness of training or internal communication?”

Those are the challenges Vidyard is taking on with some of this funding.

And what of Facebook, Google, and Snapchat, who are dominant in video at this time?

“YouTube, Facebook, and Snapchat have increasingly large roles to play in the consumption of digital video for consumers,” Litt noted. “That said, no video marketing strategy is complete without fully defining the role that these massive social platforms have in distribution and viewer acquisition. However, these platforms should be considered ‘top of funnel’ channels — the buck doesn’t stop with social.”

“There is a massive difference between earning, owning, and buying an audience that all brands must consider,” Litt said. “I think we’ll see an exponential increase in the number of brands that host and manage their own video destinations, with an interest in managing pipeline and prospects further down the purchasing funnel.”

The future then, according to Litt, is about ignoring vanity metrics. Instead, businesses that move toward creating original video content to support every stage of the buying cycle need to focus on the metrics that help to explain customer behavior.

“View counts don’t do much to help you identify which buyers are the most interested in your products or services,” Litt said.