Now independent, PayPal is busily attempting to prove itself as a strong mobile payments company. Meanwhile, the industry is flooded with competition — particularly relative newcomers Apple (with Apple Pay) and Google (with Android Pay and Google Wallet).

PayPal revealed it would finally cash in on Venmo last quarter with “Pay With Venmo,” a plan to let Venmo users pay for things where PayPal is accepted. Now the company, still pretty tight-lipped about the whole thing, says it’s moving ahead with the strategy:

PayPal also expanded the ways to use the popular social payments app Venmo by introducing the ability for Venmo users to make in-app purchases at participating merchants in the U.S. Now in limited release, select users can use Venmo to pay for concert and sports tickets on Gametime, and gourmet meals delivered on Munchery. The pilot program will gradually open to more consumers and merchants with a general public launch planned for later this year. 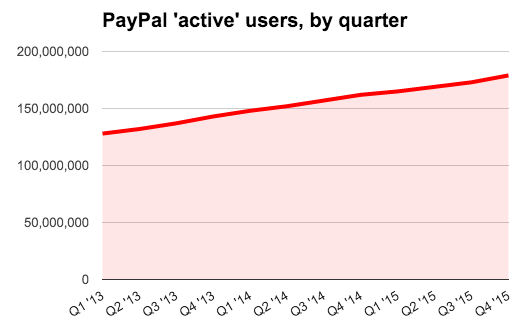 During PayPal’s fourth fiscal 2015 quarter, the company raked in $2.6 billion in revenue and $0.36 (non-GAAP) earnings per share. Analysts had, on average, expected PayPal to report earnings of $0.35 per share and revenue of $2.51 billion for the quarter. After PayPal surpassed expectations, investors briefly drove the company’s stock up by more than 7 percent in after-hours trading.