In 2015, marketing tech swelled in deal sizes, frequency, and valuations like never before. 2016 is off to a similar start. In a new MoneyTree Report from PWC and the National Venture Capital Associate, VCs cooled on later-stage growth investments, particularly in tech, at the end of last year. Whether that’s due to fluctuating financial markets, markdowns from institutional investors, global conflicts, or other factors, investors are shifting the model to value revenue over growth in the later stages.

But it’s the exact opposite for new funding. VCs are still stepping on the gas for early and seed stage companies, particularly in marketing tech. We’ve tracked every one of those investments, and they’re starting to paint a clear picture of what it means for marketers, CMOs, CIOs, and even sales teams.

Namely, you better step up your data analytics game, stat.

In a new VB Insight report on Q4 venture capital funding, we tracked $7.4 billion in moving money (new funding and exits) for marketing tech in Q4 of 2015 alone. The volume of deals, in amounts, frequency, and categories of software are all trackable and trending a few very specific ways.

Data management, if it isn’t already, will be a priority for CMOs in 2016:

This rise in customer data invariably means a rise in the sheer volume of enterprise data. Evolving customer expectations and real-time marketing trends necessitate a need for faster data processing and simplified data access. Companies are generating more data than ever, while the window to batch and process it (and deliver it with context) is shrinking to real-time.

Queue the seemingly limitless ascent of data analytics platforms. By some accounts, even specialized areas of analytics like predictive marketing will be a $30 billion (or $100+ billion, depending who you’re asking) industry in five years. We’re hard pressed to disagree. Take a look at the funding data for 2015: 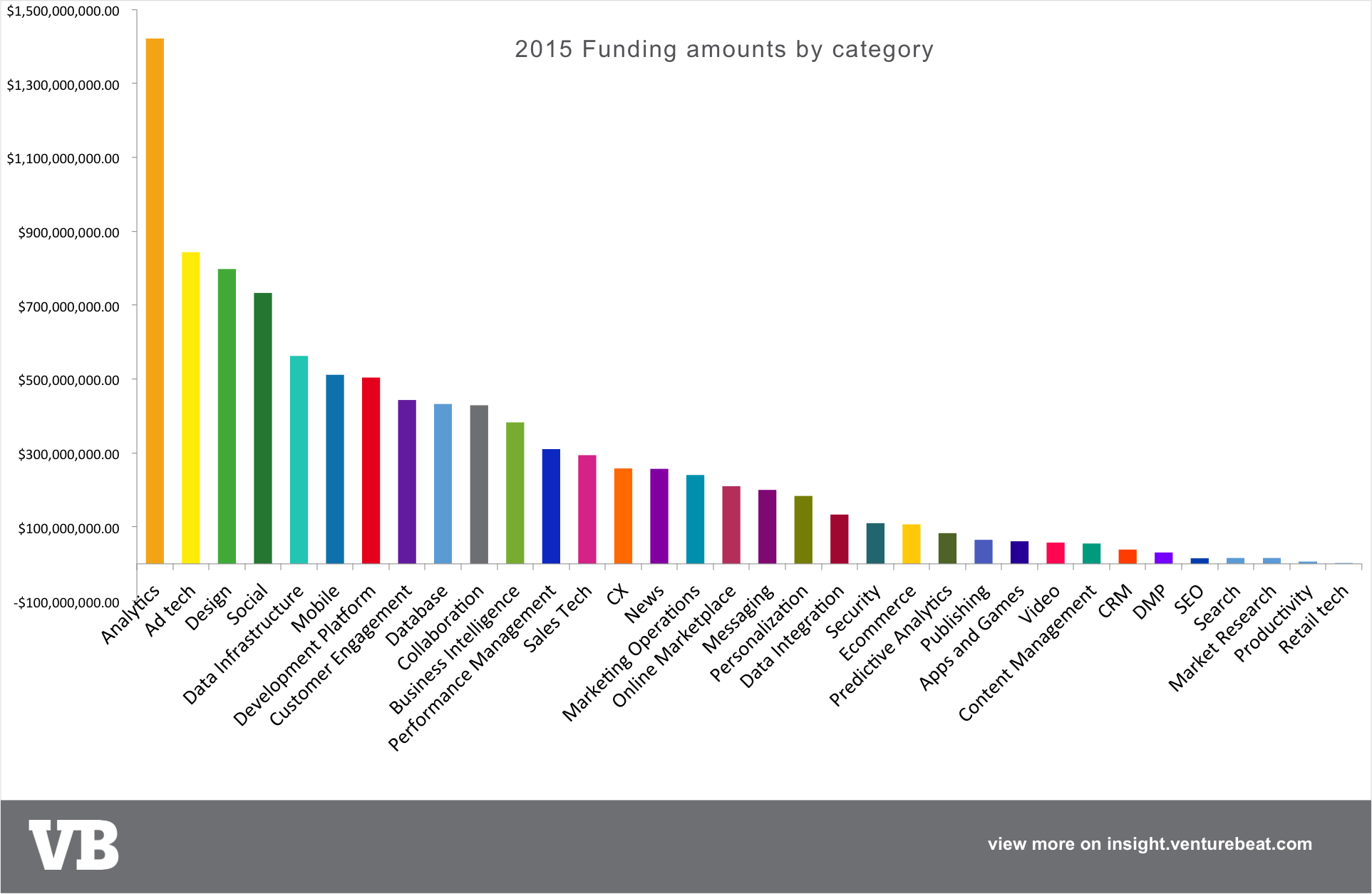 That’s nearly $1.5 billion funneled into pure play analytics startups — these are dashboard companies, journey-mappers, audience-measurers — nearly all with super sophisticated data-mining pulling from proprietary databases. It’s a dart throw for who’s going to win right now, since the use-cases for big data for marketers are still coming to life and the models are still being created (i.e., tell Teradata you invented predictive analytics, and you’ll get laughed out of the room).

The full report includes an in-depth analysis on Q4 activity, as well as the full data from 2015 — and is available on VB Insight.

While the early part of the year saw huge dollar amounts given to customer-facing tech like programmatic advertising, it appears VCs have cooled on that opportunity as the state of delivering ads continues to be too convoluted for marketers to safely spend money on (but they’re spending it anyway, in record figures).

Backbone/infrastructure players should come last, given recent developments in database technology and firmly entrenched players in major categories like CRM. However it’s a rapidly growing category led by a handful of big dollar deals (AppDirect for $140 million, AppDynamics for $241 million, Twilio for $130 million, CloudFlare for $110 million, GitHub for $250 million, Unisys for $350 million — to name a handful).

In the meantime, join me for a live webinar on the topic today (or listen later) with some excellent speakers, including: