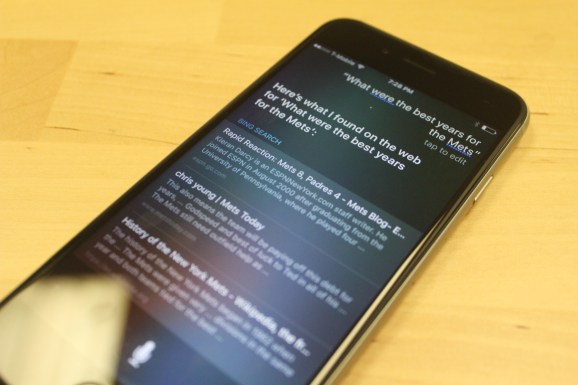 Apple has published four job postings that reveal the company’s intent to make its Siri personal digital assistant more capable when it comes to fielding queries about sports. Potentially, that could make Siri a more essential companion for resolving debates at the water cooler.

The job postings, with the job title “Siri Software Engineer — Sports,” are identical. People chosen for the jobs will work at Apple headquarters in Cupertino, California.

“The Siri team is looking for someone with a combination of strong technical skills, a desire to build exceptional customer features and a deep love of sports,” Apple says in the job postings, which have gone live in the past two weeks. “We’re looking for the right person who can collaborate with other engineers in several technical areas to help build Siri’s knowledge of all things sports related. You should be able to thrive in a fast-paced environment with rapidly changing priorities, have a thirst for new technology and believe that managing your Fantasy Football team is as important as managing your 401(k).”

Artificial intelligence (AI) experience is a requirement for the job, the job postings say.

Working on a product as popular as Siri can be tempting for researchers eager to have an impact in the real world. But in recent years Apple has not published many academic papers describing its artificial intelligence technology, much less shared its AI software with the public under open source licenses, as Baidu, Facebook, Microsoft, and Twitter have done. That relative lack of openness has made it harder for Apple to recruit AI talent, as Bloomberg has reported.

In the past year Apple has acquired artificial intelligence companies Emotient, Perceptio, and VocalIQ. Siri itself arrived at Apple as a result of the 2010 Siri acquisition.

That doesn’t mean Apple has completely given up on hiring people well versed in AI one by one, though. In this case, Apple is also looking for people with domain-specific knowledge.

In order to be qualified for the new Siri jobs, candidates must have an “encyclopedic knowledge of sports — and wish that Siri did as well.” The job posts also mention that these people will integrate “live service providers,” which could result in more informational responses from Siri. Currently Siri pulls sports knowledge from sources such as Yahoo, Major League Baseball, and the National Basketball Association. When Siri doesn’t know the answer to a question, she’ll serve up a few Bing search results and Bing search query suggestions, which don’t always help right away. (Don’t ask about boxing, cricket, golf, MMA, NASCAR, or tennis.)

Apple has gradually given Siri more sports proficiency since she became part of iOS in 2011. Starting in iOS 6, she could offer up standings, schedules, and player statistics. With the arrival of iOS 7, Siri could identify her favorite teams. And iOS 9 gave Siri the ability to provide scores, schedules, and websites in response to the mere mention of a team.

The sports category of the Siri page on Apple’s website currently shows off three example questions that are marked as “new,” including “Who won the NBA Finals?” and “Who’s the quarterback for Dallas?” The use of the past tense in the first question and the lack of the team name — only the name of the city, which has two major sports teams other than the Cowboys — in the second question demonstrate the evolution of the natural language processing software working behind the scenes in Siri.

Apple has improved the visual presentation of sports information in Siri over the years, too. Additions include team logos and player head shots.

Looking beyond sports, Apple has previously published job openings for Siri software engineers in other categories, like music and HomeKit.

But the new job postings prove that Apple executives believe Siri could definitely be more of a sports nut.