BARCELONA, Spain — BuzzFeed is doubling down on its video efforts with an all-new standalone mobile app. 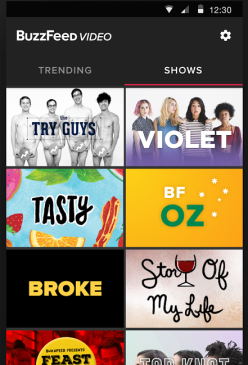 Jonah Peretti, BuzzFeed Founder and CEO, took to the stage at Mobile World Congress (MWC) in Barcelona today to announce the aptly titled BuzzFeed Video, which pulls together some of the best videos from the main publication’s existing catalog.

Available for Android and iOS, the app lets you watch, discover, and subscribe to all the usual BuzzFeed clips. You an also search specifically for “trending” videos if you want to cut straight to the viral goodies.

Founded by Jonah Peretti and John Johnson in 2008, BuzzFeed has cemented its position at the head of the viral news realm, and today claims more than 200 million unique monthly visitors. The listicle-loving media outlet raised $200 million last year, bringing NBCUniversal on board as an investor in a move that signalled BuzzFeed’s future intent.

“BuzzFeed and NBCUniversal will be great strategic partners, and we both have a lot to offer the other,” BuzzFeed’s executive chairman Kenneth Lerer said at the time. “We look forward to collaborating on television content, movies, the Olympics, and joint partnerships with ad agencies and brands.”

Against that backdrop, the fact that BuzzFeed has now launched a video-specific mobile app makes absolute sense, and it’s worth noting here that it uses its own video player within the app — it’s not just a bunch of curated YouTube videos.

When you consider that YouTube and Facebook have been slugging it out on the digital video front lately, with the former also now serving up original shows as part of a monthly subscription, it’s clear that video is playing an increasingly pivotal part in the fight for eyeballs and maximum mindshare. And BuzzFeed wants in on the action.