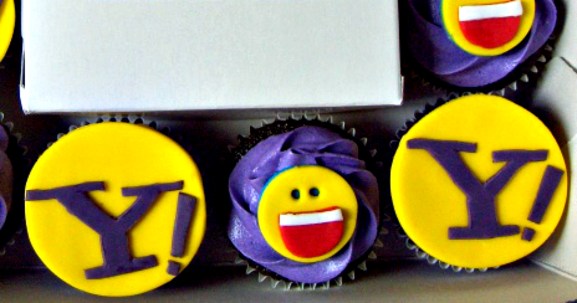 Here's a picture of cupcakes with the Yahoo logo. Yo.

When it comes to acquisitions, Yahoo has a long and illustrious record of overpaying for companies and then running them into the ground.

Which brings us to Tumblr. Yahoo paid $1.1 billion for the company in 2013. Now Yahoo has revealed it may write down the remaining goodwill on that deal, meaning it believes the once-hot blogging platform has run head-first into a concrete wall and fallen into a coma from which it is not likely to recover.

Which puts us in a reflective mood. Where does this particular digital pratfall rank in the history of Yahoo deal hijinks? Let’s go to the numbers and see what there is to learn about four other candidates:

1. Broadcast.com: Tough to top this loser. Yahoo paid $5.7 billion for this company in 1999 to get into streaming online content, only to shutter it a few years later. Yes, it was dot-com bubble money. And yes, everyone was doing a lot of dumb stuff in those years. But still, $5.7 billion! Also, it made Mark Cuban, the head of Broadcast.com at the time, insanely rich and let him buy an NBA team and become just overall a suffocating presence that we can’t escape.

2. GeoCities: Yahoo paid $3.6 billion for this dandy that let people who knew nothing about the Web make web pages. Fortunately, this was also mostly shut down, and nearly all of its content vanished, saving most of us from a lot GIF-induced embarrassment.

3. Overture: Yahoo paid $1.63 billion in 2003 for this search engine firm after belatedly realizing that some upstart called Google was eating its lunch. Spoiler alert: Google won.

4. Right Media: With social media becoming a thing, Yahoo bought this company in 2007 for $850 million in the hopes of getting a piece of the social advertising pie. Nope.

By a dollar value comparison, Tumblr would slide into the slot between Overture and Right Media. On the other hand, having proved a dud after only a little more than two years is pretty quick, even by Yahoo standards. So it’s tempting to move it up a slot or two.

But for now, we’ll leave it at four and let history marinate it for a while.

Honorable mentions: Yahoo bought ecommerce site Kelkoo in 2007 and sold it in 2008 for under $100 million. Of course, for many, the mismanagement of social sites like Flickr and Delicious were painful to watch, but those deals were quite small in terms of dollar value.