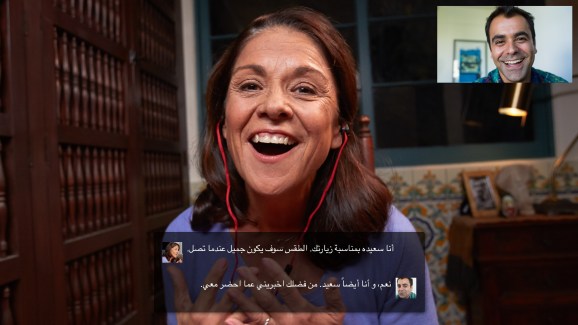 The feature is only available in Skype for Windows (all users of that software gained access to the feature in preview in January). Microsoft first unveiled Skype Translator in May 2014.

Microsoft selected Modern Standard Arabic (MSA) for use in the Skype Translator, as the Skype team wrote in a blog post: “Unlike dialects which may vary greatly from country to country, MSA is used throughout the Arab-speaking world in written and formal communications. This version of Arabic is taught in schools and used by journalists, for example.”

The deployment of new language is a result of Microsoft collecting an increasingly large amount of data and then training a model to become more and more accurate. In other words, Microsoft has built up technology for Arabic translation that’s good enough to roll out to its users, albeit only for Windows and still in preview.

This week, I got a chance to take Skype Translator for a 15-minute spin ahead of the release of Arabic support. Here and there, the system made mistakes in translating both my English words into Arabic and the Arabic words from the woman I was speaking with into English. The results were sometimes funny, because sentences didn’t always look or sound grammatically correct or complete. A few times she had to repeat herself once or even twice in order to get her message across. For instance, when she was trying to say “I have some work to do,” the translation at first came out “I have a bad worker.”

But all was not lost. With enough patience, I usually got the message.

Perfectionists might not be satisfied with Skype Translator’s work in Arabic right now. But in a press briefing last month, Skype corporate vice president Gurdeep Pall pointed out that being able to translate from one language into seven others and then back — in addition to the more than 50 languages supported in chat message translation — is actually quite significant.

“One of the fundamental issues of AI has been trying to meet the bar of human intelligence,” Pall said. “What if I told you that bar is actually the wrong bar? Because these systems now are able to do something that most human beings can’t do.”

To turn on Skype Translator for Arabic, click the globe button in the chat window with a given user, and you can select that language for both chat messages and spoken language.