Machines are kicking our butts in board games. We might as well give them sports, as well.

Bowing to the inevitable, the government of Dubai, the largest city in the United Arab Emirates, is rolling out the red carpet for our future ruling class by announcing plans for a robot Olympics in December 2017. Government officials said the three-day event, officially dubbed “World Future Sports Games,” will be held every two years and that it will work to build sports leagues for robots and other future machine thingies around the world.

No, no. Just kidding. The ninth one is “cybathlon competition.” No idea what that is, but, Okay. 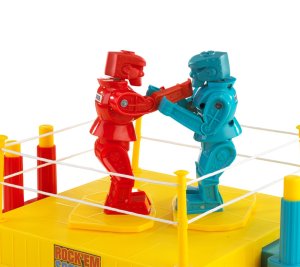 Above: Live from the Robot Olympics 2017.

The announcement of games came at the tail end of the World Drone Prix in Dubai on Saturday. That event and its $250,000 prize was won by a 15-year-old British kid. The drone race turns out to be just the beginning of Dubai’s ambitions.

“Today we start a new phase in our march to the future through the launch of these unique initiatives that are built on the success of our global platforms, the UAE Drones for Good Award and UAE AI & Robotics Award for Good,” said His Highness Sheikh Hamdan, Crown Prince of Dubai, in a statement. “Over the last two years, these platforms have attracted thousands of entries and hundreds of teams from around the world to strengthen the position of the UAE in the field of innovation at the global level.”

If this comes to pass (and really, what could go wrong?), it would appear Dubai is beating Japan to the punch. Japan is hosting the human-based Summer Olympics in 2020. But the country had announced plans to host a parallel robot Olympics, as well.

In any case, here is the final race of the drone event, which you should absolutely not watch on a full stomach.