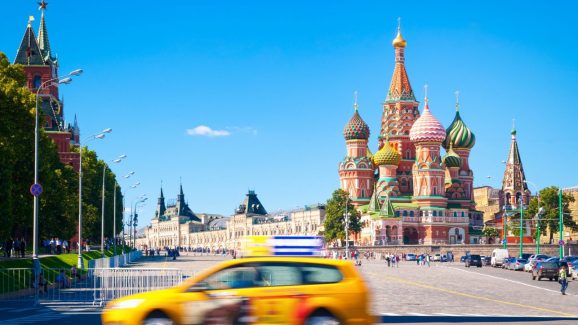 Red Square with the Kremlin and St. Basil Cathedral with yellow taxi car in foreground.

Uber has reached an agreement with Moscow transport officials that gives the e-taxi giant an official green light to continue operating in the Russian capital.

The news comes a little over a month after the Moscow Department of Transport (DoT) threatened to ban the American app-based service unless the company agreed to use officially registered taxi drivers and share travel data with local authorities.

There was never much doubt that Uber would put pen to paper on the deal (an agreement was originally anticipated last year), but the company has delayed proceedings until now. The long and short of this news is that, in contrast to the way Uber operates in most other cities around the world, the Russian branch of the service won’t allow any Tom, Dick, or Harry to sign up as drivers — only those with DoT-licensed cars will be able to drive for the app.

Speaking to local Govorit Moskva radio station last month, DoT head Maxim Liksutov explained why the company needs to take this extra measure: “Unfortunately, federal legislation doesn’t clearly regulate the work of online taxi services. We must sign an additional agreement with the companies,” he said. In other words, DoT is applying its existing legislation to all taxi-style companies, irrespective of the technology they use. Other online cab firms in the region, including Gett and Russia’s very own Yandex, have already signed this agreement, so it seems that authorities aren’t singling out Uber.

As for sharing travel data with authorities, well, this is something Uber has already done in other cities, including Boston, where it kicked off a big-data initiative with city planners last year. Given that Uber holds a plethora of location-focused information, cities can harness this data for the greater good — to relieve traffic congestion, expand public transportation, manage urban growth, and reduce pollution.

“Moscow has one of the highest rates of car ownership in the world and suffers from chronic congestion as a result,” explained Dmitri Izmailov, general manager of Uber Russia, in a statement. “According to a study by TomTom, bad traffic means that Muscovites spend twice as long as they should in their cars. And with Russia set to become Europe’s largest car market by 2020, this issue will only get worse over time.”