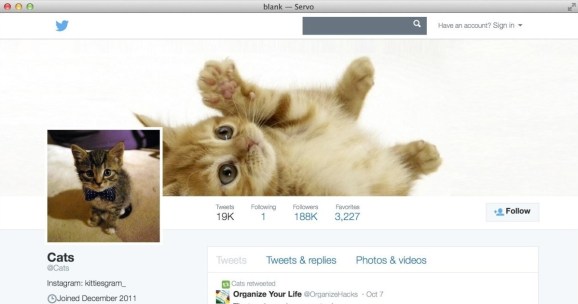 In just three months, Mozilla will ask developers to try out Servo, its new browser engine. The news was first revealed in a Google Groups posting, and we reached out to Mozilla for more information. “This June, Mozilla Research plans to release the first tech demo of Servo, a next-generation browser engine focused on performance and robustness,” Jack Moffitt, Servo project lead at Mozilla, confirmed to VentureBeat.

Back in April 2013, Mozilla and Samsung announced plans to develop a “next generation” web browser engine using the Rust programming language. They wanted to rebuild the browser from the ground up on modern hardware, ignoring old assumptions that had to be made before multi-core and parallel hardware were the norm. The ultimate goal at the time was to bring the technology to Android and ARM, but the two companies did not share a launch timeframe.

Servo has come a long way since then (it’s being developed for Windows, Mac OS X, Linux, Android, and Firefox OS), but Moffitt still describes the project in similar terms: “Servo re-imagines the architecture of the browser in the modern landscape of multi-core computers, GPUs, and safer programming languages.”

“Along with the tech demo of Servo, we will be including a proof-of-concept browser UI, written entirely in HTML, CSS, and JavaScript, called Browser.html,” Moffitt added. “This new UI includes many rich animations and interactions that you would find in native applications but that don’t always perform well in current browsers. Browser.html is a great test case for Servo’s technology platform and a showpiece for what’s possible with the new technology.”

While that is definitely exciting, keep in mind that Servo is nowhere near ready. The Google Groups posting states Mozilla has very basic goals for the first tech demo:

Beside rendering perfectly browser.html, we would like Servo to be capable of running github, duckduckgo, hackernews and reddit. We’re close, but there are still several rendering and functional issues for each of these websites.

The June tech demo launch is meant to give developers a chance to play and experiment with Servo. Mozilla hopes that the Servo engine “will set a new bar for web engine performance.” And of course, the technology will be applied across the company.

“We are exploring various avenues for incorporating the Servo engine and technology into existing Mozilla products,” Moffitt told VentureBeat. “In particular, we’re working with the Mozilla platform team to incorporate components of Servo into the Gecko engine that powers Firefox. In the long run we hope Servo will provide key improvements to both Firefox and future Mozilla products.”

Mozilla expects Servo will be used not just in browsers, but in many kinds of applications built on web technology. That’s the real objective for the upcoming tech demo: to see if developers can put Servo to use in ways that Mozilla hasn’t.