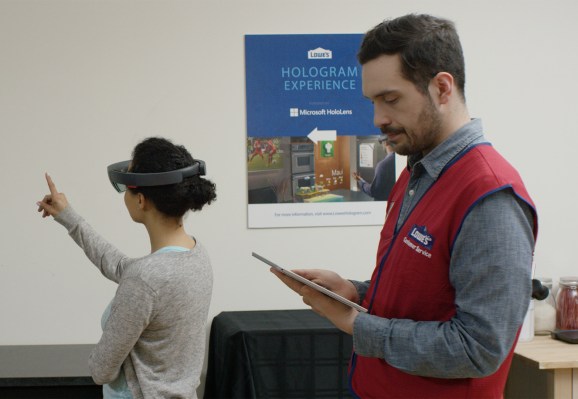 Yes, that's right, the HoloLens is coming to Lowe's.

Microsoft today unveiled its latest partnership around its HoloLens augmented reality headset. Lowe’s, a company with a chain of home improvement stores, will bring HoloLens into some stores in the Seattle area — that is, within driving distance of Microsoft headquarters in Redmond, Washington — and allow shoppers to customize kitchens using holograms.

“Lowe’s is using HoloLens to demonstrate a variety of design options for kitchen cabinetry, countertops, appliances and features like backsplashes, in a visually-rich and interactive way,” Microsoft HoloLens general manager Scott Erickson wrote in a blog post. “Lowe’s customers will be able to experience a holographic representation of a completely new kitchen, adjust finishes and options instantly, and share their designs easily online.”

After the Seattle pilot, Lowe’s locations in Raleigh, North Carolina will get the HoloLens, Erickson wrote.

This industry partnership is interesting because it’s going to let ordinary people play around with HoloLens. Microsoft has previously announced partnerships with Case Western Reserve University and the Cleveland Clinic to help students learn about procedures, and it has also given NASA astronauts access to HoloLens. Microsoft is also working with Autodesk around 3D product design. That collaboration could make HoloLens a tool for the industrial designers in the workplace.

But anyone, really, can shop at Lowe’s.

And this should be a great example of how augmented reality could be a fit for retail stores. Virtual reality, by contrast, removes you from your current environment. but augmented reality technology like what the HoloLens offers will allow people to add to what they see around them. It could also come in handy at home, when you’re thinking about remodeling.

“In the same way that people often place tape or cardboard outlines of new furniture in their living rooms to properly assess size and scale relative to physical options — imagine a more high-quality, easily modifiable replacement to that task, powered by holograms,” Erickson wrote. “Imagine a view of your custom kitchen, within your existing kitchen space or reviewing options for a brand new dining room table and chairs without ever leaving home.”

Developers can now preorder a HoloLens Development Edition for $3,000.