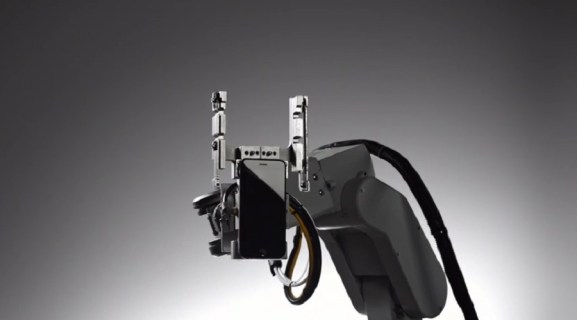 Apple gave a nod to the environment today at its iPhone SE product introduction event, noting that 93 percent of its facilities now run on renewable energy.

At today’s event, the company introduced a video of “Liam,” a robot that can take apart an old iPhone and separate the parts so that they can be recycled. Liam can deconstruct an iPhone, detect its parts, remove them, and then separate the parts.

The robot can rescue cobalt and lithium from the battery, separate gold and copper from the camera, and extract silver and platinum from the main logic board. The robot is a research and development project that shows Apple is trying to be innovative about its impact on the environment.

She said that Apple set its goal two years ago of having 100 percent renewable energy for its facilities in the United States. Today, about 93 percent of those facilities are relying upon energy sources such as solar, wind, and water. Apple has also made progress with Renew, a program to recycle older devices. In Singapore, the company plans to roll out 800 rooftop solar arrays to power its future stores, Jackson said.

In China, Apple has built a 40-megawatt solar farm that it says doesn’t disturb the locals and can power the company’s 19 local offices and stores in the region. And Apple said 99 percent of its packaging now comes from paper that is recyclable.

The environment topic was interesting in that it was the second thing that Apple CEO Tim Cook started talking about, just after explaining Apple’s position on privacy in relation to its feud with the FBI over access to the San Bernardino shooter’s iPhone.