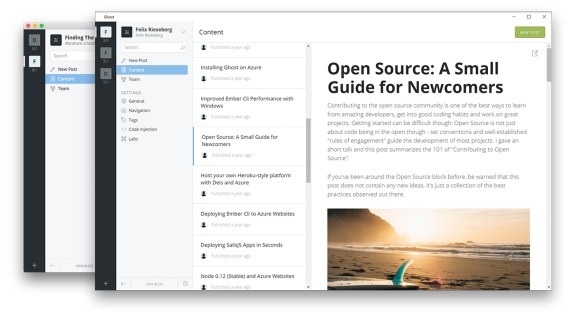 The Ghost open-source software project today announced the beta release of a desktop app for Mac, Windows, and Linux. The tool allows people to update their Ghost blogs right from the desktop, so you no longer need to go to a website to do that.

Like the Ghost software itself, the desktop client is available under an open-source MIT license on GitHub.

“We’d absolutely love feedback from developers about what’s working well, what’s broken, and what we should prioritise before the first public release,” Ghost founder John O’Nolan wrote in a blog post. “So if you have thoughts, or you want to get involved directly, please do contribute to issues on GitHub.”

Ghost is a simple alternative to the popular WordPress content management system (CMS) software, and indeed O’Nolan previously worked on WordPress. The project was first released in 2013.

The people behind the Ghost project offer a hosting service for blogs that use Ghost as the back end, but they can also be hosted on clouds such as Google Compute Engine or DigitalOcean.