DoorDash, the SF-based company that lets people order food from their favorite restaurants for a fee, this week announced it has raised a whopping $127 million to accelerate its business.

It’s not wasting any time making its next moves: Today DoorDash is releasing a new feature, called a “Delight score,” that rates the food delivery quality of the restaurants it works with.

While DoorDash acknowledges that its score differs from Yelp’s quality scores — in that DoorDash’s scores are based only on the food delivery experience and do not include the indoor decor and ambience — the system is designed to be superior to Yelp’s on several counts.

And let’s face it. The DoorDash score boils down mostly to food quality, which is a good part of what Yelp scores are trying to get at. 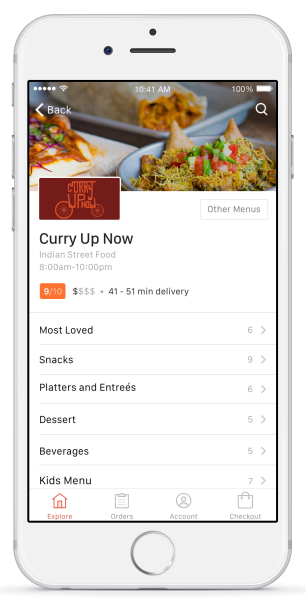 In another sign of confidence, company CEO Tony Xu says the company is cash-flow positive in its Bay Area delivery operations. DoorDash generally becomes cash-flow positive more quickly in the cities like Palo Alto and Sunnyvale, where it has operated the longest because of economies of scale, he said. It launched more recently in some other Bay Area cities, which are not cash-flow positive, but the success in the earlier cities has pulled the entire region into the black.

The company has now expanded to serve 23 markets, up from just three markets in 2015.

The Delight score is based on two main factors: customer satisfaction with the restaurant’s delivery and the popularity of the restaurant (in other words, frequency of orders). The company maintains the freedom to tweak the algorithm to compensate for things like whether a company is only popular because it’s in a prime location, rather than because of food quality per se.

The Delight score ranks restaurants from 1-10, with ten being the best. It is different from Yelp’s star-rating system by design, according to Xu and DoorDash’s head of design, Josh Abrams, who showed off a beta of the release to VentureBeat earlier this week.

The star rating offered by Yelp reflects verbatim feedback that can be highly subjective: A waiter may simply look at a patron the wrong way, and boom, that customer writes a scathing review of how nasty the place is. Yelp reviews can also be gamed more easily, because anyone can write in and post a review. By contrast, DoorDash has more control over the two main inputs of the rating and rates the restaurants based on what it says are much more “objective” factors. Frequency of orders is a fact and so can’t be gamed easily. And while DoorDash’s customers’ provide feedback on a 1-5 scale, that score can be tracked to real user accounts, and DoorDash can verify much of the feedback itself by asking follow-up questions.

Take lateness, a good example. DoorDash quotes the user an estimated time of arrival when they check out, based on a restaurant’s own expected preparation time. DoorDash knows when a driver arrives at a restaurant, when they leave the restaurant, and when they’ve dropped off the item, thanks to GPS. Drivers check in every step of the way on their app, so DoorDash knows objectively how early or late the order is, and can rank a restaurant more positively if it is consistent with its timing.

DoorDash has invested a lot into its back-end infrastructure, and says the rankings flow from two years of logistics data and millions of deliveries – which gives the company a good idea of how a restaurant performs over time. 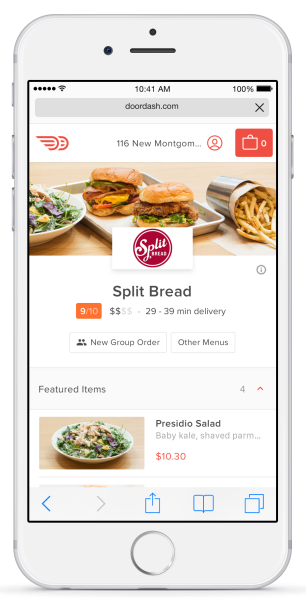 Until today, DoorDash had listed restaurants in a region alphabetically, with no quality ranking. That made it difficult for customers to know where to start. By ranking restaurants, DoorDash now gives order to the madness. You can use the Delight scores as your filter, or you can also filter by speed of delivery, or by price.

The company calls the Delight score an “industry first” because no other company has ranked restaurants by how they perform from the moment an order is taken to the time it is delivered to the home.

Another thing that affects the score is when a restaurant forgets items or adds incorrect items. So if the user asks for a side of dressing or requests no corn on their salad and that doesn’t happen, they can let DoorDash know in the feedback. DoorDash tracks this information to see how often it happens at a given restaurant and whether such mistakes are more common with specific menu items.

I’ve been trying out the service, in San Francisco and in Fremont, California, and I like its efficiency. However, while the Delight scores help me select from the heap, I do feel like I want more data about what really lies behind a company’s score of “8” or “9.” On Yelp, at least, I can scroll through the reviews and quickly gather a picture of why a place only has 3.5 stars — and then decide for myself whether I’ll risk it.

DoorDash isn’t surfacing that lower-level data yet, but Xu says it might later, if customers ask for it. He said it’s also possible that different customers have different criteria for what constitutes a good experience, and so the same restaurant will receive a different score depending on which customer is reviewing its profile. That kind of personalization is something that Yelp can’t do.

The company also has revamped its mobile Web experience after noticing that customers wanted to order on the mobile Web more than they wanted to download DoorDash’s apps.

The company today has also added photos to showcase the dishes on restaurant menus.

The company wrote about its new features and design in a blog post this morning.

DoorDash said it has been sharing the data behind its Delight scores with its restaurant partners for some time, so they won’t be surprised when those results are made public today. Xu says he thinks low scores will be helpful to restaurants by prodding them into providing better service.

The company has raised at least $186.7 million in less than three years of operation.