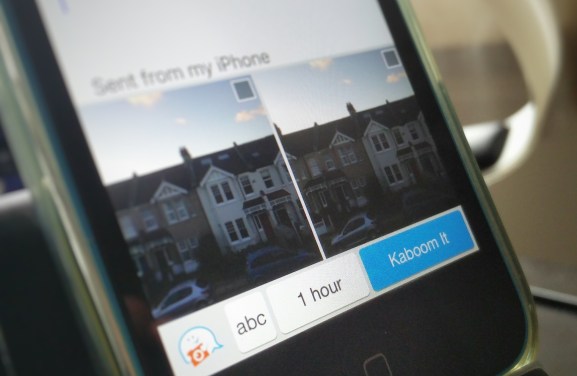 AnchorFree is the latest company to follow the keyboard app trend, with an update to its Kaboom app for iOS.

The popular VPN app provider is famous for Hotspot Shield — which has garnered around 400 million downloads — and already has a number of separate apps, including Kaboom, which launched as an ephemeral messaging app last July. But from today, AnchorFree is adding some keyboard smarts of the iPhone and iPad version.

To recap, Kaboom lets you send messages (photo or text) that self-destruct after a set period of time or a certain number of views, and anyone can access the message via a secure HTTPS browser link — they don’t need to have Kaboom installed. This means it can be shared by email, SMS, WhatsApp, Facebook, Twitter, wherever. But by turning Kaboom into a keyboard, the company is pushing the app front and center, making it accessible at all times.

To set Kaboom as your default keyboard, follow the same process as you would with other keyboard apps — head into your settings, add new keyboard, and activate “Allow Full Access.” Then you’ll be able to switch to Kaboom at any point. It’s worth noting here that Kaboom for iOS isn’t a fully fledged QWERTY keyboard — you still use your normal keyboard for typing, but you can switch to Kaboom whenever you wish to send a self-destructing message. Hit “Kaboom It,” and a link is created to the content. 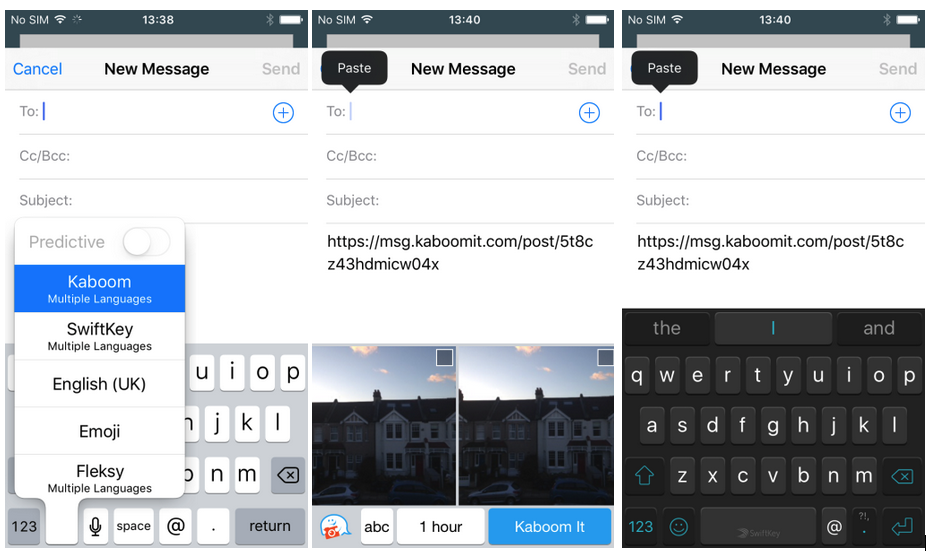 Above: AnchorFree: Kaboom for iOS

Founded in 2005, AnchorFree has nabbed more than $60 million in funding over the past decade, including a $52 million round back in 2012. This isn’t the company’s first standalone app on iOS — it also offers a privacy-focused YouTube browsing app, called Access Tube, and another one called Picaboo, for photo-sharing.

While third-party keyboard apps have been popular on Android for years, Apple only opened up iOS to full system-wide keyboards fairly recently, and this has led to a veritable explosion of keyboards on the App Store, from GIF-centric incarnations to those that focus on simple productivity. But other big tech firms have started to embrace the trend too — Microsoft has been going all-in on mobile keyboards of late, having launched a new mobile keyboard app for Android. This followed news that it was working on a new Word Flow keyboard for iOS devices. And last month, Microsoft acquired perhaps the best-known keyboard app of them all – SwiftKey.

Meanwhile, Google is also rumored to be working on an iOS keyboard app.

So what is all the fuss about keyboard apps? Well, the core underlying reason is that they are usually the single most-used app on a mobile phone because they’re used across all other apps, from searching Netflix and tapping out an email to WhatsApping and texting. This not only lets companies gather data in some cases, but it can serve as a launchpad for related services such as Internet search, in Google’s case, or the phone’s camera. In the case of AnchorFree, it’s more about expanding the app’s privacy credentials into new areas and making its existing messaging service more easily accessible.

A spokesperson told VentureBeat that Kaboom is more of a proof-of-concept product for now — there are no direct monetization plans as of yet. Or, at least, none that could be shared publicly. But it does open opportunities for “bundling” in the future. If, for example, Kaboom takes off into the stratosphere, it could become a feature of the main Hotspot Shield app. This is similar to the practices of other companies, including Facebook and Instagram, which frequently launch standalone apps to test out new features, rather than tampering with their flagship products.