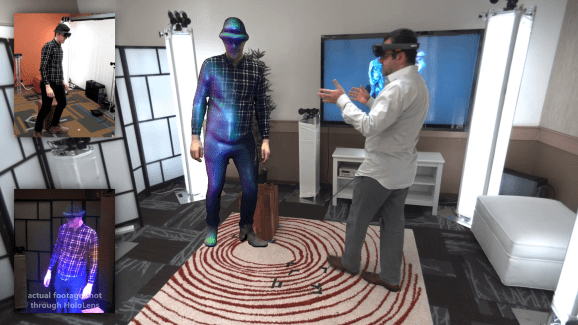 You can do a lot of impressive things with HoloLens, Microsoft’s augmented reality (AR) headset. But there’s a new thing Microsoft Research’s Interactive 3D Technologies (I3D) team has developed with the HoloLens, and, uh, it’s crazy.

A YouTube video posted yesterday shows people in two difference places teleporting into the same room using HoloLens and interacting with each other. Later, the video shows a person playing back the recorded footage that includes him, and even miniaturizing the footage — just like in “Minority Report.”

This “holoportation” goes beyond Hooli CEO Gavin Belson’s “telehuman” telepresence concept, featured in the comedy show “Silicon Valley” — because holographic representations can walk around the room, thanks to cameras recording footage from many angles.

This isn’t really something you could pull off with a virtual reality (VR) headset like the Oculus Rift or the HTC Vive, because you can’t see the room around you. On top of that, the 3D hologram appears as an overlay. This is the type of thing that makes you think the HoloLens — and other AR devices — is worth checking out.

The HoloLens Development Edition started shipping last month for $3,000 each.