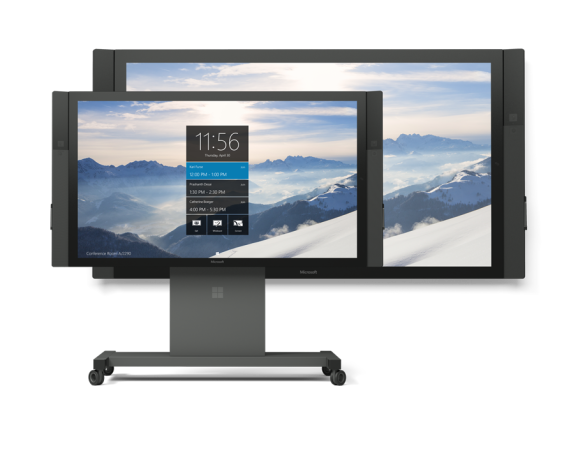 The Surface Hub, Microsoft’s large touch-enabled display that runs Windows 10, is not designed for consumers. It’s made, really, for businesses.

That said, I had fun using it for a few minutes yesterday, when Microsoft executives gave me the opportunity to see it up close, now that the devices have started shipping.

There’s a special stylus (and keyboard) for the device, and anything you draw on the Surface Hub with it, or with your finger, shows up onscreen immediately. It’s sort of like the Apple Pencil’s performance on the iPad Pro, except the display is much bigger and more impressive.

When you walk up to the device, you see a home screen with three options: Connect, which lets you display content from another device using Miracast; Whiteboard, which is based on Microsoft’s OneNote note-taking app; and Skype for Business. You can use two of these at once onscreen, and because of the screen size, it’s impressive.

This is a Windows 10 device, so you can run universal Windows apps on top of it. And it comes with standard Windows 10 apps, like Edge, Maps, Photos, and Word. But because this is meant for businesses and supports many users, the Windows Store is not quickly accessible, and you can’t sideload apps on it. Only admins can go into Settings after logging in and installing apps in the Windows Store.

Note to third-party developers: This design choice means that you can’t have your app run natively on the Surface Hub unless you have a universal Windows app. The exception here is that you can use the Connect app to share your screen from another device.

When you’re using the Surface Hub, you’ll probably be standing. And as you’re standing, you probably won’t be able to type on the physical keyboard. So you’ll have to resort to the virtual keyboard onscreen. You can move it around the big display and tap, tap, tap with a finger or the stylus. You can’t resize the keyboard, unfortunately.

And you can’t use your voice, either. Cortana, Microsoft’s personal digital assistant that ships with Windows 10, just isn’t here. That was a conscious decision on Microsoft’s part. Executives had concerns because Cortana ordinarily knows a lot about a given user, which isn’t ideal for a device that many people share. Still, voice input is a natural fit in more and more scenarios, and it would certainly be useful for situations where a physical keyboard isn’t convenient. So it’d be nice to see the Surface Hub get support for some parts of Cortana, or at the very least, dictation.

The Surface Hub comes with two styluses, and two people can can work at the same time and even draw with different colors in the palette in apps like the Whiteboard. The palette is missing a few colors in comparison to what’s available in OneNote on desktop or mobile, but you’ve got enough colors to take quick notes. And the canvas is infinite, which is nice, although you can’t zoom in infinitely.

Skype for Business works pretty well on the Surface Hub. Just as you’d expect, you can make voice and video calls and chat with many other users at once. A video call I was part of had hardly any lag. When we shared the screen with the person we called, the person on the other end saw our drawings almost immediately. But while the Full High Definition cameras on either side of the display record what you’re doing, there’s no camera in the middle. So it’s not easy to simultaneously look at the camera and look at something onscreen.

The Surface Hub’s stubby, marker-like stylus won’t work on Surface tablets, and the slim Surface Pen doesn’t work on the Surface Hub. The Surface Hub’s inking and display technology is simply different, Tim Bakke, senior product marketing manager for Microsoft devices, told me. That may be true, and Microsoft presumably made this decision because it wants people to have the best experience with this premium hardware, but it means the device is not as interoperable as it could be.

Overall, though, the $22,000 84-inch Surface Hub I tried out looked impressive and felt very responsive. You might not have one at home, but you might very well start seeing them in corporate offices. And if you get a chance, you should play with one. You’ll probably like it.