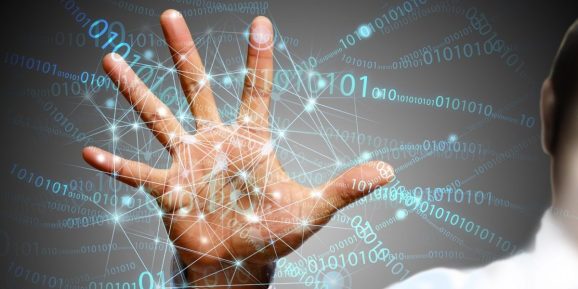 In the future, instead of carrying around your favorite technology like you do with your smartphone, your must-have technology may be glued to you. Before pulling on your jeans each morning, you would apply its silicone layers directly to your skin. Its functions would surround your body, a smartphone diffused into an electronic aura.

Powered by your body heat, solar panels, or an electromagnetic charger, it would capture information both about you and everything around you. It would not just know your heart rate, where you are, and which direction you’re walking, but also the outside temperature, what activities you’re performing, and the weight of your gym bag on your shoulder. At work, if you’re slouching at the computer, it might give you a gentle reminder to sit up straight. Even more than smartphones have, this Internet “skin” will erode the boundary between human and machine, merging your body with your computer. And it will do all of this thanks to incredibly advanced sensor technology.

There’s just one thing holding it back: that same sensor technology.

Often technology gurus treat this hyper-connected future world as an inevitability. Cisco CEO Chuck Robbins told ITworld that the number of devices connected to the Internet of Things (IoT) will rise from 50 billion to 500 billion in a decade. But Robbins and others ignore that most sensors aren’t yet good enough, tiny enough, or cheap enough to make it a reality. And it might be a while before they are.

It’s easy to see why people think sensors will always get cheaper. The price of sensors has dropped 200 times over the last two decades. Some sensors are one-tenth the price they were just four years ago, despite having vastly improved their function. Take accelerometers, for example. They used to be the size of your thumb and cost $25. Now they’re a millimeter square, cost 10 cents, and perform better than the thumb-sized version. The 10-cent compass in your smartphone is navigation-grade, meaning it is about as good as the compass in an airplane cockpit.

But a lot of sensors are still expensive, and many of them don’t perform as well as they should. The gyroscope in your phone is far from navigation-grade; it’s worthy more of a Toyota Corolla than an airplane. And it costs 90 cents, not 10 — a big difference in mass-production terms. Medical sensors are also in their infancy. Sure, you can measure heartbeat with a FitBit on your wrist. But someday medical sensors will be durable enough to be swallowed so they can monitor life signs from within your intestinal tract.

And that’s just two sensors. There are hundreds of different sensors whose prices needs to drop to 10 cents for the wearable Internet to reach its full potential.

Why is it hard to make cheaper and smaller sensors?

Sensors are unlike other smartphone components: You can’t just outsource manufacturing to another country to make them cheaper. Sensors only get cheaper through technological innovation. For example, most sensors are measuring something analog, like the temperature or pressure, that then must be converted into a digital signal that can be shared with the IoT. How that analog-to-digital converter is designed can significantly lower cost and save board space. These advances are made by highly paid product engineers — engineers with their masters or PhD, and they don’t come cheap.

On top of that, the sensor sector is very diversified: every one uses different technology. There are chemical sensors, physical sensors, medical sensors, and each one can take a decades to work on. Some sensors can take as long as 20 years to reach volume production. Their great technical complexity makes their development cycle much longer than other sectors of the tech industry.

These are problems that need to be solved before we’ll reach the full potential of the wearable Internet, and they’re problems that will take a while. But one thing is clear: Designing new things to do with smartwatches is all well and good, but for the real wave of the future, keep your eye on the sensor.

Yang Zhao is the President and CEO of MEMSIC, a MEMS sensor company and has been named as an inventor on 22 U.S. patents. He is currently the vice chairman of the board at the School of Engineering at Peking University.