Kik is joining the mobile messaging revolution with a new marketplace featuring bots that are “entertaining, playful, and useful.” The company has launched with 16 different bots, including those from Funny or Die, J-14, Riffsy, Sephora, Vine, and The Weather Channel. It has also partnered with Imperson, Massively, and Sequel to entice developers to build on its platform.

With 275 million registered users, Kik believes that its particular demographics will attract brands wanting to get into the bot game. The company says that 40 percent of U.S. teens use the app, which could certainly be appealing to the right brands. Mike Roberts, head of messaging and bot experience, told VentureBeat that this new technology is in a better position to broadcast branded content to users. In the mobile space, as he sees it, messaging is the new browser and bots are the new website.

eMarketer estimated that 1.4 billion people used a chat app last year. But Kik has entered into an increasingly crowded marketplace, joining the likes of Facebook, Slack, Microsoft, and Skype. Roberts believes that his company can stand out by building a better experience. He observed that the industry at large wants to build bot platforms, but everyone is still trying to figure out how to develop them properly. So although the industry is looking for a narrative, Kik has decided to shy away from that and instead focus on execution.

Roberts said Kik has an additional advantage because of its audience: “Developers looking for a mobile-first audience that understands the importance of bots and a conversational interface will find that on Kik.”

Although the company’s sticking with three categories for now, that’s only temporary. Roberts declined to specify which might be added in future; he said that it’ll depend on the bot shop’s growth and what developers are building. 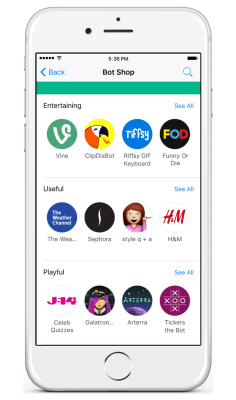 “The widespread distribution and usage of messaging platforms have created immense potential for bots,” said Eyal Pfeifel, cofounder and chief technology officer for Imperson. “Bots will assume many different roles, as diverse as the publishers that create them. Use cases range from entertainment, marketing and promotions, e-commerce, travel, news, personal assistants, and customer service agents, all the way to virtual friends and companions.”

Kik has also released new chat bot features for developers. The first is called Web Bubbles and enables sharing of rich media content within conversation threads like Google Cards. Mentions is a feature that allows bots to participate in conversations involving multiple parties simply by @mentioning them. Lastly, Suggested Responses offers a nudge when confronted with a text input — it answers the question “What do you want to do?”

Kik’s bot shop is now open to all, and developers interested in submitting their work to the company can go to dev.kik.com.