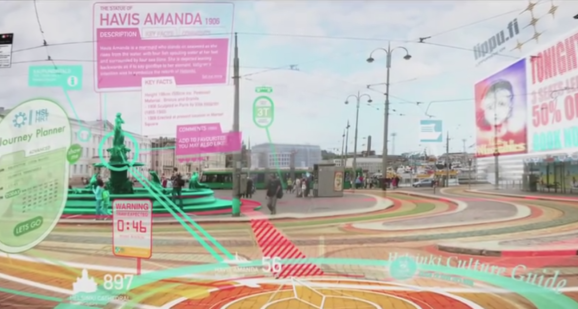 A still-shot from the 2014 Dezeen YouTube video "The Future of Augmented Reality".

Over the last few months, Goldman Sachs, Digi-Capital, and ABI Research. have all released projections for the augmented reality and virtual reality market. The projections range from the Goldman Sachs low end of $80 billion to the Digi-Capital high end of $120 billion.

I tend to agree with Digi-Capital — the high-end projection. As objective as I can be in this matter (as CEO of an augmented reality company), I think most analysts aren’t seeing the forest for the trees with respect to all the different areas that augmented reality and virtual reality will impact.

Let’s take retail as an example, since that’s the area I’m closest to. Goldman Sachs projects a best case scenario of a $1.6 billion market for augmented reality and virtual reality software for retail by 2025. In comparison, a chart Digi-Capital released appears to project that the market for augmented reality commerce alone will reach between $10 and $20 billion by 2020. The reason I agree with Digi-Capital’s projection is that there are many, many areas where augmented reality (and to a lesser extent virtual reality) will impact the retail purchase funnel.

For those not familiar with the retail purchase funnel, it includes steps in a process that eventually lead to a sale. These steps include product discovery/awareness, consideration, trial, decision, purchase, and retention. Augmented Reality will impact each of those steps to varying degrees, and here’s a sampling of four key areas that I think the low-end Goldman Sachs projection overlooks:

1. Product discovery and drive to retail — Augmented reality used on mobile devices will help expose potential shoppers to virtual retail items. While also leveraging geolocation, you can activate AR content in a geofenced area and geofence those areas specific to a store (driving people in-store in the process). For example, a retailer or brand could have a virtual pop-up shop display in an augmented view in a certain location relative to the mobile shopper. The shopper could purchase items directly through their mobile device, or the items’ physical counterparts could be waiting in-store for the shopper.

2. Virtual product trial and personalization — Virtual dressing room technology will be a key area here, where mobile-to-display synchronization turns a display into a personal shopping assistant for a shopper. An example here would be using beacon-enabled tablets or smartphones to tag physical items you want to try on virtually using a display. You can then purchase directly from the display or through your mobile device.

3. Advanced biometric and AR content data — This is one area analysts are grossly underestimating or overlooking when it comes to augmented reality in retail. Kinect and other 3D cameras can capture biometric data and physical attributes of a shopper such as skin tone, hair color, and body shape. This data can then be used twofold. Shoppers can use it to get personalized recommendations based on how they react to a certain item or receive recommended items based on similar physical characteristics. And retailers can use it to get real-time feedback on products based on biometric data. Over the last few years, interactive vending machines have been one popular method that brands such as Coca Cola can use to recognize a shopper’s motion or emotion in order to dispense a product. MIT researchers have also been working on detecting pulse rate through a camera that could allow brands to assess a shopper’s biometric response when viewing a retail product.

4. AR object and shopper persona profile — Retailers can combine the previous two capabilities I’ve listed — virtual product trials and personalization and biometric and AR content data — to offer a more advanced AR-based social shopping experience. Friends can connect from anywhere to virtually shop together and have personalized recommendations. Retailers can also further enhance the augmented reality e-commerce experience with stylists who connect with shoppers and view or suggest virtual items in real time.

Those are just four specific areas of the retail purchase funnel that pertain mostly to apparel and accessories. There are other retail areas you could dive deeper into, such as using AR for placement of retail display stands or even using mobile augmented reality with 3D cameras to plan and purchase items in a grocery store.

Some of these areas are closer than others to retail adoption, but by 2020-2025, it would be a shock not to see all of these augmented reality areas fundamentally changing the retail shopping experience.

Matthew Szymczyk is CEO of Zugara.