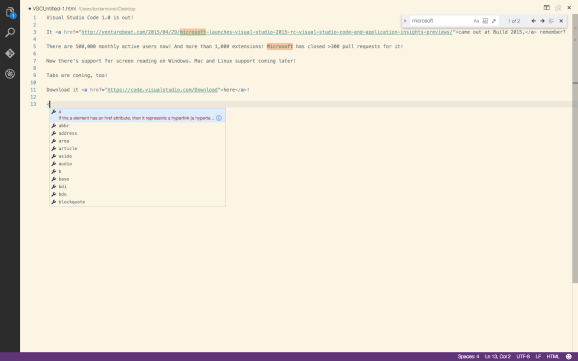 Microsoft today is announcing the release of version 1.0 of its open-source Visual Studio Code editor. The cross-platform application now has more than 500,000 monthly active users, after launching last year.

More than 1,000 extensions have become available for Visual Studio Code since Microsoft introduced extensibility in November, when it became available on GitHub under an open-source MIT license. The community has closed more than 300 pull requests with an eye toward improving the software.

“We feel like we have a good, stable ecosystem that lets us kind of declare GA [general availability],” Microsoft Visual Studio engineering leader Shanku Niyogi told VentureBeat in an interview. In reality, the new features have been available to people participating in the Insiders Program for weeks, but now the beta sticker is going away.

But this is Microsoft we’re talking about, and Microsoft has provided the Visual Studio integrated development environment (IDE) to developers in a business setting for nearly 20 years. So the company is keen to make sure it’s ready for serious business use. Microsoft has added features that make it easier for entire development teams to adopt — although that’s not to say it wasn’t sufficiently powerful when it came out in the first place, with features like native Git integration and a debugger.

Version 1.0 includes localized versions of the editor in nine languages other than English: simplified Chinese, traditional Chinese, French, German, Italian, Japanese, Korean, Russian, and Spanish, according to a blog post.

Today’s release also comes with numerous accessibility improvements, based on input from visually impaired people. These features are available through screen readers Windows now, and the plan is to bring them to OS X and Windows later.

There’s also a little widget now in the bottom left corner that provides status updates and options for extensions. And you can select text in many columns and edit them all at the same time, too.

The ability to have multiple tabs of files running at once in the editor will come in a future update, Niyogi said.