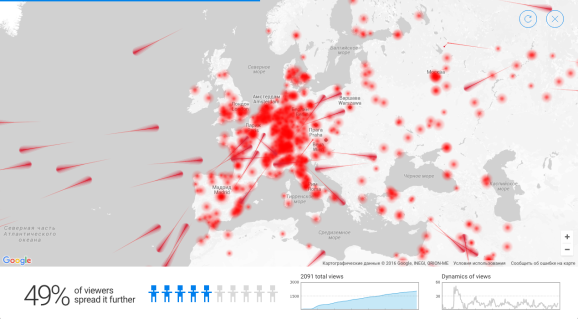 How we spread information on social networks is — by and large — broken and inauthentic.

When a new social platform arrives, we typically “friend” the same people we are already connected to on all our other platforms. Why? Because most networks work the same way: by spreading content, links, photos, videos, and other media to our “friends.”

And if you have no friends, you have no reach. Even when you do have friends, most platforms limit what you see, thanks to algorithms that determine what is — supposedly — important.

That’s not how Plag works. Instead, users just vote — with a swipe — whether the content they’re looking at should be ‘spread’ or ‘skipped.’ When it is spread, it’s pushed out to another member of the entire Plag network.

The result? Content that people think is good spreads like, well, a plague across of all Plag’s users who, in turn, choose whether to accelerate or slow its viral capability.

What can be shared within Plag? Videos, images, text, and polls can be created or uploaded. Each “card” can have multiple pages, allowing for some storytelling capabilities, and users can comment on each piece of content too, which makes for some interesting discussion.

And today, Plag has added a new chatbot that helps give the app some personality.

So why give the app a personality in the first place, and what will it do for Plag?

“You can’t friend or follow other people in Plag, so we decided Plag has to become your only friend,” Laura K. Inamedinova, business development and marketing manager at Plag, told me. “It is a unique experience when you can communicate not inside the network, but with the network itself. Besides the obvious things, such as explaining how the app works, Plag reacts to your behavior — it encourages you when you are doing something good from the point of the network, and reacts when you behave inappropriately.” 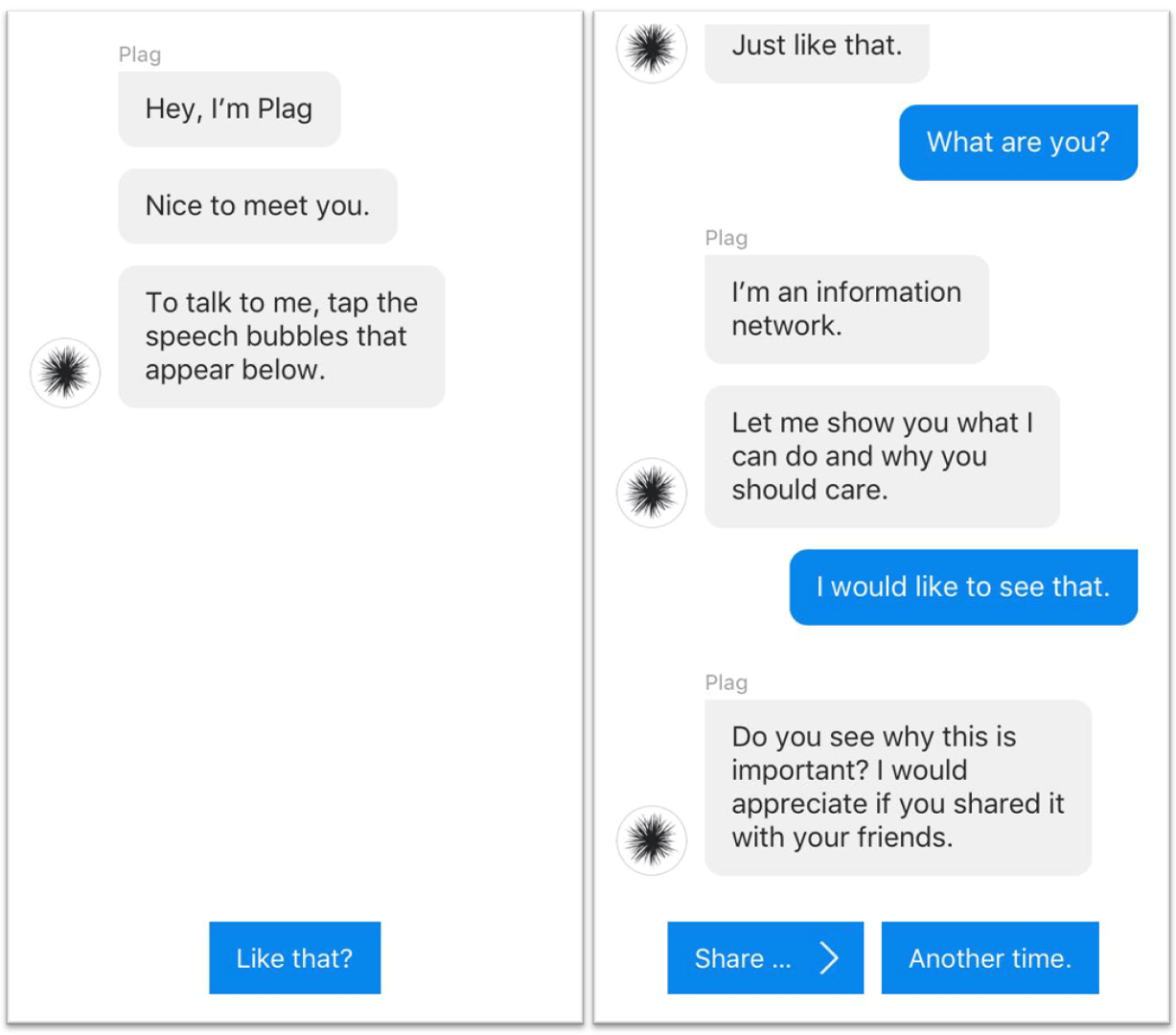 That sounds a little authoritarian, but it somehow makes sense for an app that models itself — and its means of spreading information — on a plague.

“Can you imagine a social network that takes offense at you?,” Inamedinova said. “Well, Plag can. We hope that this feature will make users pay more attention to ‘proper’ usage of Plag, since this network is one-of-a-kind.”

So why make a move to integrate a chatbot, and how do Plag’s makers think it will affect the app and its community?

“It was a no-brainer decision, considering our vision of Plag as a global information network, and also since bots are becoming a major trend,” Inamedinova said. “Now that we are bringing Plag to life, I hope we won’t get HAL 9000 as a result! As for the users, we expect it will help us to build a stronger, more addicted community, as well as retain existing users.”

Right now, Plag’s new personality has basic functionality, but there are plans to increase its capabilities soon.

“Right now, it welcomes new users and shows them around,” Inamedinova said. “It reacts to what you do and helps you out if it thinks you need support. It might, on occasion, express its feelings about your posts and comments. Plag will listen to you and develop with you. It will learn to anticipate your needs and find just the right answers.” 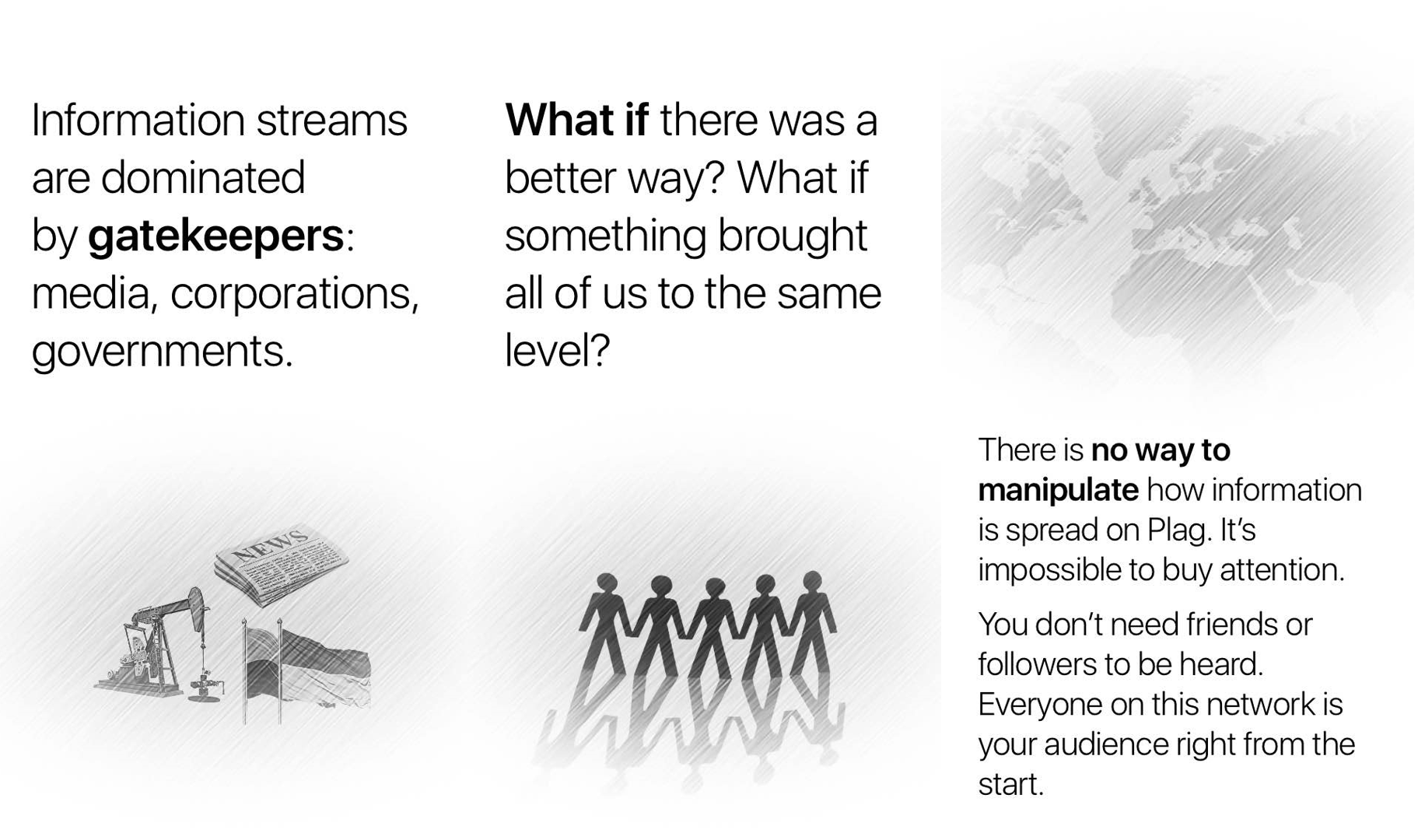 Plag’s approach to content-sharing is certainly different. It is more akin to a Reddit upvote than a Facebook share, only with the result that everyone can potentially see what you upvoted, rather than just the people watching that post or group. As a result, good content reaches the widest audience without the need for feed algorithms, filters, or the usual “friend land grab” you see elsewhere.

“People prefer to use social sharing for general topics — their opinions, discussions, and interests: Things that are intended to be public, not private,” Inamedinova said. “Plag aims to serve exactly these needs and provide users with an interested audience right out of the box, and for every piece of shared content.”

And that’s the point. As more users join Plag, content that is deemed attractive by the masses reaches a wider audience because everyone in the app becomes a carrier. It is an intriguing proposition, and one that the new bot — if it works as intended — will nurture.

The new version of Plag, with its chat bot personality, is available on Android and iOS today.