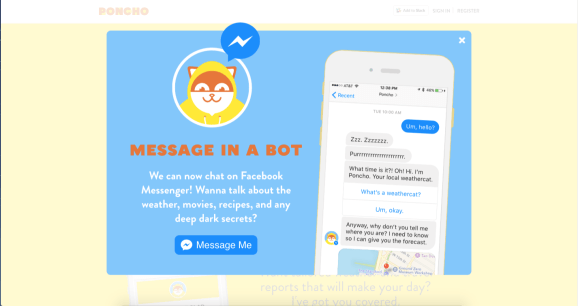 Fresh off its promotion at Facebook’s F8 developer conference, Poncho announced today that it has raised $2 million for its personalized weather forecasting service. The round was led by Lerer Hippeau Ventures and will be earmarked for improvements to Poncho’s natural language processing, in addition to building artificial intelligence and data science technology into its bots and apps. 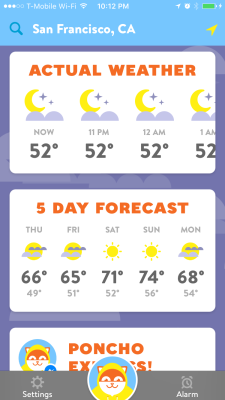 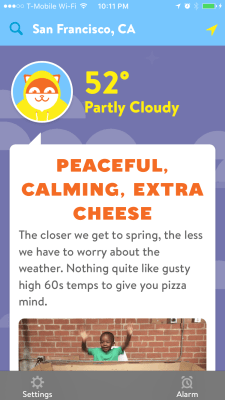 Started two years ago out of Betaworks, Poncho offers a weather forecast alternative to Yahoo Weather, AccuWeather, and The Weather Channel. The company seeks to dominate what CEO Sam Mandel calls “thin content,” which is activity that “takes place within the notification layer and also on a messaging platform that’s contextually relevant, customized, and comes at the right time, but with enough polish to be engaging and cause a happy emotion.”

The service originally pushed weather forecasts through text messages, but Mandel’s team realized that people wanted to text Poncho back. It evolved to email before coming to iOS and finally being available through apps like Facebook Messenger. We’re told that in May, Poncho will be available for Android and that the company will expand out into other messaging platforms in the future.

Poncho intends to use its latest infusion of capital to improve its product, making it stand out in terms of content, voice, science, and technology. Mandel believes that the “arms race is just starting,” so his company will be working to accelerate development of its apps and bots. This includes building out the AI for its chatbots along with the data science capability to “better understand large volumes of messages and media type from users,” such as audio files, images, and more.

And although the app does tell you what the weather is, Poncho thinks its millennial spin differentiates it from competitors. Instead of just the forecast, it utilizes popular culture references to music and movies. Through its apps, the service delivers relevant, small pieces of content when you need them. The company thinks that it’s Poncho’s voice, character, and emotional connection that keeps users loyal.

“We think there’s an evolution of the way … content is delivered,” Mandel told VentureBeat. “Weather is a natural form of content to deliver. On the app front, the notification capabilities in the app are what people will build their lives around. We’re grateful for the attention and happy to be in the chatbot space, but we’ve had a strategy since we started to build ‘thin content’.”

Mandel admitted that Poncho’s seed round was oversubscribed, but said that it was “the appropriate amount to raise at this point.” He declined to disclose the company’s valuation.