Until 2012, there had been no significant changes within the automobile industry for 15 years. But 2012 marked an inflection point from which myriad innovative opportunities emerged. Tesla showed us the power of a truly connected car with API’s that could remotely access a vehicle’s data and fix issues with over-the-air updates. Self-driving cars also became a tangible reality, with Google and Delphi demonstrating prototypes across America. Since then, in just a four-year period, the connected car market has transformed significantly. As of early 2016, the more active sectors with the most companies have been in ride hailing, aftermarket plug-in OBD-II dongle devices (on-board diagnostics refers to a vehicle’s self-diagnostic and reporting capability), and car rental/sharing.

The VB Profiles Connected Car Landscape maps companies and tracks innovation across the entire industry. It covers mobility technology from consumer apps and services to enterprise providers to big data to the Internet of Things (IoT). Both nascent firms and legacy companies are moving into this market with new business models. We will be updating the Landscape frequently with new entrants and keeping tabs on key trends. 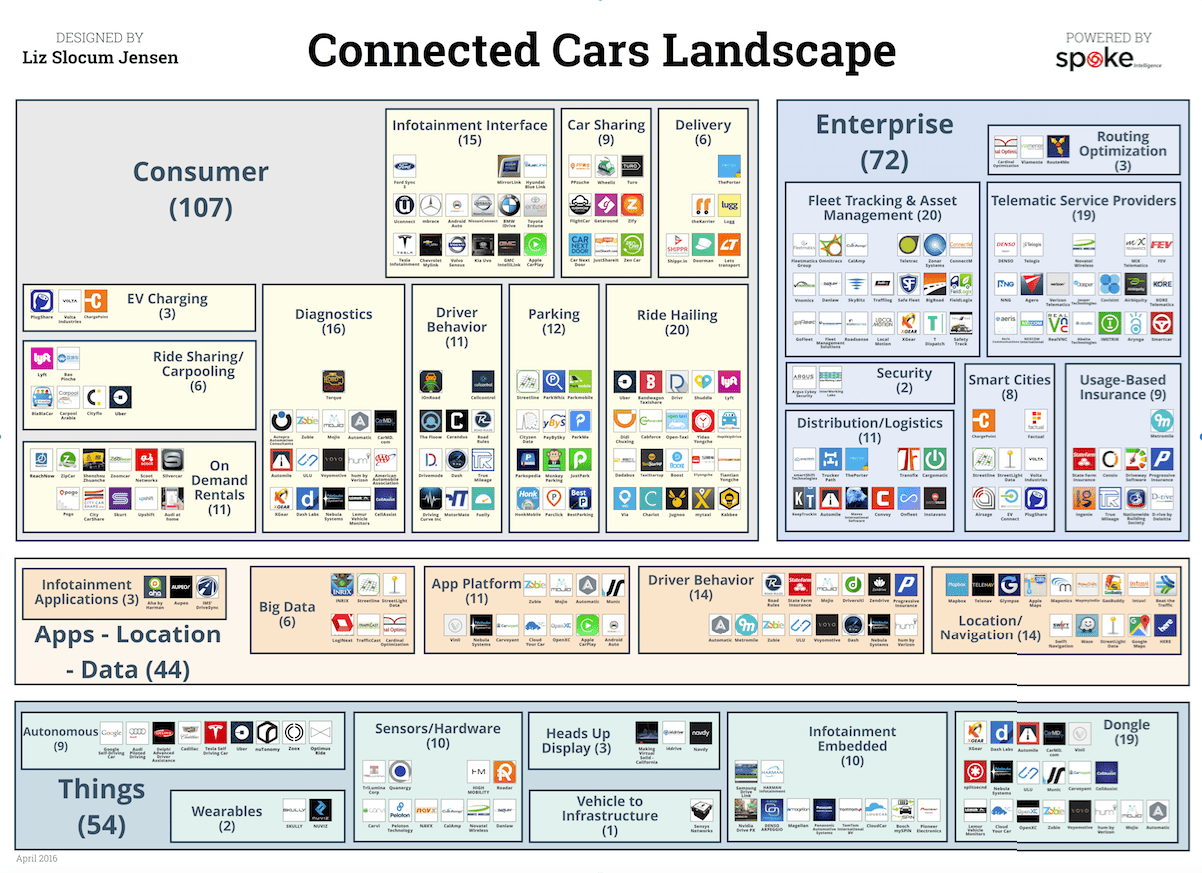 A high-resolution version of the VB Profiles Connected Cars Landscape is available for download here.

Beginning in 2012, on-demand, two-sided markets became one of the biggest trends in transportation and everyone’s favorite business model to emulate. Uber and Lyft inspired many niche copycats, such as HopSkipDrive, Shuddle (both rides for kids), and Wheeliz (wheelchair accessible peer-to-peer car rentals). T Dispatch even built an SaaS fleet management platform that can get a ride-hailing fleet up and running quickly.

However, since late December 2015, there has been a palpable shift in on-demand ride hailing, as services enter and exit the market at a consistent rate. Recently, Sidecar got acquired by GM, and Shuddle shut down its operations. Collectively, they had raised over $47 million dollars. This amount could not compete with the $8.3 billion and $2 billion in funding that Uber and Lyft have raised, respectively. Even though Sidecar was a pioneer when ride sharing was still an uncontested market, in the end it was out-maneuvered and out-financed.

Some are calling Uber the winner, especially in the U.S. This may appear to be the case in 2016. After all, when comparing Lyft and Uber, the consumer experiences feel identical, especially since many drivers work under both apps. But as the two companies simultaneously move into commuter carpooling, the types of customers who favor one brand over another might make the services somewhat distinguishable again. Outside of the U.S., Uber’s major Chinese competitor is Didi Chuxing, which has raised $5.3 billion and has partnered with Lyft, Southeast Asia’s Grab, and India’s Ola.

For the past few years, the ride-hailing space has kept us engaged with news about fierce competition, multi-billion dollar valuations, worker classification laws, municipality push-back, and strategic partnerships. Will the ride-hailing space ever become uneventful? For now, this sector continues to redefine itself frequently, as the dominant players work to find new markets and create strategic global partnerships, and the clones demonstrate whether their niche markets can create enough value.

Meanwhile, India is seeing growth in the last-mile delivery industry with The Porter, Blowhorn, and Let’sTransport. These on-demand services help people move anything anywhere. Considering that India has the highly efficient yet low-tech dabbawallah lunchbox system, I look forward to seeing how they can innovate logistics with a high-tech approach and whether these companies can find sufficient sustainability.

The OBD-II dongle area has become increasingly crowded with firms offering a developer platform for connected car apps. The big consumer players in the market include Automatic, Mojio, Dash, and Vinli. Existing standalone dongle-based apps include pay-as-you-drive insurance company Metromile and such fleet management companies as Automile. With so many developer’s tools, can we expect to see a barrage of connected cars apps in the near future? Most of these dongle platforms seed their marketplaces with similar apps, like fuel-efficiency calculators and trip logs. What other apps could we see by leveraging car data and integrating the car into the Internet of Things? Perhaps that most profound innovations around connected-car big data won’t be consumer-facing, but will focus on the enterprise side instead. Remote monitoring of the operations and status of vehicles will be relevant if we see a significant shift of car ownership from individuals to car-sharing or fleet management.

The end of car ownership?

Car ownership is radically changing. Even though it won’t go away completely, especially in rural areas where car owners use their vehicles daily, we already have a world in which not owning a car is finally an option for people in most high-density cities. Turo (formerly RelayRides), Getaround, and PPZuche enable peer-to-peer car rentals so that users can try all types of cars and owners can make money with their autos.

In San Francisco, Scoot’s electric rental scooters operate throughout the city and have expanded their riding range to 25 miles. Scoot also offers Renault’s Twizy (think urban golfcart), making a great use case for car makers and startups working together. At first, the Twizy was a concept car that Renault didn’t think could be viable in America. Scoot, however, in trying to recreate the European scooter culture in San Francisco, found the perfect American application.

At the airport, the rental car experience is getting less painful thanks to services from startups like Silvercar and Flightcar, who offer high-touch service, efficiency, and transparency of experience, along with high-end cars.

It is notable that the innovation in short-time car rentals has come from smaller companies like City Car Share and Zipcar, while it took very long for bigger companies — like Enterprise, Audi at Home, and BMW Now — to enter the space. These giants are now even using the term “sharing,” though when one entity owns the entire fleet, it’s rightly called “renting.”

The promise of autonomous vehicles

No overview of connected cars would be complete without mentioning self-driving cars. Mapping and vehicle-to-vehicle communication will play significant roles in progressing transportation toward full autonomy.

Quanergy is changing the LiDAR (Light Detection and Ranging) market with their low-cost 3D LiDAR sensors. The main issues with previous LiDAR systems was that they were very expensive (from $8000 to $80,0000) and that they had constantly moving parts.  In early 2016, Quanergy announced a $250 solid-state LiDAR, which will make it easier and cheaper for robots of all kinds to sense what’s going on in the world around them.

GM recently acquired Cruise Automation, which developed an aftermarket kit that converts Audi A4 and S4s into self-driving cars and which was one of only thirteen approved participants in the California DMV’s Autonomous Vehicle Tester Program. GM isn’t wasting time with their new technology. They recently announced that they are partnering with Lyft to offer autonomous electric ride hailing by 2017. Meanwhile, Peloton is using radar and Dedicated Short Range Communications (DSRC) to coordinate truck platoons that closely follow each other on the road. This automation technology creates fuel, safety, and logistical efficiencies in the transport sector.

To keep up with all of this innovation, maps will need to be more detailed and updated more often than is currently the case. Expect more comprehensive data collection, about things such as road markers and parking spaces, from companies like HERE.

Stanford Revs Institute for Automotive Research features an autonomous vehicle research section that highlights cars like Shelley, an Audi TTS Coupe that was developed to self-drive at high speeds under extreme conditions; and Marty, a DeLorean modified to test emergency handling scenarios by autonomously drifting. One hot topic in autonomous driving is robotic ethics. Researchers in the Stanford Revs program, in collaboration with philosophers, have done several field tests that are similar to Isaac Asimov’s Three Laws of Robotics. The car’s actions can vary depending on whether its algorithm is weighted to favor of observing traffic laws or maximizing safety.

When considering where we might encounter autonomous vehicles in our everyday lives, I think we’ll initially see them in the form of truck platoons and in controlled communities that were specifically designed for autonomous driving. For the foreseeable future, connected cars will continue to be the prominent focus for the average consumer (before mass-market autonomous cars).

Despite the many improvements in automotive technology and infotainment, the mobile phone is still a driver’s primary in-vehicle computing device. Our dependence on the phone has created a new, prolific hazard on the road. The Virginia Tech Transportation Institute found that texting while driving raises a driver’s crash risk by 23X. The ultimate solution is fully autonomous cars, but that reality is still too far in the future. We need a solution for now.

In the meantime, neither car makers nor telecom companies have figured out how to prevent drivers from interacting with their phones and keep drivers focused on the road. Cool voice technology and data-rich heads up displays make for stunning product demonstrations, but are still cognitive distractions. I founded Road Rules to automate tasks (such as responding to messages) so that drivers are not compelled to touch their phones when behind the wheel.

Until recently, transportation was dominated by legacy companies. Today, the “connected car” is no longer a buzzword or concept. The market is in full swing, with room for new opportunities, new players, and strategic partnerships with the legacy companies. Now, and over the next five years, we will see:

Liz Slocum Jensen is the Founder and CEO of Road Rules, a company that automates tasks on drivers’ phones to limit driver’s distraction. You can track her 190+ company landscape here.