There’s a lot of compulsive behaviors that people would stop doing if they were only conscious of them. That’s the thinking behind the Liv smart bracelet, a product from a Midwestern startup called HabitAware. Liv monitors your movements and sends you a subtle alert when you may be doing something compulsive, like pulling out your hairs, biting your nails, picking at your skin, or sucking your thumb. A surprising number of kids and adults do it.

Sameer Kumar, cofounder of the Minneapolis-based HabitAware, realized this when his wife, Aneela, told him that she had a condition called trichotillomania, a compulsion to pull out the hairs of her eyebrows and eyelids. It was a repetitive behavior that she lived with all of her life, and she wanted to stop. Sameer Kumar started thinking about a way to help. Together, they came up with Liv, which has built-in motion sensors that can detect movements of your arms. HabitAware is launching preorders today on its website.

The $99 bracelet connects via Bluetooth to an app on your smartphone, where you can log the behavior. Liv also sends a gentle buzz that you can feel on your wrist as a reminder that you may be doing something that is dubbed Body Focused Repetitive Behaviors, or BFRBs.

The background for the invention was deeply personal. 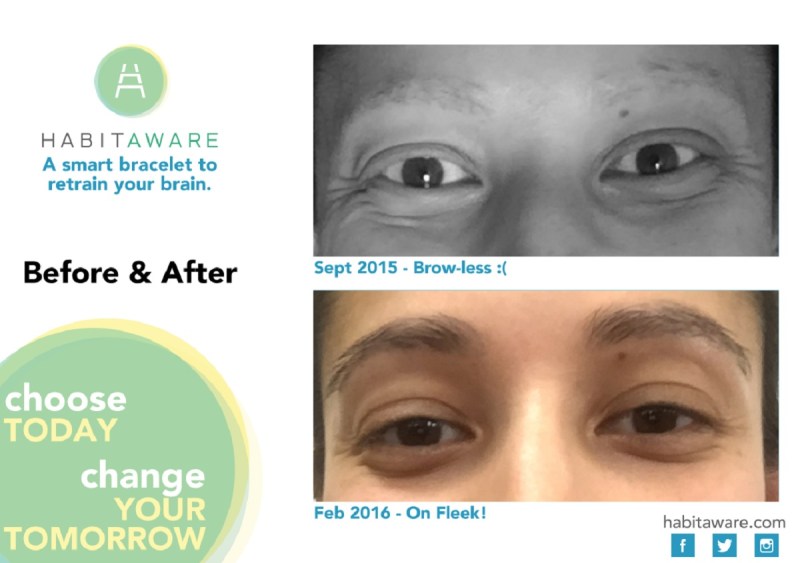 Above: Aneela Kumar, before and after she started using Liv.

“For most of that time, I thought I was the only one who did that,” Aneela Kumar said, in a statement. “Three years into my marriage to Sameer, I finally shared my secret with him, and we set out to solve my trich together. Liv has helped me so much in just a few months and has given my hair time to regrow. I’m convinced it has the power to help others as well.”

Sameer Kumar, a former management consultant, said he had never heard of the condition before. He looked into it and found it was fairly common.

“You can imagine how much stress it is,” he said. “They worry if people are looking at them. There is a cycle of shame and stress. Stress may be causing it, and it can cause more stress. My wife wished she had something that alerted her. She wanted to stop. It was ingrained. It was subconscious. So we started playing with prototypes. We worked nights and weekends for a year. We built it for her.”

When they found they had something that worked, they formed the company. They went to a hackathon in Minnesota, and they won it. Then they joined a hardware accelerator called Hax in China.

HabitAware plans to donate 2 percent of preorder sales during the first 60 days to the TLC Foundation for Body Focused Repetitive Behaviors, which is researching the behaviors. To date, cognitive behavioral therapy has been used to track these disorders. Doctors ask patients to write down when they are doing the behavior, and then analyze the patterns and triggers for it. Aneela Kumar noticed that she was doing it when she was in a state of stress. The Liv was designed to help her become aware of it.

Liv offers its alerts in real time, as you are doing something compulsive. It is designed to keep you alert to the position of your hands. The app provides a visualization of your behavior, helping you track progress and identify potential triggers. It tries to making the journaling process easier and more automated. 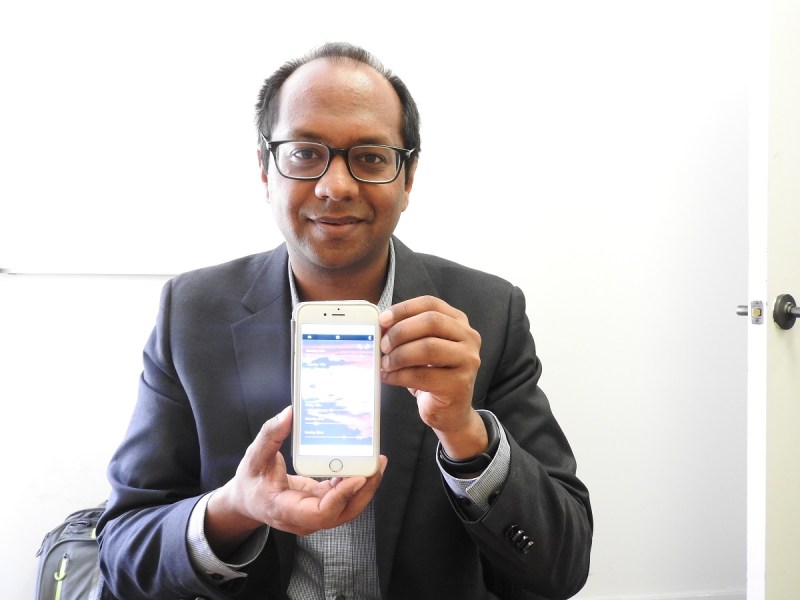 Above: Sameer Kumar, cofounder of HabitAware.

Liv can also send you a text message when a high-stress time is approaching. The app suggests positive strategies, such as timely tips on how you can replace the behavior with a healthier one. It looks discreet, just like a fitness activity tracker. It subtly vibrates when you do an undesired motion, Sameer Kumar said.

He said it is appropriate for both adults and children. With the bracelet, Aneela Kumar has stopped pulling our her hairs — something she had been doing for 20 years. She has trained herself to take a walk when she is feeling stress.

“It’s an invisible disorder,” Sameer Kumar said. “It is downplayed as a nervous habit.”

“This technology is a breakthrough. Many professionals have dreamed of having this type of awareness bracelet for years to help people with hair pulling, nail biting, and other similar behaviors. It also has huge potential for future research,” said Novak, in a statement.

Sameer Kumar demoed the unit for me. You put on a band and use the app to assign it to one of your hands. Then you do a motion that mimics the compulsive behavior. You train it to recognize that behavior, and once it does, then it can send a vibration to the wristband when you do it. The app dashboard tells you how much you do it in a day.

Ideally, users would have one on both wrists. The app doesn’t eliminate all false positives when it comes to notifying the user of a behavior, but the company is working to improve that.

The company raised a small seed round of funding, and it has four employees.

“We are excited about what we can do for people,” Sameer Kumar said. “We know they are struggling with this. Awareness is the first step.” 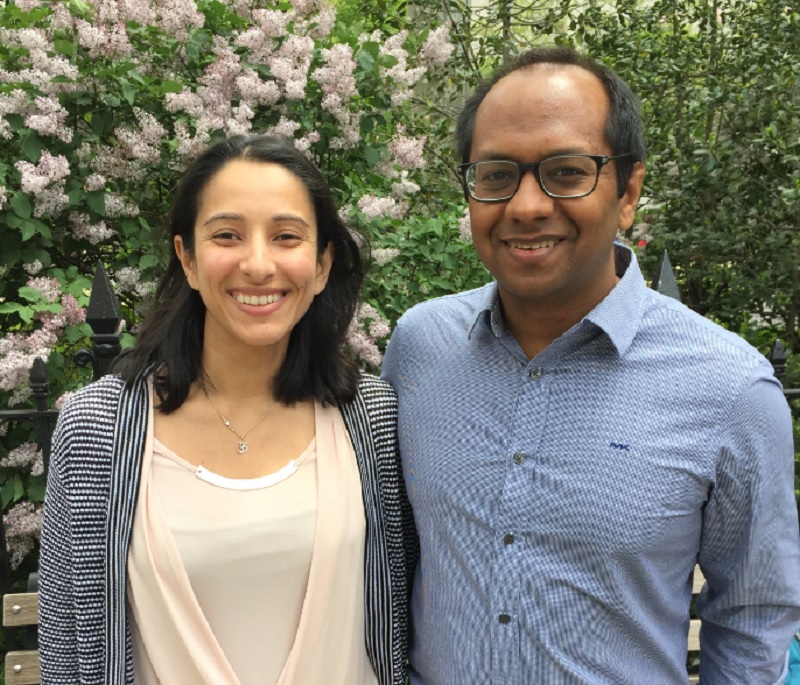 Above: Aneela and Sameer Kumar, founders of HabitAware.