Google has finally launched its mobile payments service, Android Pay, in the U.K. The updated app was quietly pushed live yesterday, and Google has now officially confirmed that Android Pay is available for anyone in the U.K., assuming they have a compatible NFC-enabled device.

Similar to Apple Pay, Android Pay lets users purchase goods in physical retail stores by associating their MasterCard or Visa card with their device and swiping their phone against a contactless terminal at the point of sale. It can also be used to pay for things within third-party apps, including those by JD Sports, Deliveroo, Zara, Kickstarter, and YPlan. This is designed to save consumers from having to re-enter their payments details in multiple apps. Crucially, Android Pay can also be used on London’s public transport network, including the Tube and buses. 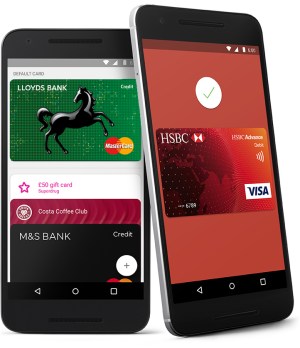 The Internet giant launched its Apple Pay competitor last May, but so far, the feature has only been available in the U.S. Google did confirm back in March, however, that Android Pay would be landing in the U.K. some time in the next few months. And it had previously teased an Australia launch for the first half of 2016, though that has yet to come to fruition. The company has now confirmed that it will be launching in Australia and Singapore “soon,” with more countries added to the mix in the coming months. So it sounds as though the U.K. is serving as the launchpad for a major global rollout across 2016.

Google had previously confirmed that eight banks would be on board for launch — Bank of Scotland, First Direct, Halifax, HSBC, Lloyds Bank, M&S Bank, MBNA, and Nationwide Building Society, though it did note that more would be added. Notably absent at the time of launch is Barclays, one of the U.K.’s biggest banks, which is a major omission. Barclays was also slow to embrace Apple Pay, which has been available in the U.K. since last summer. However, it did finally join the service last month.

Though Google may be playing catch-up with Apple Pay in the U.K., it has beaten a more direct competitor to market — Samsung Pay is currently still only available in the U.S. and South Korea.

Google also noted that it’s launching a special offers service in the U.K. called “Android Pay Day,” which will feature rewards and promotions by some major retail brands, including Starbucks, in the week before payday.