Motion AI, a Chicago company that lets anyone easily build a bot without touching a line of code, has announced it is open to business after several months of private testing.

What, another bot-builder? Dozens of other startups have launched to build bots for developers, especially after Facebook kicked off a bot craze last month that now has tens of thousands of developers building bots on Facebook Messenger alone. 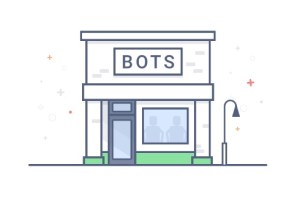 But Motion AI stands out because it hand-holds you through building every aspect of the bot’s flow, including deployment across most of the bot platforms (Facebook, Slack, SMS, email, Web and so on). Moreover, it has created what it calls bot “modules,” which package up the logic required for building particular bot features. This saves novices — and even experienced developers — multiple steps. These modules will soon be featured in a store (to be launched in about a month) where customers can take whatever module they need as they put together their bots, according to founder and chief executive David Nelson.

For example, Motion AI’s modules let you easily build a “customer service triage” bot. It does this by offering “Yes/No,” “Multiple Choice,” and a series of other modules that send and receive data from a service called Zapier. In 20 minutes, Nelson said, he was able to build his own bot that uses a connection with Zendesk software. The bot lets you scan your company’s knowledgebase for answers to incoming customer questions; if that doesn’t come up with an answer to the customer’s question, the bot creates a support ticket automatically through a connection with Groove. Here’s a video of the bot he made, depicting an unofficial Apple support bot. Motion AI simply passes along the cost of the connections to the customer.

Another module in popular demand is one that completes customer satisfaction surveys, Nelson said. Motion AI also handles the basic infrastructure for deploying bots, so that you don’t have to sign up to Twilio to run a bot over SMS or SendGrid to run it over email. Motion AI handles all of this for you. It also lets you import artificial intelligence or natural language processing services, like Facebook-owned Wit.ai or Api.ai, into your bot without having to spin up servers of your own.

Nelson, who has a software development background, said the module idea came to him last year when he noticed developers spending significant amounts of time reinventing the wheel each time they built a bot, piecing together the same services. Why not help them save time?

Nelson said the company’s support of integration services like IFTTT and Zapier have made the possibilities of what third-party services you can integrate “pretty limitless.”

Motion AI also handles things like analytics and reports on how the bot is being used after deployment. There’s a good video overview here.

Nelson said several big companies are experimenting with the software, including a large national health care company that is triaging and tracking patients in a trauma center, using data ingested from an SQL database and plugged into Motion AI. The bot then communicates with attending physicians.

Nelson has a ton of other ideas for how the service can be useful. He’s actively encouraging developers to build unique bots on the platform, like a “date-night planning bot” from modules that string together DoorDash, Fandango, and Uber, allowing couples to arrange a date that includes dinner, tickets to a movie, and a ride that picks you up to take you there.

Why not just launch this dating service bot on Facebook messenger himself? Nelson says he’s not in the business of launching completed bots. He’d rather let developers customize the date-night planning bot themselves, to make them fit the specific needs of, say, Kik’s younger audience or Slack’s business audience.

In December, the company raised a $700,000 seed round, with backing from 1QBit (a quantum computing company), Fiverr’s chief executive Micha Kaufman, former Yahoo chief marketing officer Kathy Savitt, and a number of other angels.

The company has four employees.