Notion has raised $3.2 million in venture funding so that it can bring the Internet of Things (making everyday objects smart and connected) to home monitoring. Notion is offering a home-awareness system that uses sensors to alert you when something is going wrong, such as a home intrusion or water leak.

Denver-based Notion has already shipped more than 10,000 preordered units to homes around the country. The funding from XL Innovate, a venture capital firm that specializes in insurance, and Liberty Mutual Strategic Ventures will help the company grow to its next stage.

Notion wants to expand on the Web and in retail to provide millions of homeowners with safety, peace of mind, and savings. The company is trying to go a step further than rivals such as Google’s Next by creating a complete system of smart sensors. Notion’s initial product is a small, multi-function sensor with eight different capabilities. Each sensor starts at $129, with discounts for multiple purchases.

The sensor can recognize water leaks, the opening of doors and windows, temperature changes, smoke alarms going off, acceleration and motion (for movement, like an earthquake), light changes, natural frequency, and angular rate. These sensors can detect whether a door or window has been broken, for example, or whether anything else is amiss.

Notion said the home-monitoring system can be up and running within five minutes or less. It sends alerts to homeowners via a mobile app on both iOS and Android.

Traditional home security systems cost an average of $2,500 over the required three-year contract period. And most do-it-yourself alternatives can be overly complicated, resulting in a poor user experience and inadequate coverage. While insurance companies already provide discounts for security systems, the second leading cause of insurance claims is actually water leaks, which cause in excess of $8 billion in losses every year (Source: ISO, a Verisk Analytics business).

“For years, people have been able to receive discounts on their homeowners’ insurance by installing a security system. However, these systems typically come with high costs, long-term contracts, and minimal functionality, resulting in only about 20 percent adoption in the US,” said Brett Jurgens, cofounder and CEO of Notion, in a statement. “Our goal is to provide the remaining 112 million homeowners [who are] without a security system, with the smartest solution to protect their homes and families. We want to bring the promise of IoT to all homeowners by addressing their biggest needs in a readily accessible and affordable package.”

Notion has already sold over $500,000 worth of devices and shipped all of its crowdfunded preorders, as of May 2016.

“By bringing a super smart and simple IoT solution to homeowners, Notion can change both a homeowner’s experience as well as transform the insurance industry,” says Martha Notaras, a partner at XL Innovate. “Simple, reliable sensors that are easily deployed and capable of capturing relevant data can lead to a significant prevention of property damage. Homeowners benefit by having 24/7 insight into the health of their home and insurers can offer loss reduction initiatives. It’s a win-win.”

Notaras is joining the Notion board of directors. The company has 11 employees and has raised $5.7 million to date. Founders Jurgens and Ryan Margoles grew up together and had been thinking about startup ideas for a while. One day, Margoles had a smoke alarm go off because the battery was low. His new golden retriever puppy was frazzled by the time Margoles got home from work. He thought it would be a good idea to build a smart smoke alarm that could alert you when you weren’t home. He and Jurgens say they had this idea before Nest came out with Nest Protect. 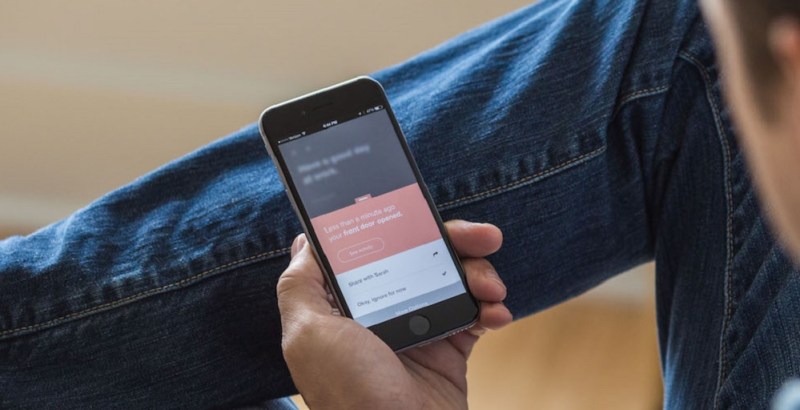 Above: Notion is a IoT home awareness system