While construction crews work furiously to finish Apple’s mammoth new headquarters in Cupertino this year, another critical piece of the campus’ design is taking shape 100 miles to the east.

In a cluster of East Bay nurseries, Apple has been growing more than 4,600 trees, which are nestled in large, wooden boxes. Some time later this year, Apple’s team of arborists will start shipping these trees two or three at time to Cupertino, where they will be painstakingly planted as part of the broader landscaping plan.

The investment in these trees represents the kind of attention to detail, quality, and finish that is classic Apple. Rather than just planting seedlings and watching them develop slowly over 20 years, as many developers do, Apple is hoping to come as close as possible to creating the sensation of a thick, forest-like wonderland right from the start.

Other companies and municipalities have routinely purchased and transplanted fully grown trees. In this case, it’s the scale of Apple’s landscaping plans that seem to have no precedent, arborists say.

Naturally, it appears to be the kind of thing only Apple would attempt.

“It’s pretty ambitious,” said one Bay Area arborist, who is familiar with Apple’s plans but asked not to be named. “Some of these development projects, they don’t see the value of transplanting these larger trees. They only see the dollars and say, ‘Oh my goodness, it’s so expensive.’ But some people recognize that if I bring in old trees, that as soon as my project opens, I’m going to have a landscape that is already pretty established.

From the moment Apple proposed its audacious new campus in 2011, it has emphasized how green it would be. Where the old property, previously owned primarily by Hewlett-Packard, was mostly concrete, the new campus will be an overwhelmingly green space for the estimated 14,000 workers who will call it home.

“Today, about 20 percent of the space is landscaping, most of it is big asphalt parking lots,” cofounder Steve Jobs said when first presenting the plans to the Cupertino City Council. “We want to completely change this and make 80 percent of it landscaping. And the way we’re going to do this – we’re going to put most of the parking underground. And you can see what we have in mind. Today there are 3,700 trees on the property, we’d like to almost double that.”

For Jobs, who grew up in the region, it was a chance to recapture the lost feel of an area that was once mostly open spaces and fruit orchards before it gave way to low-slung, drab office buildings.

“The landscape design of meadows and woodlands will create an ecologically rich oak savanna reminiscent of the early Santa Clara Valley,” Apple said in its proposal. “It will incorporate both young and mature trees, and native and drought tolerant plants that will thrive in Santa Clara County with minimal water consumption. The increase in permeable surfaces will promote natural drainage and improve water quality in Calabazas Creek. The thoughtful and extensive landscaping will recall Cupertino’s pre-agricultural and agricultural past.”

An Apple spokesman said the company had no comment at this time about its tree plans.

However, official planning documents filed with Cupertino and other public records from 2013 and 2014 provide tremendous details. While it’s likely the precise numbers of trees and the exact time frame have evolved since then, the public filings still give a sense of the sweep of Apple’s ambitious tree plans.

Apple has confirmed publicly that the total number of trees planted will exceed 8,000. That’s a big increase over the 3,616 that were on the land before. And it’s well over the 4,422-tree minimum that would have been required by Cupertino planning rules. 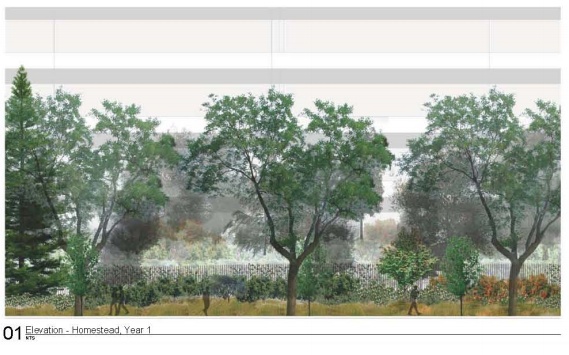 Above: This rendering above is what Apple hopes the landscape will look like during the first year with the trees planted and the main building in the background. 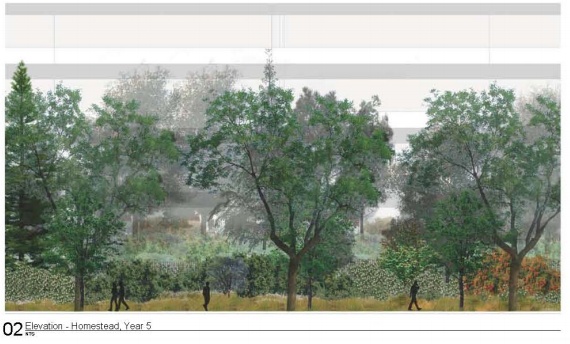 Above: The same view after 5 years.

To oversee its arboreal ambitions, Apple hired Palo Alto arborist Dave Muffly to be its tree whisperer. Muffly was already a well-known figure among Bay Area conservation groups, long before his Apple posting.

Over the past several years, Muffly has been leading a team entrusted with implementing Apple’s tree strategy. The plan has three parts. 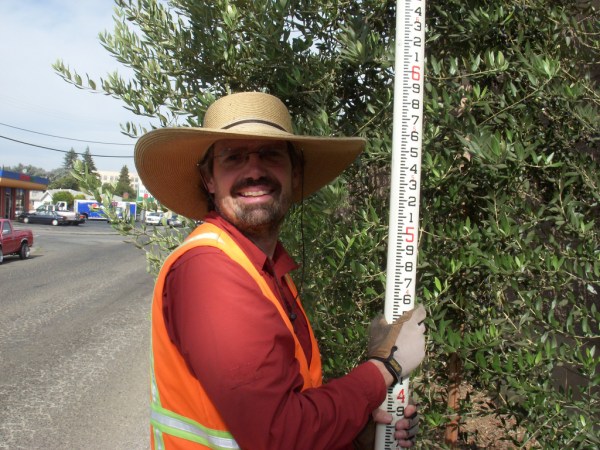 The first part involves preserving the best trees already on the site for replanting later. According to planning documents, Apple intended to remove 3,616 trees from the land before construction could begin.

Muffly selected and stored 800 of the healthiest and most attractive of those trees and “boxed” them so they could be stored in a corner of the construction site. A report from the city’s consulting arborist, Michael Bench, included photos of a couple of trees from the site being readied for transplantation to these large boxes: 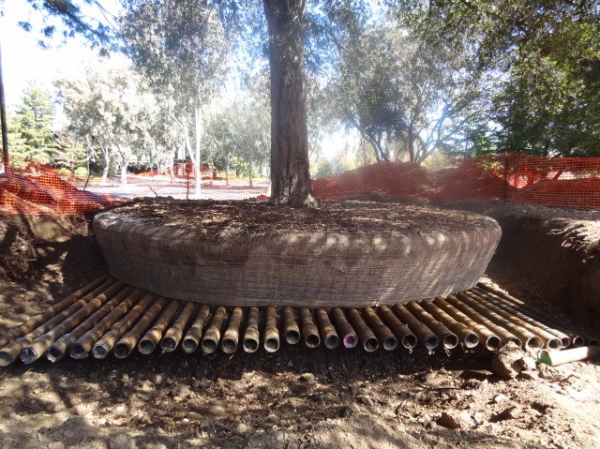 Above: A tree being prepared for storage at the Apple Campus 2.

As Bench explained the painstaking process in his October 2013 report: “The pipes are driven under the root ball using a pneumatic hammer. A large I-Beam will be bolted to these pipes on the 2 sides where they extend past the root ball. When it is time to transplant the trees, cranes will affix cables to the I-Beams to lift and move the tree. The root balls are being irrigated and will continue to be irrigated on a regular schedule for up to 5 years.”

The second part of the strategy involves planting saplings. Apple said back in 2013 that about 960 trees planted at the new HQ would be tiny, new trees.

But the third part of Duffly’s work is the biggest: The vast majority of replacement trees, about 4,640, are in various stages of being grown, according to city records. And, as Apple notes in the documents: “Trees will be planted at much larger sizes than required.”

That is an understatement. The majority of trees removed (about 3,500) were put into boxes that were up to 24 inches in height. More than two-thirds of the replacement trees that Apple is growing will be in boxes ranging in size from 36 to 156 inches in height.

About one-third of the trees on the campus will be evergreen oaks. There will also be 600 fruit trees, along with olive trees and conifers.

The result, when the initial planting stage is completed, will be a canopy-like effect over much of the campus, even from the earliest days. But getting from here to there will still be an epic undertaking, with plenty of risks involved.

Most of the replacement trees are being grown by nurseries operated by a company called Valley Crest. The majority of them are at a Valley Crest nursery site in Farmington, California (a bit east of Stockton, Calif.): 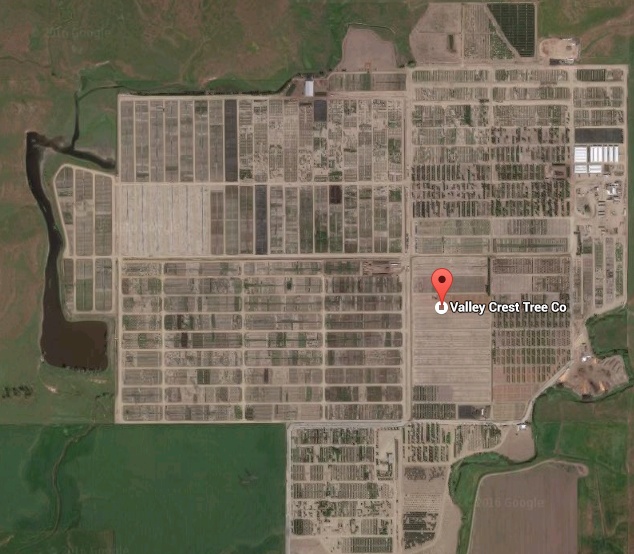 Above: Valley Crest nursery near Farmington

About 20 percent of the trees are being grown at a Valley Crest nursery site in Sunol, Calif.: 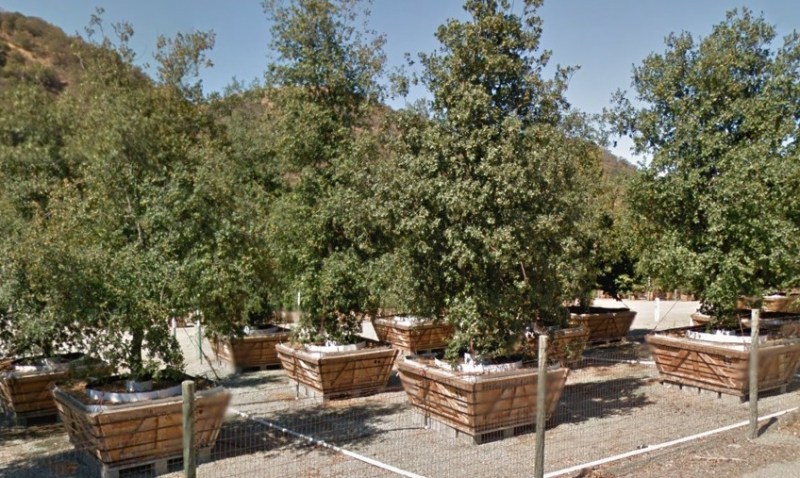 Above: Apple Campus 2 trees being grown at the Valley Crest Nursery in Sunol.

While some of the trees were purchased from Valley Crest’s stock, Muffly has also been scouring the West Coast for older-growth trees that could be relocated to one of Valley Crest’s sites. Bench noted in his reports that many of the oak trees had been purchased from another location near Clear Lake (to the north) and moved to the Sunol site. Some trees came from as far away as Oregon and New Mexico, Bench reported.

Many of these relocated trees were already between three and seven years old when they arrived at Valley Crest. By the time these trees are planted at the Apple Campus, some could be 20 years old, Bench said.

Taking care of these trees while they await their new home is laborious. Bench explained that some of the largest trees must be shifted to bigger boxes over time, often at least twice before they are planted.

While touring the Sunol site back in 2013, Bench also noted: “These trees are well-spaced apart, compared to many trees seen jammed together at nursery sites. This is to assure that each tree receives full sun on all sides without being shaded by adjacent trees. This helps the trees to grow faster and have more uniform growth. Because space is a premium at wholesale nurseries, I suspect that Apple is paying additional in order to create this spacing. A large portion of the nursery at Sunol has been dedicated to growth of the Apple C2 trees.” 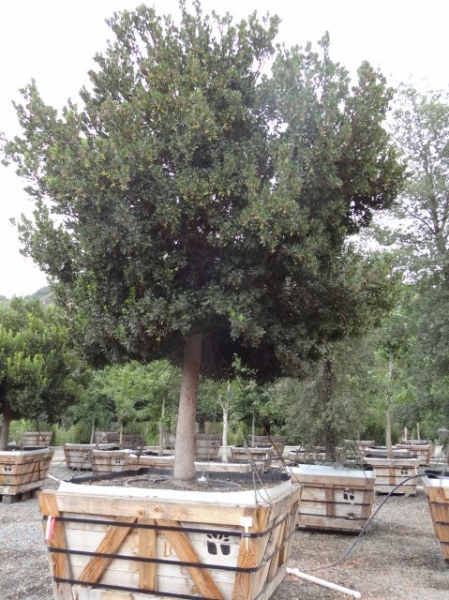 Above: Apple Campus 2 tree being grown at the Valley Crest nursery in Sunol.

When Apple is ready to start moving the trees, the passage will be slow and tricky, according to Mark Focht, who was president of American Society of Landscape Architects from 2012 to 2015.

The trees will be lifted by cranes and placed on the back of flatbed trucks and will then be driven more than 100 miles to Cupertino. With the trees so large, only a few can fit on a single truck at a time. And the move exposes them to wind, traffic, and other variables that usually result in at least some portion of the trees being damaged or lost.

Ultimately, the trees have to be maneuvered through city streets, dodging power lines and other hazards.

“I have not heard of this ever being done with thousands of trees,” Focht said. “I’m sure Apple did all this vetting and planning in advance. But their transportation costs will be quite high.”

However, Focht noted that this aggressive approach will offer some early dividends. For instance, the shade provided early on will help offset both heating and cooling costs for the facilities.

But while Apple has been focused on making the new campus environmentally friendly, the real payoff will be creating a unique work experience in a region where the fight for talent remains enormously competitive.

“This new development will provide a serene environment reflecting Apple’s brand values of innovation, ease of use and beauty,” the company wrote in its original proposal. “The entire Campus, indoors and out, is intended to promote shared creativity and collaboration and spur invention of the next several generations of Apple products.”