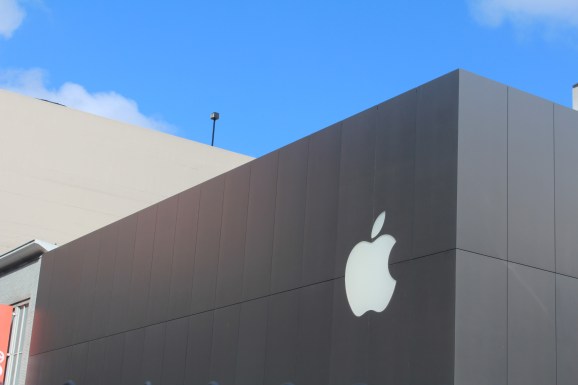 The Apple Store in San Francisco.

In fact, App Store revenues for Q1 2016 were 90 percent higher than those of Google Play, driven — in part — by in-app subscriptions within the likes of HBO NOW, Spotify, and Netflix.

But that isn’t the only staggering stat in the study, which focuses on App Store insights ahead of The Apple Worldwide Developers Conference (WWDC).

The report also notes that, despite strong monetization results, no mobile games ranked in the top ten monthly active users (MAU) in April 2016 in the U.S., U.K., or Japan. In fact, across all three regions, the MAU chart is dominated by messaging and social media apps such as Facebook, Facebook Messenger, LINE, Instagram, Snapchat, and Twitter.

“Messaging apps have catapulted into the stratosphere of the app economy in terms of adoption and usage, with over 90 percent penetration in several key markets,” Fabien Pierre-Nicolas, VP of MarCom at App Annie, told me. “Apps, in general, are still blowing up, with total time spent in apps growing by more than 60 percent on Android phones from 2014 to 2015. During 2015, global downloads across all stores hit 111 billion.”

That’s a lot of apps. Will we see messaging apps become the new app stores, hawking artificially intelligent bots to cater to our every whim?

“We’re not seeing app fatigue from consumers, and, most importantly, we see chatbots as a complement to apps, not a replacement for them,” Pierre-Nicolas said. “Similar to wearables or VR systems, chatbots are an extension of existing apps and, for example, can help with monetization and engagement for social apps or reach for transportation and retail apps.”

That said, the future looks bright for the chatbot revolution, something Mary Meeker played down in her most recent Internet Trends report (as we discussed recently in an episode of VB Engage).

“Chatbots might turn into a fascinating technology to watch, as more and more companies begin to develop and deploy them into apps,” Pierre-Nicolas said. “All the current chatbots in the West are in-app, like Kik bots or FB Messenger bots, to leverage the reach and engagement of those social platforms. It’s an alternative to integrating services directly, like WeChat or Kakao have done in Asia. The massive demand and popularity of messaging apps across all markets clearly shows a prime opportunity to feed the on-demand desires of consumers.”

For now, App Annie’s report shows that users spent more time in messaging apps than in any other category in April 2016.

In the U.S., Facebook, Snapchat, and Instagram make up the top three. In fact, six of the top ten apps (by time spent) are social or messaging apps. The other four? Pandora, YouTube, and Spotify rank highly for time spent in-app, and Google’s search app for iOS comes in at number 10.

Noticeably, all of the apps in the ‘time spent’ chart were launched during or before 2012. How important is first-to-launch advantage, and can any new app hope to measure up to the leaders?

“The first-to-launch advantage plays a small role in the overall performance and success of an app,” Pierre-Nicolas said. “It all comes down to user experience and refining it over and over in the mindset of providing the best service possible to the user, and also achieving the best retention possible as a business. You’ll see that every app releases new or updated features — that add additional value — on a regular basis. No app will be able to offer everything you need to address every customer need or demand right off the bat. The most successful apps are those that have taken advantage of not only time, but use data to tweak and adjust their offerings to better meet the desires of their users.”

Attention and time spent in-app clearly help drive revenue. What factors have led to the 90 percent higher revenues generated by the App Store versus Google Play? And why is this the case, when iOS has such low global market share compared to Android?

“Any app-related revenue is directly tied to usage — the more time users spend in an app, the more opportunities businesses have to reach their customers, retain their customers, and raise revenue,” Pierre-Nicolas said.

App Annie is seeing a 63 percent increase of overall time spent year-over-year. In turn, Apple’s user-centric operating systems and devices are more likely to delight their users and facilitate strong monetization when combined with the often higher income demographics purchasing iPhones. But while this outstanding user experience helps with monetization per user, the prices of the devices are still a limiting factor when it comes to the potential addressable audiences in many smartphone markets. Many of these markets are still experiencing fast growth in the number of new subscribers, like India or Southeast Asia, where Android reigns supreme.

Also ahead of WWDC, Apple has announced significant changes to the App Store. These may have serious repercussions for both developers and users, but one thing is uncertain: How will App Annie’s revenue report look six months from now, once the new auto-renewing subscription model beds in? We’ll watch with interest.