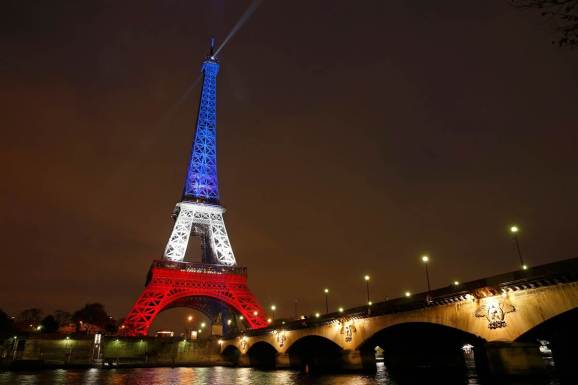 The Eiffel Tower is lit with the colors of the French flag in Paris.

Disclosure: Business France, an agency of the French government that promotes the country’s economy, organized a tour of Paris’ startup community and paid for my travel and hotel.

A recent tour of the Paris tech ecosystem for a contingent of international journalists provided me with additional confirmation of what I have seen and felt during the almost two years I have lived in France: The country is experiencing a groundswell of entrepreneurship that marks a radical break from its past.

You won’t find many folks in France today who would disagree with that assessment. Whether this surge will last, or succeed in the long run, remains to be seen. But France is definitely having its startup moment.

Unfortunately for some of these French entrepreneurs, one journalist on our tour came away with a rather sour take on all this activity. And, as a result, the French startup ecosystem has lost its collective fucking mind.

“My considered assessment is that the French government, and to an extent the larger French tech scene, lacks ambition, boldness, and confidence, and their technology strategy is doomed to failure.”

He apparently heard and saw very different things from what I did on the tour. But, you know, it happens. I do think he fundamentally misunderstands French government policies when he writes:

“Their stated aim was to foster tech startups in France in order to support France’s largest companies.”

I have never heard a single government official say that. (More on that in a moment.) But my larger point is not about his argument, but rather the intense reaction it has received.

In emails, Facebook and Twitter messages, and even on LinkedIn, I have been inundated with messages from people who knew I was on the same tour, asking whether I’m going to write a rebuttal or whether I agree, or what. It’s finally gotten to the point where my productivity has fallen to zero, and so I decided to hit the pause button on another piece from the trip and write this post instead.

Of course, all it takes is one negative story for the French to engage in their favorite activity: Self-flagellation. Nobody likes to criticize the French or the French government as much as the French themselves.

And, naturally, the criticisms have not actually been directed at Evans, or his take. Nobody here is saying, “Hey, I beg to differ, and here’s why.” Because when an outsider says France is terrible at something, all too often the instinct here is to say, “Yeah, they’re right. We’re terrible.”

Instead, the responses I’ve received are more directed at the organizers of the tour and whether they showed journalists the right startups or visited the right accelerators. Because if something went wrong, it must be the fault of someone in France, right?

Let me pause here and say unto you, oh entrepreneurs of France: Chill.

I get that you believe French startups are already trudging uphill against decades of negative stereotypes. The tour itself was meant to be a small part of an ongoing effort to change that reputation by displaying the best and the brightest of the city’s startup system. There were a couple of dozen journalists there, and I’m sure they all came away with their own views, good and bad, of what’s happening in France.

And I certainly have my own critiques about both the accomplishments and the challenges facing French entrepreneurs.

But with respect to Evans and TechCrunch, if you truly believe that venture capitalists around the world are going to base their entire investment thesis and view of France on a single article written by any journalist, then you are hopelessly naive about the way the world works. You are vastly overestimating the power that I, or any other journalist, have when it comes to this realm. And any VC who would follow such a strategy is not a VC you want investing in your company.

Here’s what worse, though: Whether Evans is right or wrong, the startup freak-out over one single blog post reveals much more about a nation’s collective insecurity than it does about the power of such influencers in this day and age. If the psyche here is still so fragile that it can be shattered by a single blog post, then you have a much bigger problem: Yourselves.

In essence, you are proving at least part of his criticism correct by demonstrating how little confidence you have in what is happening here and what entrepreneurs are doing.

If you want the world to take you seriously, that starts with having tremendous belief in yourself and the possibilities here, and at least a little pride. You probably don’t want to turn into a nation of overconfident brogrammers like the kind that have run amok in Silicon Valley. But French startups could certainly use a bit more self-confidence at the moment.

The thing is, there’s plenty going on that should give the nation’s startups reason to feel confident and optimistic. Things that even Evans points out. There’s the growing international reputation of unicorns like BlaBlaCar and Sigfox. There are people like Cisco Systems’ John Chambers praising the country’s tech scene and backing that with plans for $200 million in investment here. And hell, France had more startups raise money in Q1 this year than any other country in Europe.

More importantly (and this is what I really want to write about), young people aspire to be entrepreneurs in growing numbers.

But you know, whatever. Because someone wrote a blog post saying mean things about France. Well, boo-fucking-hoo.

French entrepreneurs have to stop incessantly worrying about their image and craving the approval of every single person around the world. Some people are always going to think France is hopeless.

Let me tell you, there are plenty of people who think Silicon Valley is screwed up for all sorts of different reasons. But do you think any entrepreneur is losing sleep over a critical story written by a journalist? Nope. (Well, okay, Peter Thiel, but…) So stop worrying what I or any other journalist think about you or France.

What ultimately will matter, as anyone in Silicon Valley would argue, is results. And, at the moment, there is serious mojo here. I think it will take a decade or so to really know for sure whether the current wave of entrepreneurial fever is transformative or just a distraction on the road to economic ruin.

But, for now, don’t be afraid to walk with a little swagger.

Now, on the topic of the French government’s economic policy, one could probably write several volumes about the aggressive approach to funding and supporting startups here. It is a complex, all-encompassing approach with many moving parts designed to overcome many obstacles. The wisdom of this approach certainly merits robust debate, and there are many corners of the French tech ecosystem who despise it and long to be more libertarian than even the most libertarian corners of Silicon Valley. Or, Silicon Valley as they imagine it to be, anyway.

Yet without listing every single initiative, one thing that seems clear to me is that the goal of the government is not to nourish startups just for the sake of protecting incumbents. Certainly, I never heard Lemaire say that in her remarks to journalists on the tour, nor have I ever heard any government minister or official articulate such a position.

Rather, what I’ve heard government officials lament numerous times is the fact that the top 40 companies on the Paris stock exchange (the CAC 40) have been almost completely unchanged for decades. This stands in direct contrast to things like the NASDAQ index, which is constantly shifting. And there is a great desire to see the nation create its own crop of tech giants.

What the government does want, and what Lemaire was discussing at the meeting, is for these large companies to invest more in their IT and in revolutionizing their own businesses. Many of them have been stagnant, which is a factor in the rising unemployment among young people in France.

The national government wants to do the same thing for itself, and for local and regional governments as well. Between companies and government in France, you would be shocked at how much business is still paper-based.

Becoming a big purchaser of IT — whether as a corporation or a government — just seems like a logical, non-controversial way to boost up-and-coming startups. IBM is what it is today because the U.S. government created the Social Security Administration in the 1930s and needed someone to build machines to bring more automation to the massive paperwork involved. Companies like Cisco Systems and Oracle derive huge portions of their revenue from government contracts.

The idea is to provide incentives that encourage these companies and governments to modernize, in the hopes that they will become purchasers of the new technologies created by French startups. And yes, in some cases, the idea is that they will acquire startups. But that’s no different from the U.S. or Silicon Valley, where the overwhelming number of exits for startups will be through acquisitions.

As part of this push, you hear pretty consistently across France (and Europe) that startups need to be thinking globally. Whether they take funding from the French government or not, I hear startups repeating this idea. I have never heard, as Evans apparently did, a single entrepreneur say they were hoping to just succeed in the French market. And this global message is one that the French government delivers all the time.

Indeed, when Paris-based connected object startup Withings (which has global reach) was acquired by Nokia recently for about $190 million, I heard quite a number of people here express disappointment that the price wasn’t higher and that the startup hadn’t tried harder to remain independent. A few years ago, any exit would have been met with applause, I think. Now, the French clearly want their startups to be thinking bigger.

Still, the founders of Withings will do quite well, I’m sure. And hopefully, some of them will take that money and plow it back into French startups as angel investors. Or maybe they’ll go start their own new companies, and a new crop of entrepreneurs will learn from their journey.

At least, that’s the hope. Whether that happens, though, will be determined by the will and inventiveness and ambition of French entrepreneurs and not by what I, or any other journalist, writes about you.