Disclosure: Business France, an agency of the French government that promotes the country’s economy, organized a tour of Paris’ startup community and paid for my travel and hotel.

During a week I spent trucking around the Paris ecosystem with a gaggle of international journalists, we were pitched by at least 30 startups who are doing everything from building some interesting apps to trying to reimagine the architecture of data centers.

It would be impossible to sort through all of them. But here are six that have really stuck with me in the weeks since that trip:

This is one of Paris’ most buzzed-about startups, but one that is still flying below the global radar. Snips has raised about $6.3 million and has just launched its first product: an artificial intelligence app for the iPhone. And it’s cofounded by a trio of well-regarded A.I. programmers with PhDs.

At the moment, the usage is basic. You connect your apps on your iPhone to Snips, and it begins to read everything. And I mean everything. The goal is to let it start learning everything about you so that over time it becomes a hyper-smart personal assistant.

The twist is that to encourage you to give it as much info as you can, Snips takes a strong approach to privacy by doing all the computing on your phone. Unlike, say, many Google apps, the data is not sent and stored on some far-off server for the heaving computing. The founders say this is a first step, and the app just went live a few weeks ago.

The company is reportedly close to raising another round of financing. But it does face some tough competition. The launch of the app came just as Google was unveiling a series of chat and personalized services with A.I. baked in.

Still, the company is betting that its approach to privacy and its long-term vision will give it an edge. And my instinct, after having met the team and played with the app a bit, is that I wouldn’t be at all surprised to see Apple sniffing around the company, with A.I. becoming a bigger part of how smartphones work in the near future. 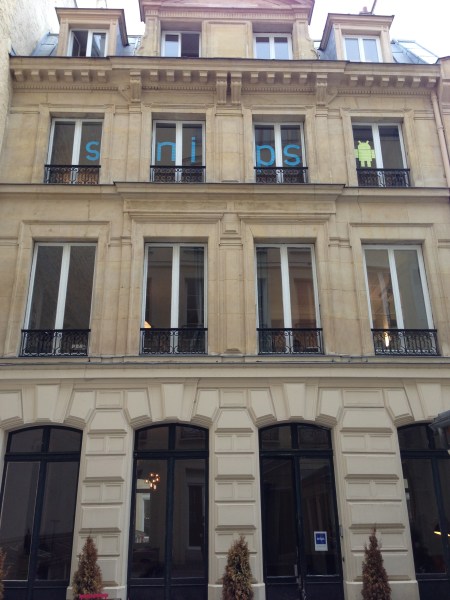 Above: Snips headquarters in Paris.

“A” by Akoustic Arts

This little company, Akoustic Arts, is developing a speaker that is uni-directional: That is, you can only hear the sound when it’s pointed directly at you.

As we heard in a live demo, when the speaker is turned even slightly away from you, the sound completely vanishes. It’s currently being developed at Usine IO, a kind of hardware lab in Paris. And the founders are running a campaign on Indiegogo, though they have already well exceeded their goal.

The hope is that the speaker could be of interest in places like museums, for guided tours; airplanes, for when you’re watching a movie (goodbye headphones!); or retail spaces. The company also plans to go after the consumer market with a version that you can use with your TV, so one person on the couch can listen to a movie with the sound up while a person sitting next to them is quietly reading a book. 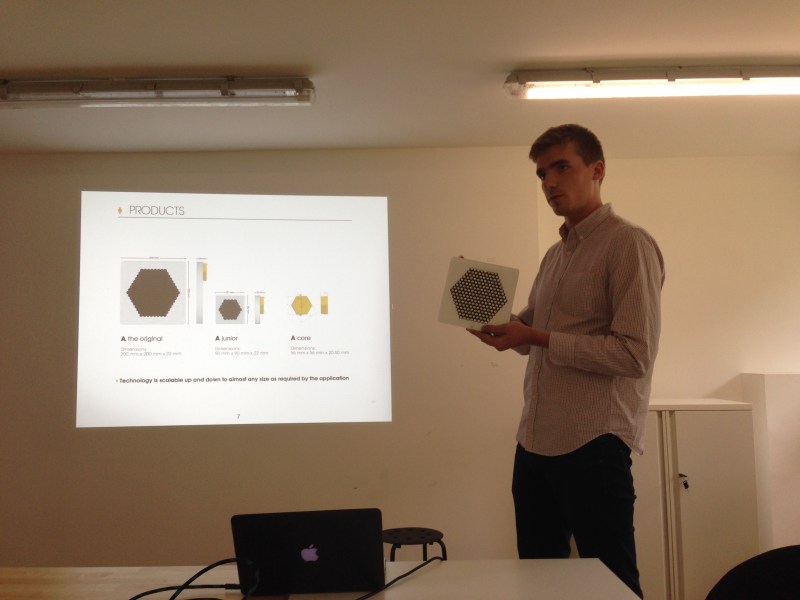 Above: The “A,” a directional speaker.

This startup was part of the most recent class of companies working out of Paris’ NUMA accelerator program. Yellow is a virtual flirting app built on top of Snapchat.

The idea is to allow you to find people to flirt with who you never intend to meet in real life. Could be fun. Could be creepy. We’ll see. But for the moment, the app, which quietly launched last October on iOS and Android, has snagged 400,000 sign-ups, which has translated into 117,000 monthly active users.

Most importantly, the company says that about 60 percent of users continue to use the app after one month, and the app is getting about 10 million swipes per day.

I’m not a Snapchat user. But this seems to hint at the kind of ecosystem of apps that could be coming to leverage Snapchat’s rapid growth.

The engineers behind this project, also recent participants in the NUMA accelerator, have designed a new breed of wireless charger that, unlike most others, doesn’t use induction. That means it doesn’t use electromagnetic waves, and multiple devices can be charged at one time.

All you have to do is place a sticker on the back of a gadget and plop it on the Energy Square. And, in the demo we saw, the charging rate was pretty rapid. The founders claim it is several times faster than most pokey wireless charging solutions.

The basic cost is expected to be around $77, and the hope is to start shipping later this year.

This is one of those ideas that is either completely insane or could possibly change the world.

Okay, maybe not change the world. But at least have a pretty major impact. Qarnot Computing wants to reinvent the concept of the data center by building a distributed network of servers around the world, with a series of algorithms and software to manage the computing loads between them for customers using cloud services.

But here’s the twist: Qarnot wants to house those servers in heating units and install them in apartments, homes, and offices to replace the central heating system. The problem with the current data center model is that servers are bunched in a single facility, requiring massive amounts of cooling and gobbling up a growing share of the world’s energy use.

Qarnot hopes to end that upward spiral by making use of the heat generated and eliminating the need for massive cooling. The company is still figuring out things like how energy rebates would work, but between cost savings and rebates, your overall heating bill would theoretically drop to zero if you placed one of these in your home or office.

Of course, this idea presents massive logistical issues, like how to install enough units to be effective and how to install the infrastructure (wires, etc.) that goes along with it. And then the company needs to have enough units distributed around the world to account for different use patterns across the seasons.

Still, it’s an intriguing idea. And one that would seem to have enormous potential — if they can pull it off.

This lending platform has already raised $55 million and, according to its founders, is looking to raise another $100 million in the next year or so. It basically wants to be the LendingClub of Europe. This goal is both ambitious and a bit problematic, given the controversy that hit the latter recently.

Still, in a country and a continent where the financial industries have been slow to adapt, Younited is racing ahead pretty quickly with its crowdsourced lending model. What happens over the next year could determine whether it becomes France’s next unicorn.