Gogobot has built a solid reputation over the past six years with a mobile app that recommends nearby activities for travelers and locals alike. But with its latest update, the California-based company is looking to bring artificial intelligence (A.I.) and automation to the mix.

Founded out of Menlo Park in 2010, Gogobot has taken on around $40 million in funding since its inception and claimed to have 10 million users last year. The company previously declared its intentions in the A.I. space when it hired a former SRI senior scientist back in 2012 — Osher Yadgar had helped work on virtual personal assistant technology related to Siri, the intelligent assistant that powers services on iOS. Though Yadgar departed Gogobot after a year, the company has continued working behind the scenes on new tools to predict what a user may want to do before they themselves know. 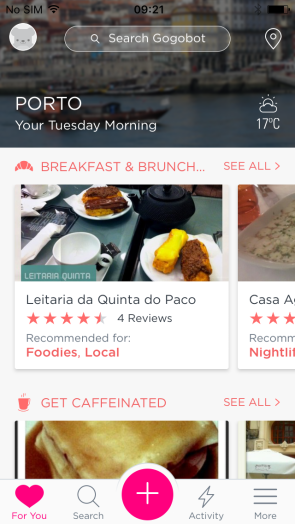 Gogobot’s latest update for iOS, with Android to follow, ushers in a “new breed of intelligent travel,” as the company puts it. Gogobot doesn’t want users to rely on manual search queries to find places to eat or things to do, it wants to use contextual information and millions of data points to serve up the best schedule the moment the app is launched.

“Most of the apps on your phone are old-fashioned,” said vice president of product, Zaid Al-Husseini. “They haven’t gone past search. They require hunting and pecking. They’re generic search-based products that help you find things, but you need to know what you’re looking for in order for them to be ‘helpful,’ and even after searching, they show generic results targeting the lowest common denominator. All that tapping around is an unnecessary time-suck for you.”

As before, the app asks about the travel style(s) you like — adventure, arts, business, family, food, history, LGBT, and so on — which Gogobot refers to as “tribes.” But now the app looks at things like what people search for most at a specific time of day, whether a user is a visitor or a local, and how far they generally travel to engage in an activity. It also factors in things like what day it is, the time of day, and what the weather is like.

The upshot of all this is that a local seeking something to do on a sunny Monday morning will be served a different bunch of suggestions than a visitor stuck in a strange city on a rainy Saturday.

The A.I. in travel

But by tapping additional contextual information, such as weather and time of day, and considering whether the user is a local or a tourist, Gogobot promises a more personalized automated experience. If you’re a local, it will skip the tourist haunts and surface local nuggets instead. And if it’s close to the weekend, the app may display other areas nearby that will require a short train or car journey.

“Gogobot’s new app is a smarter way to discover places to go and things to do,” added Travis Katz, founder and CEO of Gogobot. “We want you to spend your time having amazing experiences, not searching for them on your tiny bright screen. The new Gogobot app will actually be able to predict what you are looking for, so you don’t have to search at all, leveraging data from millions of queries to help identify the right things to do at the exactly the right time.”