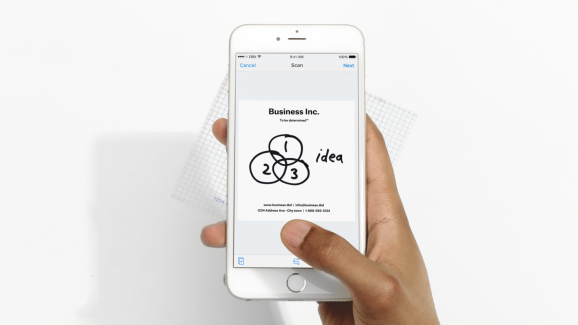 Cloud syncing and sharing software company Dropbox today is announcing a slew of new features for individuals and teams.

Probably the most significant addition is the ability to use the camera on a mobile device to scan in documents such as articles, receipts, and whiteboard drawings, and then get perfect virtual copies of them saved to your Dropbox. This feature is even more powerful for premium Dropbox Business users, because the documents are turned into searchable text using optical character recognition (OCR). Document scanning has come to other cloud storage applications, like Google Drive and Microsoft OneDrive; the latter has text search, while the former does not.

Today Dropbox is also giving its iOS app a new “plus” button from which users can start scanning documents. If they want to create a new file, they can start working on a new document in the Microsoft Word app, spreadsheet in Excel, or slide deck in PowerPoint. Of course, the files will be saved back to Dropbox. Something similar is possible with Box.

“We wanted to make this really seamless [and] integrated with all the tools users know and love,” Dropbox vice president for product and design Todd Jackson told reporters during a briefing at Dropbox headquarters in San Francisco earlier this week.

The new features make Dropbox, with upward of 500 million registered users, more appealing at a time when free users can easily go elsewhere. The efforts being taken to keep existing users and attract new ones makes sense given Dropbox’s need to keep growing and eventually justify an initial public offering (IPO).

Today, Dropbox is more widely rolling out the ability to comment on a specific area within a document. Previously, this was only available in the Dropbox for Business early access program.

On Mac and Windows, Dropbox will let users share files right from Finder and Windows Explorer, respectively, after right-clicking on the file.

Dropbox has also come out with a more secure means for people to share sensitive documents with colleagues. Rather than rely on links that can be pasted and shared further, Dropbox is letting users send out invitations to specific recipients that allow them to access files, while other people can only access the files by logging into Dropbox. And the new version history feature lets you go back in time and restore earlier versions of a file.

Today, Dropbox is also showing tech previews for features that aren’t available yet: the ability to see who’s currently viewing, and who has viewed, a particular file right as you’re also looking at it, as well as a general count for the number of times the file has been viewed. In addition to that, Dropbox demonstrated the upcoming ability to post new comments on files stored in Dropbox that you’re viewing inside Microsoft Office applications like Word, Excel, and PowerPoint.

See Jackson’s blog post for more detail on the news.