To encourage us to have more fun with our selfies, AOL is upping its filter game. Having seen the popularity of Snapchat when it comes to sharing creative photos, AOL today launched Switch, a face-tracking app that lets you create expressive selfies and then share them on social media. 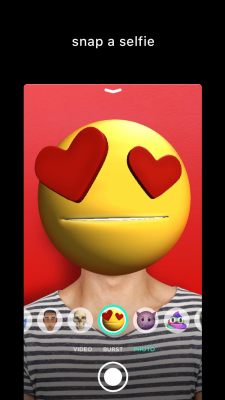 Above: Snap a selfie with AOL’s Switch app.

A product of AOL’s acquisition of Kanvas Labs and Nito, Switch automatically detects your face and will apply one of 21 filters — such as a tiger, chimp, black swan, laser eyes, or Old Man Winter. You can even “become” a celebrity, such as President Obama, or turn yourself into an emoji. The app contains three modes: photo, video, and a GIF-creation option. What Switch isn’t, is a social network, meaning that once you’ve produced the selfie you want, you should feel free to share it directly onto any of your social channels. Switch will keep all your previous selfies in a safe place.

If you see some similarities to Snapchat, you’re not mistaken. When asked about this, AOL senior vice president of core products Dave McDowell told VentureBeat that from the company’s experience with Kanvas, “users love filters. The first step we see users take is to draw on their faces or manipulate them using the tools provided. With Switch, we’re bringing them new options to help fuel creativity while better integrating with the various social media and messaging platforms they use…”

“Social media posts have always been seen as a means for expressing yourself, but in recent years, it’s moved from writing how you feel to showing how you feel,” he continued. “With Switch, we created a utility sharing app to distribute content across social networks and messaging apps – it’s not a network itself, on purpose. The idea is to showcase user’s personality across the various networks they use. Over time, the technology will be integrated into the core Kanvas network.” 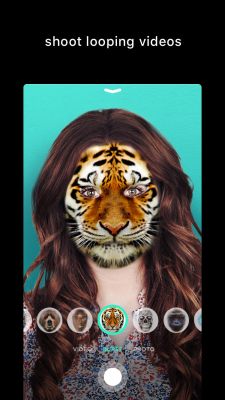 Above: AOL’s Switch lets you take video selfies and apply filters to them.

Everything about Switch was created in-house, including the face-tracking engine, special effects, and 3D avatars. The filters were also done by AOL staffers, so there’s little likelihood of the company encountering issues like Snapchat did recently over allegations of design-copying.

There’s rarely a moment when you can’t see someone taking a selfie, whether they’re on vacation, hanging out with their friends, meeting a celebrity, or just wearing something cute. So why not upgrade the traditional selfie capabilities with something more creative? Switch hopes to appeal to social media-obsessed individuals, those who already use social media every day and want to “spice up their posts.”

We’re told that this service ties into the broader focus of AOL, since it matches up with one of the “key pillars” of the company’s strategy, specifically around mobile, video, and social. McDowell remarked that AOL wants to deliver “new, mobile-first products for a new generation of users, where media is about creation as much as it is about consumption.”

The app is available right now in the App Store, and AOL said that it’s working to bring Switch to Android in the future.