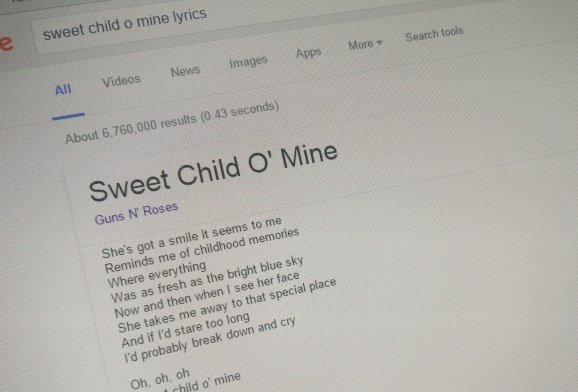 Song lyrics will soon be a more prominent feature within Google applications, now that LyricFind announced it has inked a deal with the internet giant.

Founded in 2004, LyricFind is one of the world’s largest lyric-licensing services and has signed agreements with more than 4,000 music publishers, including the four “majors”: EMI Music Publishing, Universal Music Publishing Group, Warner/Chappell Music Publishing, and Sony/ATV Music Publishing. In addition to granting the legal authority to republish lyrics, LyricFind also promises quality control — its database of songs is vetted for accuracy — and ensures royalties are paid to publishers.

Lyrics are among the most-searched for content on the internet, one of the reasons music-streaming services such as Spotify have long offered lyrics inside their apps and why Deezer partnered with LyricFind for a similar proposition a couple of years back.

In terms of how you can expect to see Google display these lyrics, well, when you search for songs with the word “lyrics” included in the Google search, you’ll see them displayed within the results themselves, while Google Play Music will also see lyrics introduced to complement the audio.

“We’re working together to make lyrics available to a larger audience in a faster and more efficient way,” said LyricFind CEO Darryl Ballantyne.

While this isn’t the first time Google has included lyrics in its search results, partnering with a major licensing service such as LyricFind is a notable evolution. It will also add to the growing list of Google content that bypasses the need to click on a search result because it is displayed on the main Search page — this includes word definitions, health information, nutrition data, and translations.

The new-and-improved lyric-infused search results are already available in the U.S., though no timetable has been given for a wider rollout. Royalties are paid to publishers based on “usage,” which, in this case, means how many times the lyrics are viewed.