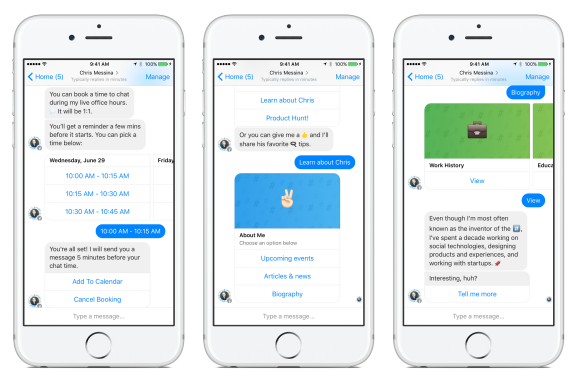 The MessinaBot will answer your questions now.

Last summer I joined a startup as the lead marketer. The cofounders had been part of multiple exits, and everyone on the team was exceptionally talented.

When I signed on, it looked like the next round of funding would be an easy raise  —  but boy, was I wrong. (The $$$ crunch is real, y’all!)

By the spring we were keenly aware of our rapidly diminishing runway, so we took reduced salaries and the CEO started shopping our team to potential buyers. The hope was that we’d find a soft landing where we could all stay together … but as the weeks dragged on it became a longer and longer shot.

The startup was tanking. Failure was imminent.

Since there wasn’t much left to do, I decided to work on a side project. I wanted it to be fun  — after all, it’d been a stressful and disappointing few months.

Bots: the next frontier of the social web

I’d been closely following the messaging trend and was spending my free time testing out bots.

We launched a Slack bot as an extension of our app, and although it never got any traction, I was convinced this nascent space was worth digging into. And the more I dug, the more it started to feel like the early days of the social web.

I know because I grew up in that era. I wrote a popular personal blog on Xanga (omg that’s really dating me!) and was one of the first success stories on YouTube.

As I watched the social web evolve, I’ve watched it bundle, then unbundle, and bundle back up again.

Today we’re living in an era of platform domination. Messaging platforms, in particular, are a huge opportunity  —  they give individuals and brands the chance to add value and earn attention in a place where people are active and engaged. So what will be built on these messaging platforms? It seems clear to me: bots and micro apps.

A side project comes to life

The side project I decided to work on was EstherBot, my personal resume bot. Not only was the timing fortuitous due to the company’s impending implosion, but it felt like a genuinely useful and engaging concept and one I was dying to test.

So I built the bot and open-sourced the code. The response was overwhelmingly positive  — in fact, more than 750 people have forked my repo to try to build their own.

The marketer in me couldn’t resist the opportunity to tell the story of EstherBot, which was shared in publications like Fast Company, Lifehacker, The Atlantic, and VentureBeat.

I set up a form to collect emails to see if anyone wanted their own bot. And people did. Lots and lots of people. (Go sign yourself up!)

My simple idea resonated. Plus I had tens of thousands of conversational data to mine for insights about where my personal bot soared and where it fell flat on its ass.

I decided to take what I learned and try again.

Today I’m launching MessinaBot  —  a personal bot for Chris Messina. He’s better known as the inventor of the hashtag and is the Developer Experience Lead at Uber. He’s also a man I care deeply about.

Facebook is going all-in on the Messenger Platform. They believe bots play an important role in bridging the gap between 1:1 communication and automation of routine requests and tasks.

My totally scripted resume bot presented my personal story to prospective employers, filtered inbound opportunities, and handed off intros so I could jump in and engage with people directly.

It wasn’t a perfectly smooth experience, but it led to dozen of job leads, several in-person interviews, and multiple real offers. I used this experience to build a better bot in MessinaBot.

This version takes a stab at solving a few of the key issues plaguing chatbots so far.

Chat provides an interesting design challenge when it comes to navigation.

My solution? Emoji + a main menu.

For MessinaBot, I introduced a home menu using Messenger’s carousel feature and added an emoji to each card, making it easier to jump around.

Chatbots are only as compelling as the content or utility they surface. There are four integrations in this bot:

Foursquare: Since Chris has been a longtime user and still checks in religiously on Swarm, it made sense to pull in a curated view of his food and drink preferences. This feature is also used to show his most recent location.

Product Hunt: He’s a heavy hitter on PH, so people can now submit requests for him to hunt their products through his bot. Plus his most recent hunts and comments are displayed.

Google calendar: It’s used for scheduling live chats — he’s testing out having office hours over Messenger. Be sure to sign up for a meeting!

Uber: By connecting your Uber account, you’ll occasionally receive messages from Chris while on a ride that offer recommendations for great spots near your destination (in select cities like SF and NYC).

My favorite part of MessinaBot is the live office hours.

Since the meetings are conducted over Messenger, he’s able to chat 1:1 with multiple people at once. And the best part is no emails or scheduling back-and-forths are required, which saves time for everyone.

You can book 15 mins to connect directly with Chris to talk startups, conversational commerce, the hashtag, Uber, or anything you’d like.

So, go ahead and try out MessinaBot!