What3words, a global addressing system that uses three words to describe precise locations, has raised $8.5 million in a Series B round led by logistics giant Aramex, with participation from existing investors, including Intel Capital, Force Over Mass Capital, and Mustard Seed. 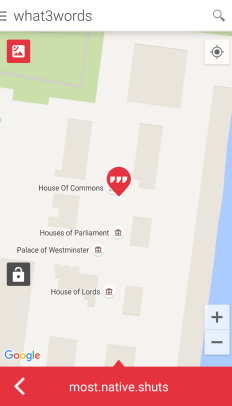 Founded out of the U.K. in 2013, What3words has partitioned the entire planet into around 57 trillion 3m x 3m squares — built upon the Google Maps API — and allocates each square a random three-word address. For example, a search for the “Houses of Parliament” in London reveals that part of it is “most.native.shuts.” Drag the pin around on the map, and you’ll see a random three different words for any other location.

Available on the web and through native mobile apps, What3words gives users access to an addressing system that bypasses zip codes, postal codes, and GPS coordinates. While it can be used for well-known points of interest and tourist attractions, it’s perhaps better used for places that don’t have an easy-to-describe “location” — for example, a tent in the middle of a large field or a hut in the desert.

Increasingly, the London-based company has been selling its location-based smarts to companies and organizations — last month, What3words partnered with Mongolia’s national postal delivery service, which has now adopted the addressing system in lieu of a consistent addressing system of its own within what is an expansive country.

Aramex is a major win for What3words, too — the logistics and transportation provider operates in 60 countries. Indeed, in addition to investing in the startup, it will now also adopt What3words within its ecommerce fulfillment operations across Asia, Africa, and the Middle East.

“By integrating three-word addresses into our ecommerce operations across the Middle East, Africa, and Asia, we are better able to reach more consumers worldwide, even those in difficult-to-access locations,” explained Aramex CEO Hussein Hachem. “The partnership is also perfectly aligned with our commitment to becoming a technology-based enterprise, looking for new and innovative solutions to enhance our operations.”

What3words had raised around $5 million before this latest round and will use its fresh cash influx to integrate new voice-recognition smarts into its technologies for smartphones, wearables, and the automotive industries, as well as adding Arabic and several additional Asian languages to its platform.

“We are on a mission to change the way people communicate location, to make the world a more efficient, less frustrating, and safer place with three-word addresses,” said Chris Sheldrick, CEO and cofounder of What3words. “Aramex is recognized as one of the most innovative logistics providers in the world, and this partnership will help to propel What3words toward our goal of becoming a global addressing standard.”