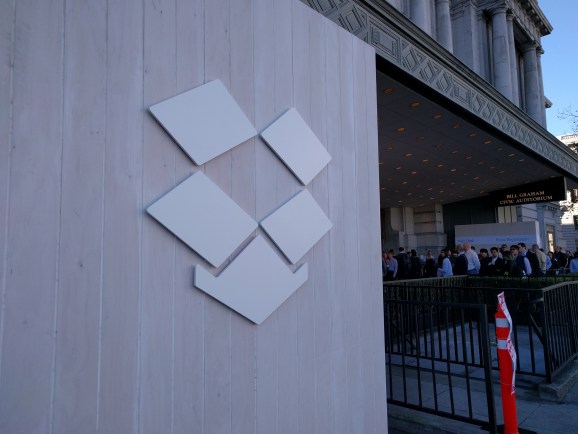 At the Dropbox Open conference in San Francisco on November 4, 2015.

Lepton can both compress and decompress files, and for the latter, it can work while streaming — that is, files can be expanded back into full size as they are being sent over the network. So Lepton is important for user experience, given how it can more quickly transfer data and show content. But at the same time, it has an impact on the data center infrastructure where files often end up.

This type of technology might sound familiar to those who watch the HBO show Silicon Valley. Sure enough, Lepton is “essentially a ‘middle-out’ algorithm” just like the one featured on the show, Reiter Horn wrote. Dropbox has previously discussed data compression in the context of the Weissman Score that’s cited on the television show, but this time there’s real open source code to try out.

There are generic compression algorithms available, including Google’s open source Brotli. Lepton, written primarily in C++, is tuned to work with images, and it cuts off 22 percent of file size for JPEGs, Reiter Horn wrote.

Dropbox occasionally open-sources its software. Previously it has released HackPad and Zulip, among other things. Facebook, Google, Twitter, and other web companies regularly open-source their code to share their technology and get people on the outside collaborating on it. That can lead to improvements or even new hires.