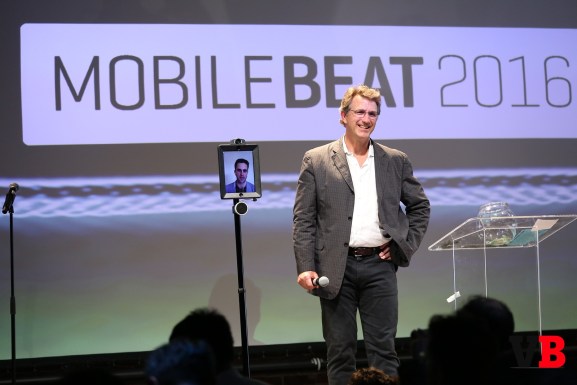 By learning how to pitch his bot idea while driving a robot, Button.ai founder Hugh Cameron of Melbourne, Australia won the popular vote at the first international botathon this week. Button.ai helps teams make quick responses to emails. Organized by VentureBeat, the international botathon took place July 9-10 in New York, Melbourne, Tel Aviv, and San Francisco. A fifth finalist category was made for people participating online elsewhere in the world.

Finals for popular vote and judges’ categories were held Tuesday in San Francisco at MobileBeat, a two-day gathering of chatbot and AI leaders, held July 12-13 at The Village.

The popular vote was won by whipping up votes for six hours on the floor of the exhibition area of MobileBeat. Two teams were present in person, but four of the finalists competed by way of Double 2, a roving video robot by Double Robotics — including Cameron.

Pitching his idea to people through what is effectively an iPad on a stick with wheels was surreal, “something to tell the grandkids about someday,” Cameron said.

People would sometimes walk by and ignore the bot “because you think it’s a bit of tech on wheels, but when you’re chatting to it, all of the sudden the novelty can wear off and you’re having a real conversation.”

“So there were moments on the floor where I was pitching to people, and they were just sort of smiling and obviously giggling about the fact that they were chatting to a robot, but then we had a bit of back and forth about frameworks and different bots and what sort of data you can collect and how emerging it is and that was a real conversation. So it was this really quick shift from ‘oh, it’s a novelty’ to ‘this is real life’,” he said.

When Cameron started at the Blue Chilli startup accelerator in March, he planned to make an iOS app called Chckbx, but changed from iOS app to bots when Slack added buttons last month. Chckbx was rebranded as Button.ai an hour before the beginning of the botathon in Melbourne.

“A couple weeks ago Slack released message buttons in its products, and that changed everything for me. I pivoted my whole product around. So yeah, it’s been a real interesting journey as a founder going from IOS apps to the bot scene,” he said.

Cameron was inspired by the decision memo style of the Obama administration. Each of these documents, according to reporting by The New Yorker, ends by giving the president three options: Agree, Disagree, or Let’s Discuss. Cameron thinks decision making with the touch of a button and bundling work into these three categories can help business managers and teams get stuff done.

“That structure alone, I think, would save a lot of email flow because emails can be bundled,” he said.

In the near future Cameron wants Button.ai to take care of travel requests, expense approvals, and manager approval of actions. Further down the road he wants Button.ai to make recommendations and act as a consultancy and to be able to function within email like Amy, formerly known as X.ai.