And, if Kit has its way, Goals will change the way small businesses hire their first marketer.

We’ve covered Kit at length before. The company’s A.I. bot runs your ecommerce business for you, originally doing so via SMS text messages and now through Facebook Messenger. Earlier this year, Kit added an API to extend its reach beyond emailing your customers, building your Facebook ads, and managing your Instagram-sponsored photos. All of this intelligence attracted the right kind of attention, leading to Shopify acquiring the solution in April 2016.

So what does this new Goals feature do, and why does it matter?

Goals understands where you are in the evolution of your Shopify store and sets targets accordingly. It then helps you reach these objectives, not just through intelligent suggestions — such as calculating how to get your first 100 likes, growing sales by 10 percent in a month, or reaching your 25th sale — but also by working out exactly how much you’ll need to spend on advertising and other growth tactics to get there.

“When a merchant grants Kit access to their Shopify Store and Facebook page, Kit is able to get a sense of what stage their business is at,” Michael Perry, Director of Kit at Shopify, told me. “We believe that we have outlined goals that are appropriate to shoot for, based on those data points. Kit can build a detailed marketing game plan which includes appropriate distribution of ad spend, setting the frequency of social posts, and the right content for email marketing — directly in relation to the goal.”

What that means is that instead of hiring a marketer — or worse, a “Facebook ad guru” (remember, people who call themselves gurus only do so because they can’t spell “charlatan”) — small businesses can employ Kit instead. It can help them not only manage their ecommerce store but also understand how to grow it from day one.

“One thing I really want to emphasize here is we genuinely believe this is a huge step for Kit to best position entrepreneurs for long-term success,” Perry said. “It’s the first time that Kit has built actual marketing agendas to string tasks together to grow [companies’] business, versus the traditional one-off marketing tasks to make one-off sales.”

That’s a big deal, but it is also a lot of responsibility to put on the virtual shoulders of an employee you’ll never see in the flesh. 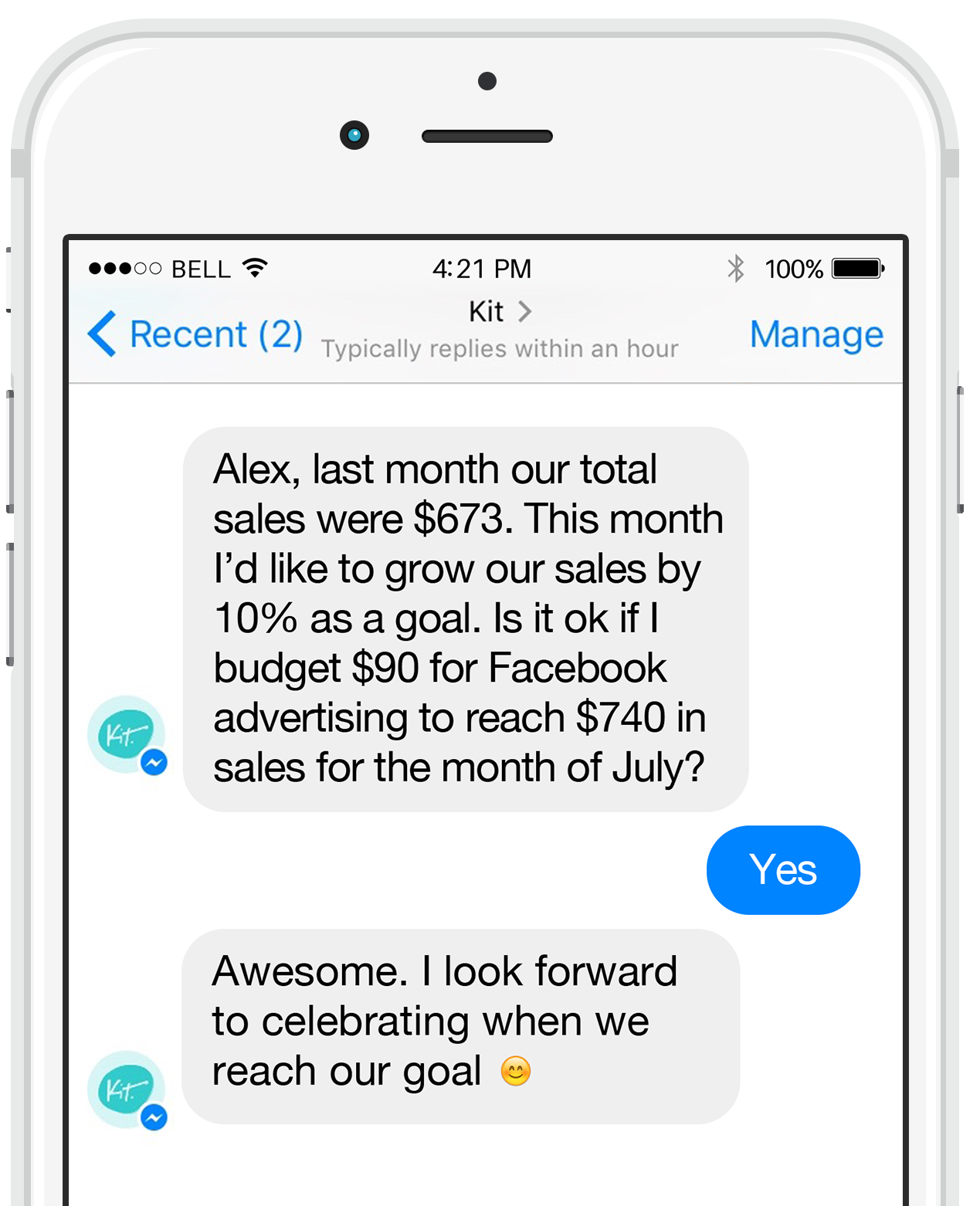 “Like all things with Kit, and colleagues, it requires trust for it to work,” Perry said. “The reason people are hiring Kit is because Kit is more capable of doing their marketing then they are.”

As with anything in life, some people move faster (or slower) than others. What happens if you want to grow at a different rate than Goals suggests? Can you tell the A.I. to be more aggressive or slow things down?

“Yes — owners can set a more aggressive goal for Kit to try and achieve if they are at an appropriate stage of their business to do so,” Perry said. “For example, if you are a company that is just starting on Shopify, and you have no sales history or social data, it wouldn’t make any sense to set a goal for a 25 percent increase in month-on-month sales, so we limit [you] to one goal. If, on the other hand, you are fairly established, and you’d rather have Kit focus on 25 percent growth over 10 percent, Kit will make adjustments to the budget and its marketing agenda to accomplish that goal instead.”

However, after having worked on this feature for more than two years, Perry feels that Kit’s Goals offers a well-balanced target.

So what about integrations? Does Goals interface with other Kit Skills and third-party offerings, and are any of the Kit API partners required to make it work properly?

“The current third-party integrations still work as they normally do — trying to help with one-off marketing tasks,” Perry said. “With that being said, we are working on a ‘Goals API.’ We are hoping to have that end-point released to the developer community soon. We believe this will be a big step in getting all apps working together for the greater good of the merchant.”

That means, in the near future, Goals can help you set the correct discount periods and levels or grow the number of reviews your store needs to stand out.

Kit’s new Goals feature is available from today to Shopify merchants based in the U.S., and the company plans to expand it globally by the end of 2016. Once merchants are connected to a Shopify store, they can sign up for Goals, in addition to Kit’s standard offerings.