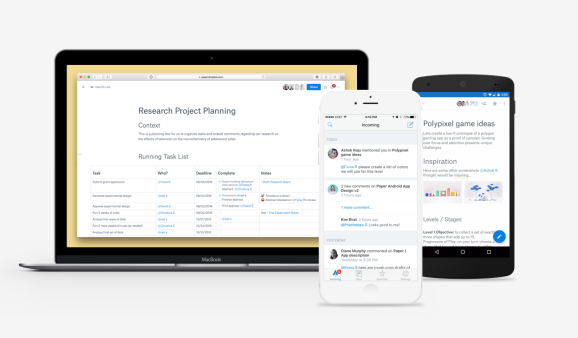 Dropbox today is launching dedicated Android and iOS apps for its Dropbox Paper collaborative note-taking program, which has been previously limited to the web. Also today, Dropbox is graduating Dropbox Paper to open beta, meaning that anyone can start using it right away, and there’s no need to sign up for a waiting list.

Dropbox first started testing out Dropbox Paper under the names Project Composer and Dropbox Notes in mid-2015, following the acquisition of collaborative note-taking app Hackpad, in 2014. The Hackpad code is now available on GitHub under an open-source Apache license.

When you open the new mobile apps, you’ll first be brought to an Incoming section, which shows at-mentions, new comments, and other relevant updates. (On desktop, Dropbox Paper shows notifications for that app, as well as the core Dropbox app; on mobile, you’ll only see Paper notifications.) You can respond to comments right from this Incoming tab. There are also Docs (the most recent documents are first), Favorites (documents that you’ve starred, which lets you use them while offline), and Settings sections. Once you’re inside a specific document you can type, upload photos, integrate files from Dropbox, and add comments.

On desktop, it’s now easy to drag and drop photos within Dropbox Paper documents, and you can more deeply customize tables that you embed in documents, Dropbox Paper product lead Christina Cacioppo told VentureBeat in an interview.

Above: Working on tasks in Dropbox Paper on iOS.

Dropbox Paper is one of many options for people who want to write something and have it saved online. Google Docs, Microsoft Word, Microsoft OneNote, Evernote, Box Notes, and Quip — which this week said it had been acquired by Salesforce — are also available. But the wider launch of Paper and the availability of the mobile apps may win more Dropbox end users and inspire companies to consider it more seriously. Dropbox now has more than 500 million registered users.

Currently, there are no special features available for paying customers of Dropbox, whether they’re in the Pro, Business, or Enterprise tiers. No third-party integrations are available for users to install or for admins to automatically provision for their employees. The one integration Dropbox is highlighting today is the ability to embed Google Docs, Sheets, and Slides documents simply by pasting the link into a Dropbox Paper file — all you have to do is give Dropbox access to your Google account. But there’s certainly room for more functionality from other service providers in future.

Dropbox isn’t letting people edit Dropbox Papers files on the mobile web — you can only view the files there. It’s possible to export Dropbox Paper files in Word (.docx) or Markdown (.md) format, a spokesperson told VentureBeat in an email.

The Dropbox Paper mobile apps are not yet available in the European Union, Cacioppo wrote in a blog post.