Four months ago, Ola executives met with Didi hoping the Chinese firm would invest fresh capital to help it fight Uber Technologies Inc which, with its deeper pockets, has made rapid inroads into India. 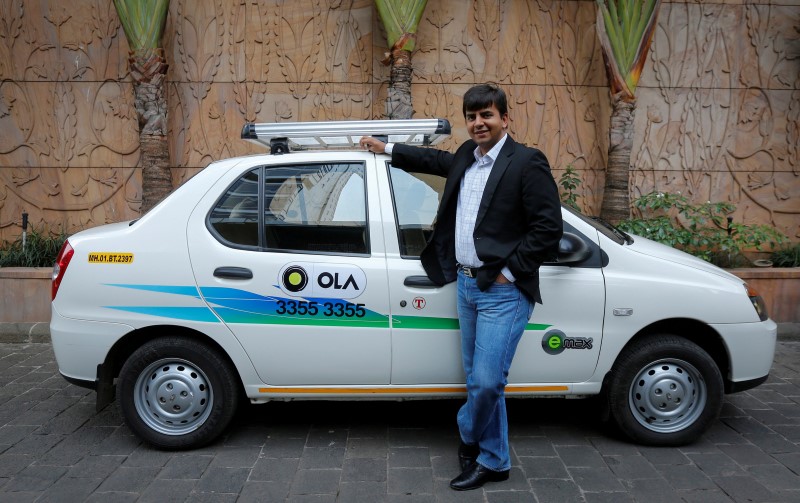 Above: Bhavish Aggarwal, CEO and co-founder of Ola, an app-based cab service provider, poses in front of an Ola cab in Mumbai March 3, 2015. REUTERS/Shailesh Andrade/File Photo

They were told Didi wanted first to sort out its own challenges in China, said a person with direct knowledge of Ola’s plans. Didi and Uber have raised and spent billions of dollars in a discount slugfest to win drivers, passengers and market share in China.

Didi, now worth around $35 billion, last year invested about $30 million in Ola, which is also backed by Japan’s SoftBank Group, and the two are allies in an anti-Uber group that also includes U.S.-based Lyft and Southeast Asia-focused Grab.

“This (Didi/Uber China) deal changes the dynamics of how they (Didi) will invest in India,” said the person, who didn’t want to be named because the discussions were private. If Didi invests more inOla, it’s effectively betting against Uber, its new partner in China, the person said.

It’s not clear whether Didi would provide equity or debt to Ola, which has raised around $1.3 billion in funding and is valued at over $5 billion. SoftBank Capital, Ola’s key investor, faces its own financial issues and is selling assets to raise cash and reduce debt, which may pose another fundraising challenge for Ola, which was aiming to raise another $1 billion this year.

Ola did not respond to an email request for comment. Didi said in an email that it will focus in the coming months on “ensuring smooth integration internally.” It did not comment on its meeting withOla. Didi has no immediate overseas investment plans, said a person with direct knowledge of the matter.

The stakes are high in India, already one of the world’s fastest growing taxi markets. Ola and Uber have burned through investors’ money and clashed in legal battles over alleged dirty-tricks tactics and pricing.

After the Didi deal, Uber is even more focused on India, which it has previously called its No. 2 priority overseas market, doubling down on resources, staffing and technology deployed there, said two people familiar with Uber’s plans, one of whom is based in the United States.

Ola, founded by two graduates from India’s premier technology institute, commands half of the country’s taxi market as of end-June in terms of the number of cars registered on its platform, according to Counterpoint Research, with Uber on around 30 percent market share, and catching fast.

Uber has previously launched a bike taxi and autos service in India – a sign that it wants to localize transport options and a lesson from China where it focused on privately-owned cars in big cities, where car ownership has historically been low.

In February, Uber opened an engineering center in Bengaluru and has, according to LinkedIn, brought in ex-Google executive Apurva Dalal to lead its India product build. It has also hired more than three dozen engineers in India in six months and plans to add dozens more by the end of the year, said one of the people familiar with Uber’s plans.

While Uber has pushed into cities and markets worldwide, Ola operates only in its home market.Ola is in 102 cities versus Uber’s 27, according to Counterpoint, and offers a wider range of products – from auto rickshaws to shuttle buses, as well as taxi rides.

The Didi/Uber deal “will put Ola in a corner, and the pressure will rise,” said Neil Shah, research director at Counterpoint. “The money Ola has will not last forever and it will require a lot of funding with Uber gaining financial strength.”

(Reporting by Aditya Kalra and Aditi Shah, with additional reporting by Heather Somerville in San Francisco; Editing by Euan Rocha and Ian Geoghegan)