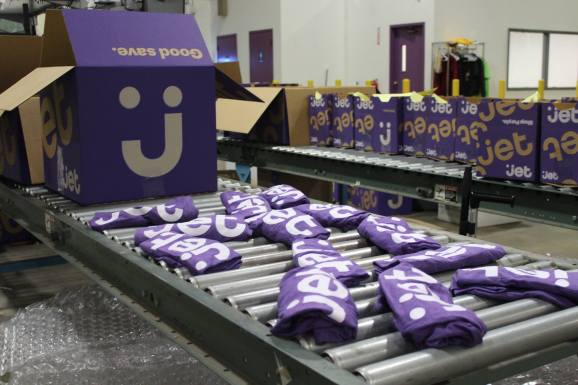 In honor of the launch of JetGear, Jet.com surprised 1,000 customers by adding branded company t-shirts in their orders.

Walmart has confirmed its intentions to acquire online retailer Jet.com for $3 billion in cash.

Rumors suggesting that Walmart was lining up a move for Jet.com first started circulating last week and were given further credence yesterday as fresh reports emerged that a deal had been reached between the two companies.

In a nutshell, Jet.com promises to deliver cheaper prices on myriad goods by encouraging users to buy more items at the same time or to purchase products located in the same distribution center — thereby cutting collection and shipping costs. Other cost-cutting measures include allowing shoppers to opt out of free merchandise returns in exchange for discounts at checkout.

Now, Walmart wants a piece of the pie.

“We’re looking for ways to lower prices, broaden our assortment, and offer the simplest, easiest shopping experience because that’s what our customers want,” said Doug McMillon, president and CEO of Walmart, in a press release. “We believe the acquisition of Jet accelerates our progress across these priorities. Walmart.com will grow faster, the seamless shopping experience we’re pursuing will happen quicker, and we’ll enable the Jet brand to be even more successful in a shorter period of time. Our customers will win. It’s another jolt of entrepreneurial spirit being injected into Walmart.”

Cofounded by Marc Lore, the man who sold Diapers.com to Amazon in 2010 for $540 million, Jet.com had secured a $600 million valuation in early 2015 off the back of significant VC investment — before it had even gone to market. Five months later, in July 2015, Jet.com finally launched as a competitor to the likes of Amazon, Walmart, and other giants of the retail world.

As a result of the deal, Walmart and Jet will retain their separate brands and identities and continue doing what they’re currently doing, but combining the technological smarts from both companies to “develop new offerings to help customers save time and money,” the company said in a statement.

“We started Jet with the vision of creating a new shopping experience,” Lore said. “Today, I couldn’t be more excited that we will be joining with Walmart to help fuel the realization of that vision. The combination of Walmart’s retail expertise, purchasing scale, sourcing capabilities, distribution footprint, and digital assets – together with the team, technology, and business we have built here at Jet – will allow us to deliver more value to customers.”

With 140 million foot customers each week, Walmart is one of the biggest retailers in the U.S. The company recently completed the rollout of its in-store Walmart Pay service, which many view as an attempt to take on the likes of Apple, Google, and Samsung in the mobile payments space. However, Walmart has hinted that the feature was intended to make it easier to buy things in physical retail stores, meaning that it was an attempt to keep people away from online stores, such as Amazon, by making the brick-and-mortar checkout experience more seamless.

“It was really a design around improving checkout, not just payment,” explained Daniel Eckert, senior vice president of services at Walmart, in an interview with Fortune earlier this year. “When we looked at checkout, there was still friction in the process.”

Despite Walmart’s attempts to keep foot traffic coming through its doors, there is no ignoring the importance of ecommerce. In Q1 this year, Walmart reported online sales growth of 7 percent, down from 8 percent, 10 percent, 16 percent, and 17 percent in the previous four quarters. Amazon, by contrast, saw sales grow by 28 percent over the same quarter.

Moreover, Walmart’s online growth fell significantly below the industry-wide rate of 15.1 percent, according to data from U.S. Department of Commerce, leading McMillon to call its online growth “too slow.” With this Jet.com acquisition, Walmart has taken a notable step toward thwarting the mighty Amazon on its home turf, but only time will tell if it will be enough.

The acquisition is, of course, still subject to regulatory approval, but the green light has been given by the respective boards for each company. The deal is expected to close later in 2016.