This week’s “cat and mouse” game between Facebook and ad blocking software is being framed as a battle over the best interests of Facebook users. But caught in the crossfire are publishers, and by extension their readers. And when it’s over, publishers will be little more than collateral damage.

The publisher-Facebook relationship that once seemed so mutually beneficial now becomes “complicated,” to say the least. Even as recent news feed changes have hurt the reach of publishers, Facebook’s aggressive stand against ad blocking might suggest that the company is on the side of publishers. But Facebook’s actions are going to have grave, likely unintended, consequences.

Publishers, already kicked to the curb by sudden news feed changes, need to wake up and see Facebook not just as a competitor for advertising dollars, but as a capricious lover who has seduced them with empty promises and is now casting them aside.

You may think of Facebook as a benign social network, but don’t forget that the company is also an ad-supported giant: For the second quarter of 2016, Facebook reported $6.24 billion from advertising sales, or 97 percent of its total revenues. No wonder. Each time the behemoth tweaks its news feed, the company uses marketspeak to disguise its revenue-increasing product enhancements as helping its users:

Building a Better News Feed for You

A New Way to Control the Ads You See on Facebook, and an Update on Ad Blocking

After all, Facebook’s mission “is to give people the power to share and make the world more open and connected.” Yet the desired result of each so-called improvement is to help Facebook earn more ad dollars. I doubt anyone faults them for seeking profits — I don’t. But let’s call a spade a spade. Each time Facebook behaves more like an ad-supported media company, it become less of a way to “stay connected with friends and family.”

And as a media company, Facebook is in competition for readers and advertising dollars. It may not matter that you, a Facebook user, have elected to see posts from various media outlets in your news feed. You don’t control your news feed, Facebook does. If Facebook deems news headlines to be clickbait or determines for you that an article from a publisher you’ve “liked” is beyond your known interests, then you won’t see it.

The bigger punch in the throat for publishers, however, has to do with ad blocking. The company’s announcement this week about circumventing ad blockers and delivering only carefully targeted ads may prove fatal for those publishers who still see Facebook as their salvation. And it doesn’t matter that Adblock Plus had already responded with a workaround to block ads on Facebook. Or that Facebook may be hiding content from users who fortify their ad blockers with extra stopping power. 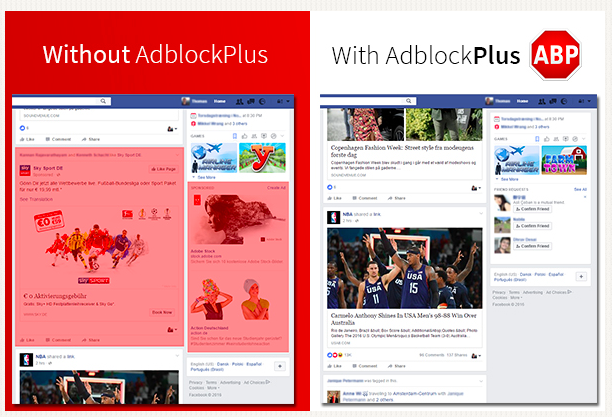 Today ad-supported media sites lose an estimated $20 billion annually to ad blockers and are faced with a devil’s bargain: Install anti-ad-blocking software like Bloomberg, Forbes, and Wired did and risk driving away readers, or allow those readers using ad-blockers to effectively steal their content.

Despite discussion and some consensus about serving better ads, limiting interstitial pop-ups and even eliminating auto-playing video ads, the battle is framed as a zero-sum game. Ad-blocking and anti-ad-blocking software are very blunt tools, the equivalent of using sledgehammers in a game of croquet. Some, if not most, publishers lack the resources to refine their ad delivery strategies or the scale to make such an investment worthwhile. And it’s here that Facebook’s strategy hurts publishers. 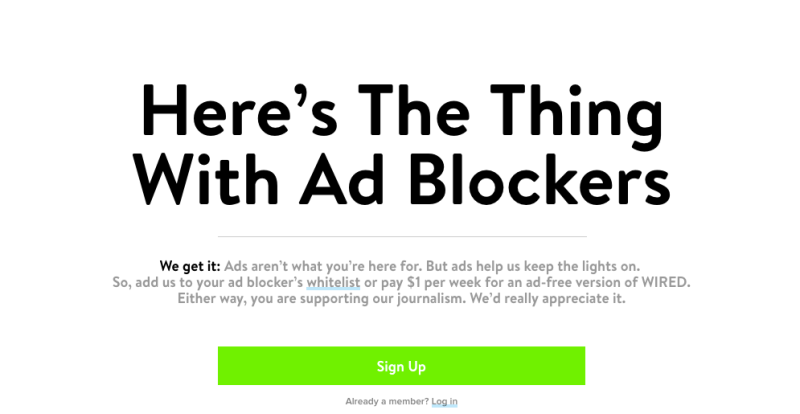 Facebook has unmatched resources and scale to engage in a technological arms race with Adblock Plus. “As we offer people more powerful controls, we’ll also begin showing ads on Facebook desktop for people who currently use ad blocking software,” the company wrote with apparent technological omnipotence. Facebook has legions of engineers to pit against the open source developers who support Adblock Plus. No traditional media company has similar resources.

And based on my personal experience, Facebook’s initial anti-ad blocking shield is working as promised. I’m still seeing ads, but fewer of them, and they do seem better suited to my interests.  (I have not installed the ABP workaround yet.) Wow. As a reader who understands the business necessity of looking at ads, I wish all news sites could serve ads to me this way.

By comparison, the best most publishers can do is flash a pop-up and instruct readers to disable their ad blockers or take a hike. 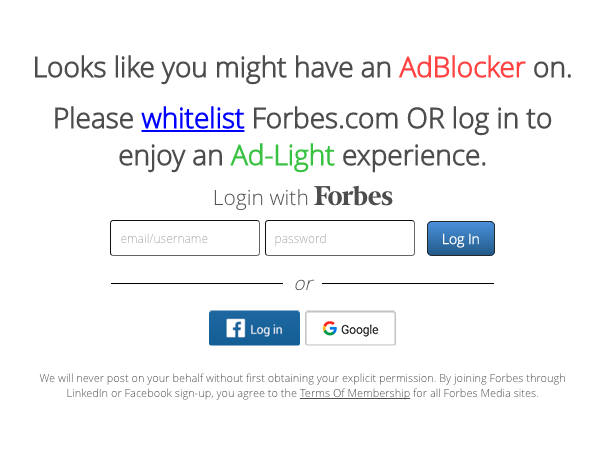 And here’s where the publisher-Facebook relationship gets more complicated even as it seems to be offering a middle ground in the ad blocking wars for publishers. Whereas once Facebook promised salvation with its ever-expanding universe of potential readers, the social network is now poised to garner an ever bigger share of the world’s ad dollars — at the expense of media companies.

Facebook always seems to find new ways to make itself more attractive — and more addictive — to publishers, but time has shown that the more publishers depend on Facebook, the worse they are treated. Media companies thus have a second devil’s bargain: Publish to Facebook with Instant Articles and count on the network to defeat ad blockers, even if it means that news stories are being de-prioritized and hence viewed by fewer people; or, well, go take a hike.

It’s a messy situation for publishers, and there’s got to be room for better approaches than either Facebook dependence or anti-ad-blocking. A pay-as-you read donation service called Flattr launched in May, but ran into problems with Apple. The Information pursues a subscription model and seems to largely eschew Facebook. The distribution challenge for media is like a dog chasing its tail, and in the end only publishers themselves can solve their ad-blocking problems.

It’s worth noting that publishers are focusing on Facebook just as they did Google a few years ago. Back then it seemed that publishers who fought Google’s indexing of their sites were losing out, just like publishers who don’t embrace Facebook today are also losing out. However, just as Google gobbled up advertising dollars that would have been spent on print media, Facebook is devouring the advertising dollars that would have been spent on digital media. Its attacks on ad blockers are just more steely knives to kill the media beast.