But that doesn’t mean everything is rosy in the app sales garden. Oh no.

New research released today by ARC from Applause — which takes in data from 1.2 million app store reviews across Google Play and the Apple App Store — shows that some of the top retailers in the U.S. and the U.K. are failing to delight users, and it confirms that there is still a long way to go.

The surprise winner in this report is Groupon. The top-rated retail app — scoring 83 out of 100, on average — it is doing remarkably well as an app. While Groupon has had to deal with its share of troubles after the daily deals market fell apart, the company’s mobile apps were not to blame.

On the other end of the scale, eleven major brands scored less than 35 in customer satisfaction — these include Cnova, FreshDirect, Staples, Abercrombie & Fitch, GNC, Hallmark (Channel), 1Sale, Gap, Disney Store, Toys “R” Us, and Sainsbury’s. Poor review scores means these behemoths of retail are leaving money on the table, as increased dissatisfaction leads to uninstalls, complaints, and abandoned revenue opportunities.

There is one glaring omission in the report, however. Amazon isn’t listed in the study, while other pure play retailers are. What is the reason behind that?

“Amazon very nearly made the list of retail app leaders with a percent of 2015 sales through mobile apps of 35 percent,” Ben Gray, digital experience analyst at Applause, told me. “However, to qualify for the top 50 required a score of 40 percent or greater. Amazon will continue to thrive, considering the fact that they sit atop lists like the Mobile 500 — with $28 billion in mobile sales. And there’s no denying that most retailers look to Amazon as their benchmark for comparison.”

Most improved? Etsy, whose sentiment score has improved significantly from 49 last year to 61.5 now. 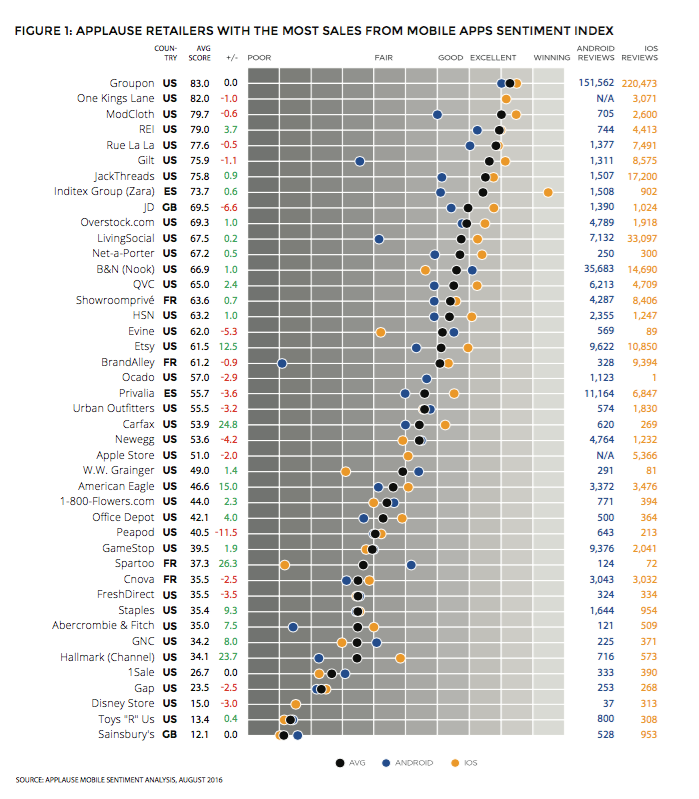 “Etsy updates its apps every two weeks, and going back to June 2015, its mobile sentiment level has nearly doubled,” Gray said. “Some of the notable feature releases include Etsy ASAP (buy from a local seller and get it delivered same-day), Etsy Local (find nearby sellers) and promotions tied to shopping events, such as Christmas, Valentine’s Day, and Back-to-School season.”

M-commerce is thriving right now. Research from VB Insight shows that it has a much higher growth rate than ecommerce or in-store retail, yet m-commerce still makes up a small portion of the money we spend in-store each year. What is going to change that?

“Mobile has served as a — if not the — priority for retailers since 2014, and m-commerce growth will be driven via improved technology platforms, smarter customer experience strategies, and enhanced UIs,” Gray said. “The report serves to highlight the mobile retail leaders that are driving the most significant app sales, so those that didn’t make the list have inspiration to improve and leaders to emulate.”

And what are the significant additional drivers for growth in this space?

The full report is available to read today from the ARC via the Applause website.