Facebook, Twitter, and YouTube are just some of the services encouraging us to broadcast what we’re doing at this very moment. Whether your content is live or recorded, these social networks are eager to help you share footage with the world. But what if you’re not interested in the big network effect, instead seeking a private environment? None really exist right now, at least none with a private setting as its default.

Alively wants to capitalize on this opportunity and is launching today as a video platform where you can share livestreamed or recorded footage with select friends and family.

Started by Vadim Lavrusik, a former Facebook product manager who worked on the company’s live video feature, and Ray Lee and Vincent Tuscano, both founders of Upfront Media Group, Alively takes a different approach to broadcasting. It’s not about giving a performance, instead, the focus is on the “purity of sharing every day’s moment.”

“We want to make it easy and fun to capture and share those everyday moments as they happen with friends,” the company explained in a statement. “Real moments that go beyond the highlight reel. Moments that people in our lives wouldn’t want to miss. Shared moments, in real time. We think the best way to do that is through high quality, privately shared live video, so friends can share and experience that moment with you as if they’re there.”

Switching from broadcasting to narrowcasting

In fact, using Alively is less about hearts or likes — the app doesn’t have any affirmation capabilities — and more about sharing high-quality videos with friends and family in a simple manner. Viewers don’t need to have the app installed to watch footage, as it can be transmitted through SMS, a medium Lavrusik described as the dominant way friends share videos.

Usually, if you send video through SMS, the experience is less than stellar, as you’re passing along a hyperlink to the video that, when clicked, will open in a mobile browser. What’s more, the clip is typically low quality. But if you receive an Alively link in an SMS, it’ll automatically play within the messaging app and in its original quality.

The app doesn’t use Facebook Login, Twitter OAuth, or Google to authenticate. When you sign up for an account, you’ll use your phone number to receive an SMS message with a confirmation code. Enter that into the app and complete the registration with your name, username, and password. Then set permissions to enable the camera, notifications, and access to your address book. 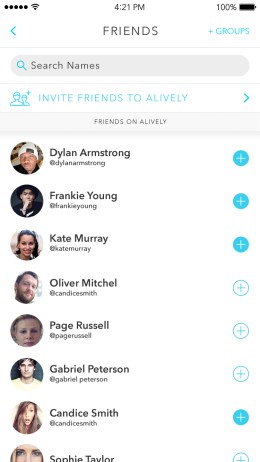 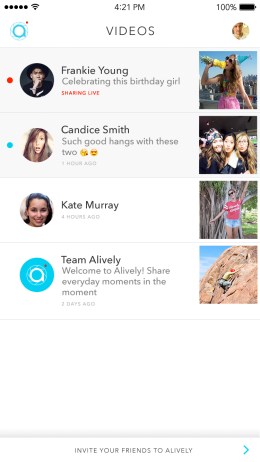 To begin broadcasting a live video, select the people you want to have watch, using information from your device’s contact list. If you forget to add someone, don’t worry — you can add them at any time during the livestream. The only feedback you’ll receive is if someone is watching or leaves a comment.

What makes this different from Facebook Live and Periscope is that each recording can be tailored to specific viewers, meaning that your friends won’t see all your videos. You can specify which of your contacts have access to specific videos, and you can rescind access at any time without them knowing.

When you’re done recording, the footage is stored on the app’s servers in the cloud, eliminating the concern people have about video taking up too much memory on their device. Lavrusik said that there’s no limit to how much can be stored and claimed that the company has “unique technology” on its servers that compresses the file so it takes up 1/6th of the space. “We don’t want to limit the bar or potential,” he said. “We want to see what the initial user behavior will be.” 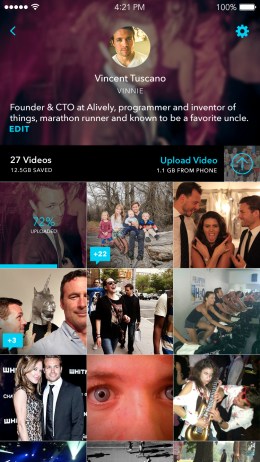 Files are automatically routed to the cloud, meaning users aren’t given an option about where to store their video. Unfortunately, at this time, you’re not able to download videos directly from Alively’s server, although that’s probably something the company is working on in future updates.

In another hitch, videos on this service can only be viewed on a mobile device. If you try to watch something on the desktop, it’ll be blocked. You can watch when in a mobile browser, but you won’t be able to leave a comment.

Unlike Periscope, Alively’s replays are everlasting from the get-go.

Some of the use cases the company sees are with teenagers and young moms. In contrast to millennials, today’s teenagers are not interested in airing their lives to the public — they want to share experiences with a small group of friends, hence the growth of Snapchat. As for mothers, they want to capture footage of their kids and pass it along to their family members, but a big issue for them is storage. Of course, Alively can address these concerns.

“We wanted to create a modern day camcorder for capturing those every day moments and sharing them in the moment with the people who care about them most,” Lavrusik said.

And there are likely quite a few instances where families and friends might want to share events with a few of their near and dear: reunions, weddings, graduations, and more.

It’s not surprising that Lavrusik would dive into the video and social space. His background — at Mashable as community manager, and at Facebook, where he worked on the team behind Facebook’s Mentions app and live video capability — gives this first-time entrepreneur considerable experience in the space.

“I learned a ton from working on Facebook Live about what motivates people to not only share live, but also watch live,” he told VentureBeat. “But the thing we’re really focused on is creating a good experience for narrowcasting rather than broadcasting — sharing live or recorded video to just a few people. Sharing live is just one of the formats for sharing in Alively that lets people bring their friends into the moment as it’s happening. But we also let them share or watch later.”

Lavrusik said that this private video space is untapped, as everyone in live video is currently focused on other areas. YouNow, Twitch, Periscope, and Facebook are all about how many viewers you have and how many hearts you get, but this isn’t something that friends are interested in — they just want to see videos that matter to them.

“We are starting with personal moments and trying to tackle that use case, betting that making live video feel more intimate and seeing it from people who are close to you will make people more comfortable with not only watching but creating and sharing more of these moments in the moment. Most everyone in the space is focused on performance/entertainment and eye witness use cases.”

Granted, Facebook does offer granular controls that allow anyone to limit who sees their posts, but how often do people really change the default settings?

Is Lavrusik worried about competing with his former employer? He’s not, because Facebook Live was designed with the public in mind — it’s great for sharing with a lot of people.

Alively is free to use, but it is currently only available for iOS and to those in the U.S. There are plans to make the app available in more countries in the coming months.

The company has raised $800,000 in seed funding from investors Greylock, SV Angel, and others.