Four years ago, Advanced Micro Devices went back to the drawing board. With a new chief executive, Lisa Su, and a mandate to do something big, a small team of chip designers started thinking about how to boost processing speeds without generating too much power.

They came up with Zen, AMD’s newest core, and a plan for a family of chips that could be the most competitive in a decade. Those chips haven’t launched yet, and AMD’s bad luck in competing against Intel, the world’s biggest chip maker, suggests that the company shouldn’t count its chickens before they hatch. But analysts say that AMD may have its most competitive processors in years when they launch at the end of 2016 and early 2017.

Michael Clark, AMD senior fellow and design engineer for Zen, disclosed more details in a presentation at the Hot Chips conference on Tuesday in Cupertino, Calif. I interviewed Clark in advance of his talk, and I also attended AMD’s big unveiling event last week. If AMD can execute on Zen, it could launch an offensive at the heart of Intel’s many-billion-dollar microprocessor business.

“All of this sounds incredibly positive,” said Patrick Moorhead, analyst at Moor Insights & Strategy. “There’s a lot of execution between now and launch, but at a minimum, I believe AMD will be in a much better position than they have been in years in processors. To put this in perspective, this is the biggest thing I’ve seen in 10 years in [central processing units] at AMD.” 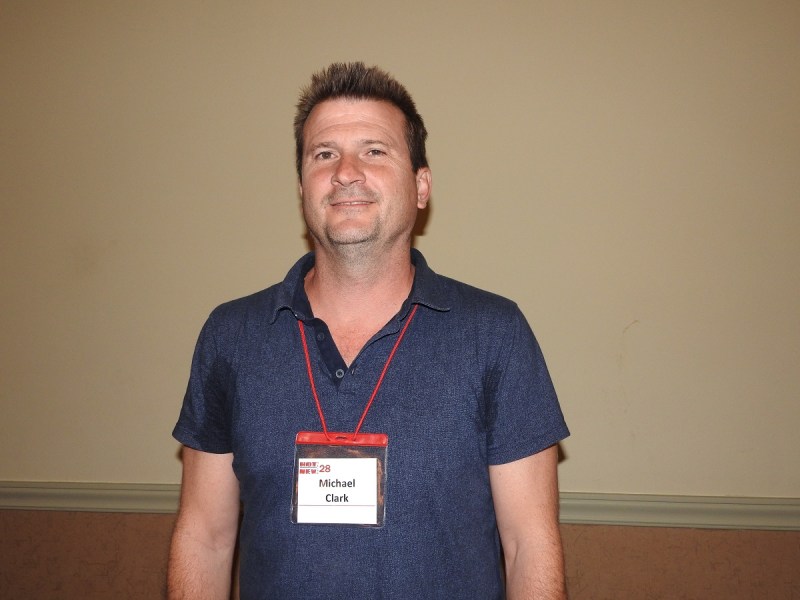 Above: Michael Clark, AMD fellow and an architect of Zen.

Last week, Su and Mark Papermaster, chief technology officer at AMD, said that the “breakthrough performance” of Zen can challenge Intel’s fastest processor to date — the 10-core Broadwell-E processor. In a benchmark test with working Zen silicon, they showed that Zen-based chips could go toe-to-toe with Broadwell. Over time, AMD says the chip will go into new kinds of thin laptops, high-end game computers, and data center servers. Zen is the work of hundreds of AMD engineers. It is also the product of AMD’s decision to cut back and refocus on just one thing that it could do right.

“Our leaders gave us the freedom to do what we thought was right,” Clark said.

AMD’s first two chips based on the Zen cores are the eight-core (16-thread) Summit Ridge desktop processor and a 32-core (64-thread) Naples processor for servers. The Summit Ridge chips are expected to debut in the fourth quarter, while Naples is expected to debut in the first half of 2017, followed by laptop chips in the second half of 2017. Of course, that gives Intel plenty of time to catch up, said Martin Reynolds, an analyst at Gartner who remains cautious about AMD’s claims.

“They [AMD] really have to execute,” said Reynolds in an interview last week. “Obviously, we’ll have to wait until we see the final product. All of the changes they made in the architecture are the things they need to fix. We don’t have enough information to know if it will beat Intel.”

Intel is about to unleash its 7th Generation Core processors, which should form the heart of its product line for the next year. The company is also working on new Xeon Phi processors for release in 2017. And Intel also typically moves to new manufacturing processes faster than AMD can, giving Intel a natural advantage in the processor wars. But AMD is optimistic.

“We know we’re going to be competitive with Intel,” Clark said.

AMD is using contract chip manufacturer GlobalFoundries to manufacture the chips. The chip maker is using a 14-nanometer process known as FinFET, which delivers improvements to power efficiency and performance. The FinFET technology gives AMD a fighting chance to be on par with Intel in manufacturing-based performance. 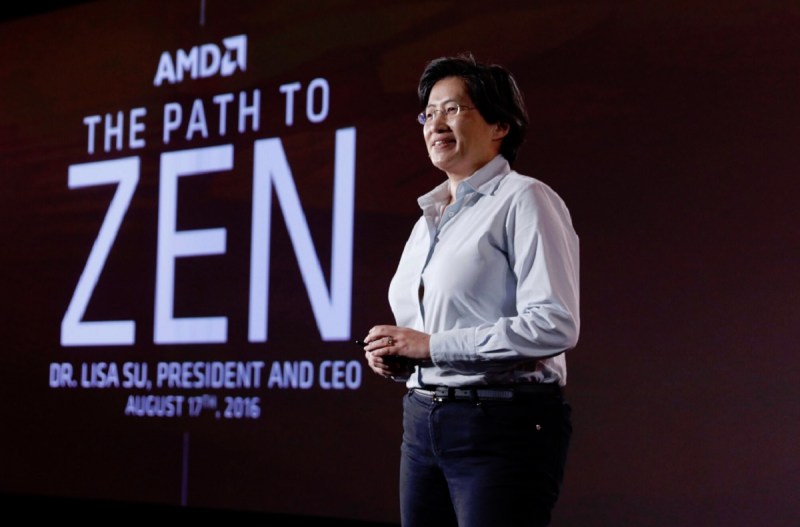 But Clark contended that Summit Ridge has a 40 percent instruction-per-clock improvement. This means that a 3-gigahertz Zen processor is 1.4 times faster than a predecessor processor (the Excavator core) running at 3 gigahertz. Papermaster called that a “landmark” improvement in performance that was made possible by clever redesigns of secondary memory, dubbed “cache.”

Papermaster said Zen is based on a clean sheet design. And a big piece of the thinking was about how to rein in power consumption.

“Our team made energy-efficiency a full citizen from day one,” Papermaster said. “What is truly defying convention is we are using less energy per cycle.”

“We created a power team from day one of the microarchitecture,” said Clark. “It’s a lot of work to do 40 percent more work per cycle, but not make the power go up 40 percent.”

The specific design improvements include a new cache hierarchy, improved branch prediction, and simultaneous multithreading. These changes allow AMD to fetch data faster, predict what kind of data has to be used, and process more instructions at the same time. AMD’s own design techniques turn off power in parts of the chip that aren’t being used.

“We can monitor the power with tracking tools during the design process,” Clark said. “We can trade off features versus the power. You can see where you made a bad decision, where the architecture is out of balance. We had good tools for timing and performance.” 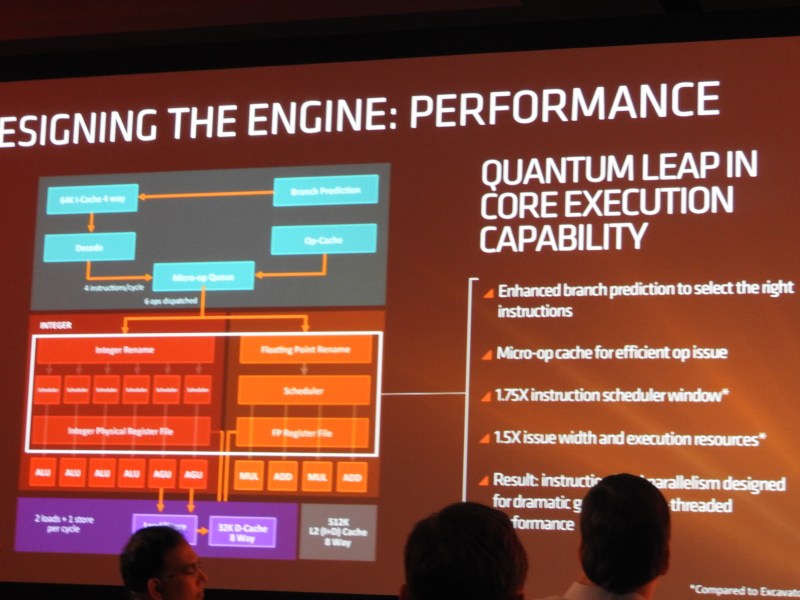 Above: The Zen architecture

Power has been a problem for a long time with the x86 (Intel-based) architecture. The x86 architecture has variable-length instructions. It’s hard to process a lot of those instructions simultaneously, which results in a long execution pipeline that burns a lot of power, Clark said. AMD also tries to predict the data and instructions it will need next, through branch prediction. Most modern processors do branch prediction, but AMD tried to double down in the name of keeping the processor busy and running efficiently.

The micro-ops cache allows the processor to remember previously launched instructions, and that means it can process them faster the next time around. The better cache system also means that a processing element won’t remain idle while it’s waiting for data to be fetched. AMD’s Zen can dispatch six micro-ops per cycle, compared to four previously. While it made the processor faster, AMD tried to stop it from becoming more complex, Clark said.

Clark added that AMD isn’t stopping with the first announcements of its Zen-based chips. More products are on the way, and there’s going to be life after Zen, as well.

“Zen is the first spot on a longer road, and we’re going to continue to push x86 core performance,” Clark said. “AMD is back. We’re also back to stay.”