Corporate giants are in an all-out race to dominate the widely coveted Internet of Things (IoT) landscape. Today, eight companies with market capitalizations over $150 billion actively promote IoT solutions: Google, Microsoft, Amazon, General Electric, AT&T, Verizon, IBM, and Cisco. When you take away the cloud, computing, and telecommunications players, you’re left with an interesting face off between General Electric and Cisco — both of which are targeting industrial IoT. The duel between the two giants is going to be interesting to watch, especially as they reinvent themselves in order to adapt to the IoT market.

Research firm IDC shows that the dollars being invested in Iot match the enthusiasm we’re hearing.

U.S. organizations will invest more than $232 billion in Internet of Things hardware, software, services, and connectivity this year. And IDC expects U.S. IoT revenues will experience a compound annual growth rate of 16.1 percent over the 2015-2019 forecast period, reaching more than $357 billion in 2019. 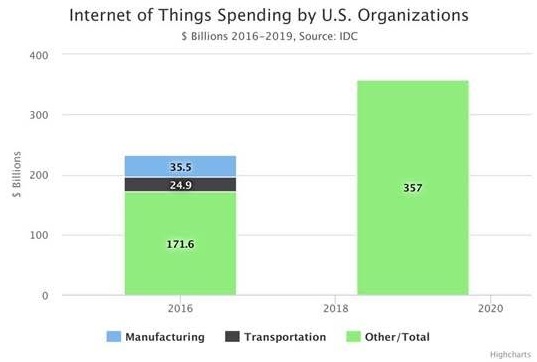 Given the stakes, GE and Cisco are hoping to prove themselves trusted partners for IoT solutions. Let’s examine each company’s approach.

For several years, GE has been on an all-out mission to transform itself.

On GE.com, the company bills itself as

In 2014, GE announced the forthcoming availability of Predix, the IoT platform it developed based on the Cloud Foundry platform from Pivotal. GE made that bet as far back as April 2013, if not earlier, when it invested $105 million for 10% of Pivotal, a company that spun out of EMC and VMware to help other enterprises accelerate development of new software applications.

GE firmly believes that its roots in industrial business, combined with its financial and technological investments in a modern cloud platform like Cloud Foundry, will enable it to seize the IoT opportunity.

“There is an incredible value around the asset in the industrial Internet that doesn’t exist in enterprise or the consumer Internet.”

“In order for us to pull this off, we are going to have to create a horizontal company, a software analytics company, within GE.”

And most interestingly, a comment picked up widely across Internet news and social media, shows how deep GE plans to go with this digital transformation:

“No matter where you enter the company, you are going to learn to code. Everybody. 100%.”

With IDC predicting the strongest IoT segments in manufacturing operations, transportation, and smart buildings, GE has a lot to offer. Of course, the company’s revenues lean towards power, aviation, and healthcare, but there are also billion dollar businesses in transportation, and appliances and lighting. 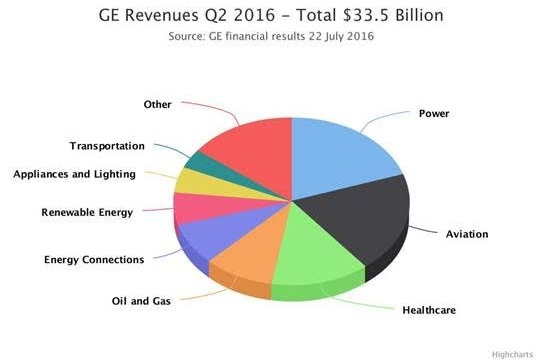 Cisco: A networked future for IoT

Cisco, the king of networking, is taking a different approach to the Internet of Things, using its strength in connectivity to deliver relevant solutions for the IoT market. Customer highlights from its IoT Systems At-A-Glance overview include:

Cisco further details its IoT System across six technology pillars: Cisco Fog Computing, Network Connectivity, Physical and Cybersecurity, Data Analytics, Management and Automation, and Application Platform. But the details of this are far less forward-facing then the Predix details GE shared. Cisco does have some collaboration with Pivotal Cloud Foundry, but it does not appear to be making this a front-and-center focus of its IoT strategy.

Rather, the most ambitious move by Cisco so far in the IoT space has been its $1.4 billion acquisition of Jasper Technologies, announced in February 2016 and completed a month later in March.

Of course, the Cisco revenue mix is still that of a networking company, as you can see in the following chart. 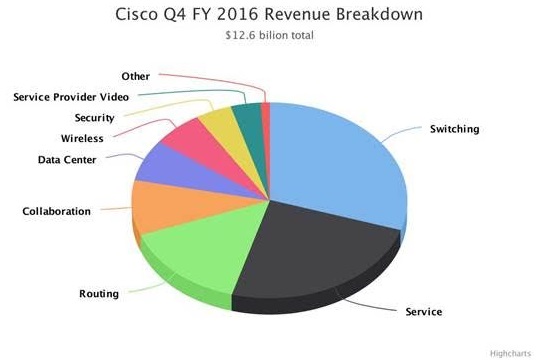 Perhaps that is part of the reason why, during a recent reorganization, the company emphasized a shift to areas such as security, Internet of Things, and cloud.

Coopetition and the race ahead

Of course, it is impossible for GE and Cisco not to collaborate. Last year, they announced joint efforts to accelerate manufacturing productivity. Still, news in 2016 of Cisco and GE working together is sparse.

We are just in the early stages of IoT, and it remains to be seen how a network-centric approach from a company like Cisco will play out compared to an industrial equipment approach from the likes of GE. No doubt we have more to watch in this white hot sector.

Gary Orenstein is Chief Marketing Officer at MemSQL, provider of a database platform for real-time analytics. Follow him on Twitter @garyorenstein.